Space’sX CRS-21 Cargo Dragon returned to Earth from the ISS today, January 13, 2021, splashing down off the coast of Florida for the first time ever. The ship also succeeded in the first-ever autonomous undocking. 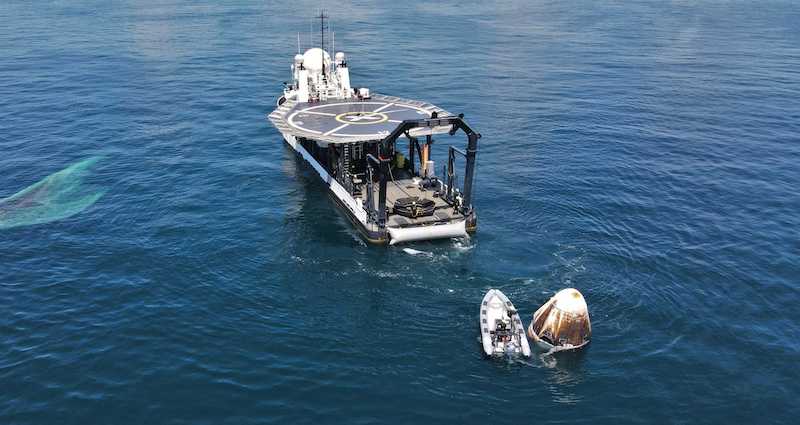 SpaceX made history again, when the private space company’s CRS-21 Cargo Dragon returned to Earth from the International Space Station (ISS) on January 13, 2021, splashing down off the coast of Florida for the first time ever. The ship also succeeded in the world’s first-ever autonomous (self-governing) undocking, after it undocked from the ISS Harmony module just one day prior.

The Cargo Dragon’s splashdown wasn’t broadcast, but it’s sure to inspire discussion online about this recent change. Previously, all Dragon spacecraft splashed down in the Pacific Ocean, far away from the science processing center at NASA’s Kennedy Space Center in Florida. While not a bad receiving site, this posed complications that put time-critical science experiments at risk. Hauling the experiments from the landing site to the Kennedy Space Center could take hours to days at a time. Landing just off the western coast of Florida, however, could make the new turnaround time for experiment analysis as little as four hours after splashdown. NASA said in a statement:

SpaceX staff assisting at the GO Navigator recovery ship hoisted the capsule aboard its deck after splashdown.

Another new feature introduced in this Cargo Dragon return is its upgraded size; it can carry up to 20% more cargo than earlier versions of the craft. The recovered cargo included 5,200 pounds (2,500 kg) of science experiments and other gear. According to Space.com, some of the returning experiments include investigations into cardiovascular cells, biofilms that could corrode stainless steel spacecraft structures, and techniques to assist with deep-space emergency navigation.

There were also several small “passengers” onboard, if you count live mice, who are assisting with long-term studies into why astronaut eyesight changes in space.

Previous Cargo Dragon spacecraft were attached and removed from the space station using the station’s robotic Canadarm2. Tuesday’s undocking also marked the end of the first time two Dragons had been simultaneously docked to ISS. Today, the SpaceX Crew Dragon remains docked to ISS, still part of its current Expedition 64. The Crew Dragon will return to Earth later this year; more on that below.

The historic undocking was broadcast live at 9:05 a.m. EST (14:05 UTC) via NASA’s streaming platform NASA TV. The undocking event had been originally scheduled for January 11, but bad weather at the spacecraft recovery zone prompted a one-day delay. Astronauts currently aboard the space station monitored the departure, including Victor Glover, a pilot on the first operational flight of the Crew Dragon. He bid farewell to the ship, exclaiming:

Godspeed, Cargo Dragon and to the recovery team.

Cargo Dragon is a supply ship with a design derived from SpaceX’s human-rated Crew Dragon vehicle. Crew Dragon brought Expedition 64’s international crew of four astronauts currently living on the ISS to the station, following a successful launch on the first NASA-certified commercial human spacecraft system in history. The NASA-SpaceX mission formally known as Crew-1 lifted off from the Kennedy Space Center on November 15, 2020. SpaceNews wrote that it set a number of record firsts: Glover is going to be the first black astronaut to make a long-duration ISS flight. Soichi Noguchi was the first Japanese astronaut to fly on three separate spacecraft into orbit: the shuttle, the Soyuz, and the Crew Dragon. The mission is the Federal Aviation Administration’s first commercially approved crewed orbital flight.

Upcoming events on SpaceX’s agenda include rocket launches, sky events, missions and more. While unknown how many of these plans will come to fruition in the new year, the son of the company’s CEO Elon Musk appears to have good feelings. Musk tweeted:

Bottom line: Space’sX CRS-21 Cargo Dragon returned to Earth from the International Space Station on January 13, 2021, splashing down off the coast of Florida for the first time ever. The ship also succeeded in the testing of several new vehicle upgrades as well as the world’s first-ever autonomous (self-governing) undocking, after it separated from the ISS Harmony module just one day prior.