How small is the smallest habitable exoplanet?

Where can we expect to find life beyond Earth? A new study has redefined the lower limit in mass for habitable exoworlds. It suggests that low-mass waterworlds might exist and might be a place to look. 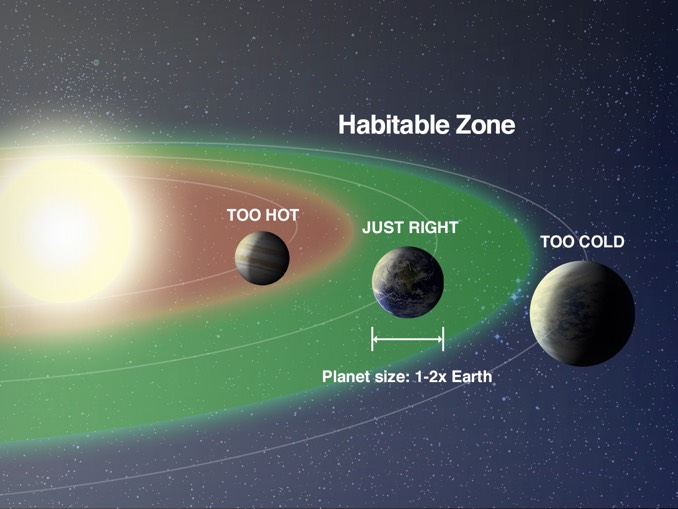 The habitable zone as traditionally understood. New findings suggest that rocky planets smaller than Earth might still have liquid water, even if they’re somewhat outside a star’s primary habitable zone. Image via NASA/Astronomy Now.

What makes a planet potentially habitable? Life as we know it requires liquid water, among other factors. And it makes sense that larger rocky planets, like Earth, can maintain their liquid water – and their atmospheres – more easily than very small planets, whose gravity is weaker. But now, scientists from Harvard University have found that even very small rocky exoplanets, orbiting other stars, might still hold onto their water, boosting their chances for habitability. This finding expands on the traditional view of a star’s habitable zone, the zone around a star where temperatures are just right, allowing liquid water to exist.

The new peer-reviewed results were first published in The Astrophysical Journal on August 13, 2019.

If you don’t mind a bit of jargon, consider it this way. This new research redefines the lower limit in mass for potentially habitable exoplanets. Mass is simply the amount of matter a body contains. This new definition extends what we can think of as a habitable zone for small, low-mass and (because gravity depends on mass) low-gravity exoplanets.

How small is too small? The critical boundary point seems to be about 2.7 percent of the mass of Earth. Any planets less massive than that would lose their atmospheres to space before liquid water could form on their surfaces, and any water that might be present would vaporize or freeze. For comparison, the moon is 1.2 percent of Earth’s mass and Mercury is 5.53 percent.

As astronomer Constantin Arnscheidt, lead author of the paper, explained:

When people think about the inner and outer edges of the habitable zone, they tend to only think about it spatially, meaning how close the planet is to the star. But actually, there are many other variables to habitability, including [a planet’s] mass.

Setting a lower bound for habitability in terms of planet size gives us an important constraint in our ongoing hunt for habitable exoplanets and exomoons.

Robin Wordsworth, a co-author on the study, added:

Low-mass waterworlds are a fascinating possibility in the search for life, and this paper shows just how different their behavior is likely to be compared to that of Earth-like planets. Once observations for this class of objects become possible, it’s going to be exciting to try to test these predictions directly. 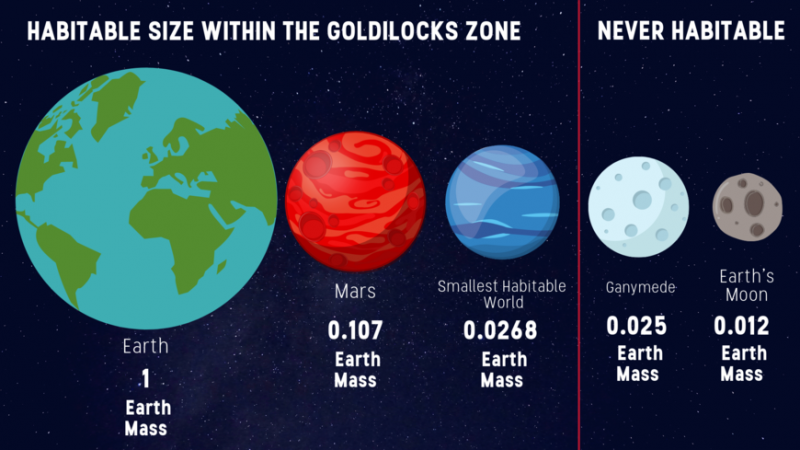 Graphic depicting the new lower size limit for smaller rocky exoplanets. Very small planets – at least larger than only 2.7% of the mass of Earth – could maintain liquid water (depending on other factors), according to this new work, while planets smaller than that limit would have their water escape to space or freeze. Image via Harvard SEAS/Astrobiology Magazine.

According to traditional thinking about habitable zones, if a planet is too close to its star, a runaway greenhouse effect might occur, resulting in the planet losing all its water. This might happen even at the inner edge of a star’s habitable zone. Venus is often mentioned as an example of this process in our own solar system; it might once have had an ocean, but a runaway greenhouse effect occurred, leaving Venus dry as a bone and hot enough on its surface to melt lead.

According to its authors, the new study:

… sheds light on the important process of atmospheric evolution on small planets.

In other words, their work suggests that – for small exoplanets that are not too small – something interesting occurs as one of these planets, even if it is on the edge of its star’s habitable zone, begins to warm due to the greenhouse effect. In conditions of a warming atmosphere, on a low-mass world with relatively weak gravity the exoplanet’s atmosphere expands outward, becoming larger and larger relative to the size of the planet. This has the effect of increasing both the absorption and radiation of heat from the star, allowing the planet to achieve a kind of balance, maintaining a stable temperature. In this way, the atmospheric expansion might prevent small, low-gravity planets from experiencing a runaway greenhouse effect. Instead, they might be able to maintain their surface liquid water, even on the inner edge of the habitable zone, in relatively close proximity to their stars.

It’s also interesting to note that these findings, according to the researchers, appear to apply to both G-type sun-like stars as well as M-type red dwarf stars.

Smaller, cooler red dwarfs are the most common stars in our galaxy, so that in itself would increase the chances of finding more habitable worlds. 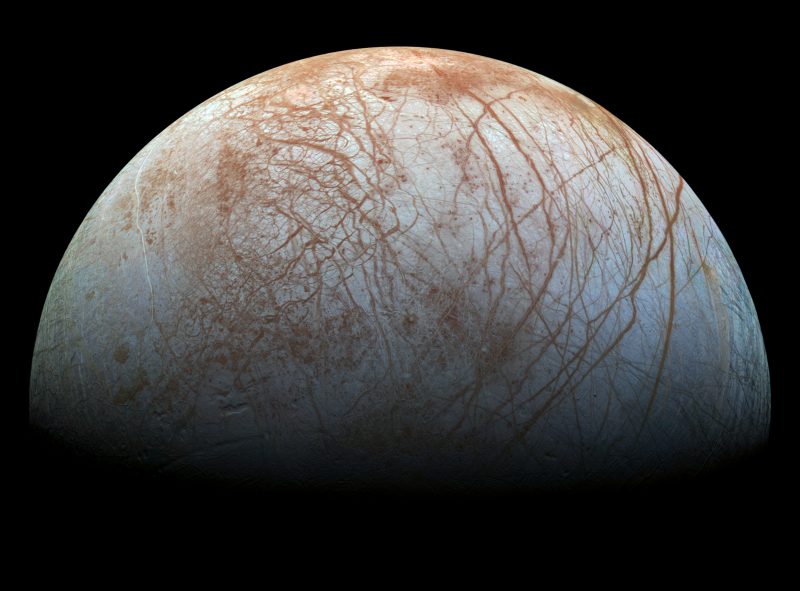 Jupiter’s icy ocean moon Europa as seen by Galileo in the late 1990s. The researchers wondered if these kinds of small icy moons could be habitable on the surface if they were closer to the sun, but the new study suggests they would be too small. Image via NASA/JPL-Caltech/SETI Institute/Europa Clipper.

The researchers also used their findings to figure out a question regarding certain moons in our solar system. Scientists had wondered if Jupiter’s icy moons Europa, Ganymede and Callisto could become habitable on the surface if they were closer to the sun, especially since they all have subsurface oceans beneath their ice crusts. The answer, though, seems to be no, as they are too small.

Although there is still a limit as to how small a planet can be and still be habitable, this new study shows that there could still be many more such worlds – smaller than Earth, but habitable, with liquid water – than previously thought. This bodes well in the search for life beyond our solar system. 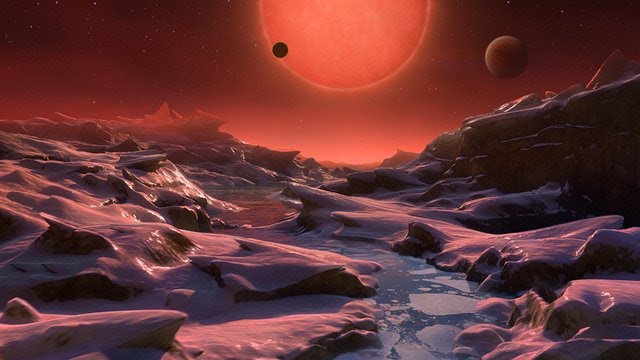 Artist’s concept of one of the rocky worlds orbiting the TRAPPIST-1 red dwarf star, with possible liquid water on the surface. A new study says that smaller rocky planets could have a better chance of holding on to their water than previously thought. Image via ESO/M. Kornmesser.

Bottom line: A new study has found that small exoplanets have a better chance of holding on to their water than previously thought, increasing the chances that some of them could be habitable.