Newly-discovered Asteroid 2018 UA made an extremely close approach to Earth on Friday morning. Luckily, the space rock was too small to be dangerous. 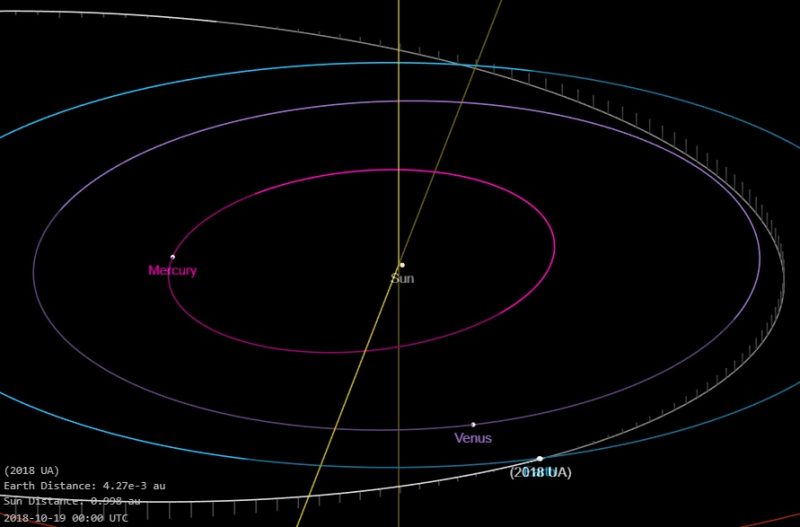 The orbit of Apollo-type asteroid 2018 UA is seen here almost intercepting Earth as we orbit the Sun. Image via NASA/JPL.

A small space rock made an extremely close approach yesterday (October 19, 2018). The close flyby of Asteroid 2018 UA occurred just hours after being detected by the Catalina Sky Survey in Arizona.

Limited observations did not allow for precise trajectory calculations, but estimates suggest the small asteroid passed at a distance between 4,536 miles to 9,540 miles (7,300 km to 15,353 km) from Earth’s surface. For comparison, meteorological and television satellites orbit at some 22,300 miles (35,888 km) from our planet’s surface, which means the asteroid’s approach was one of the closest registered.

Was Earth at danger? No. Fortunately, it was just a 10-20 foot (3-6 meter) space rock, which means that most of the asteroid would disintegrate if it entered our atmosphere. If a space rock of that size did enter our atmosphere, it would be visible as an impressive meteor, probably even in daylight.

Small asteroids are very difficult to detect, but detections are improving. In fact, last month, a dozen space rocks were discovered passing between Earth and our moon, which suggest that many near misses must have gone undetected in the past.

Bottom line: A small asteroid made an extremely close approach to Earth on the morning of October 19, 2018.