Send your name to Mars

Want to send your name to Mars on NASA’s next rover mission in 2020? You’ll get your name etched on a microchip affixed to the rover – and a souvenir boarding pass. Here’s how. 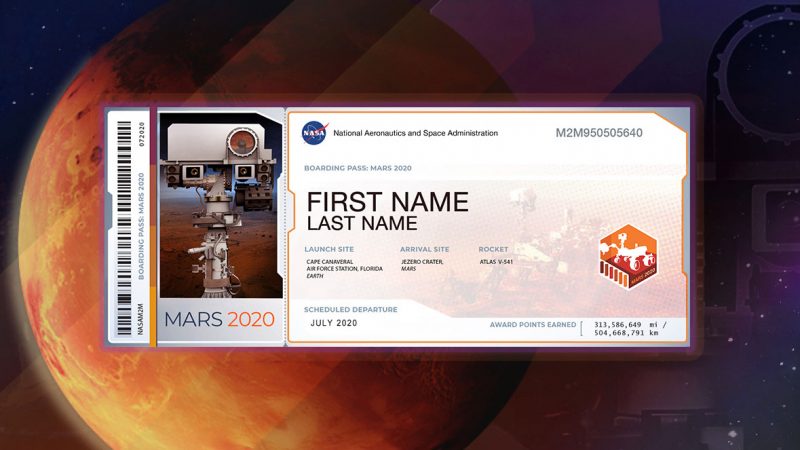 Members of the public who want to send their name to Mars on NASA’s Mars 2020 rover mission can get a souvenir boarding pass and their names stenciled on chips to be affixed to the rover. Sign up here. Image via NASA/JPL-Caltech.

NASA is giving the public an opportunity to send their names – stenciled on chips – with the Mars 2020 rover mission. The rover is scheduled to launch as early as July 2020, with the spacecraft expected to touch down on Mars in February 2021.

NASA will use an electron beam to stencil the submitted names onto a silicon chip with lines of text smaller than one-thousandth the width of a human hair (75 nanometers). At that size, more than a million names can be written on a single dime-sized microchip. The chip (or chips) will ride on the rover under a glass cover.

From now until September 30, you can add your name to the list (and obtain a souvenir boarding pass to Mars) here.

NASA said that the robotic rover will search for signs of past microbial life, characterize the planet’s climate and geology, collect samples for future return to Earth, and pave the way for human exploration of Mars.

Bottom line: How to sign up to send your name to Mars with NASA’s 2020 rover mission.