Astronomers see many breathtaking merging galaxies, with their giant tidal streams of stars and unusual shapes. But some normal-looking galaxies might be merging, too. Now astronomers have a new tool to find out.

When you think about it – given the vastness of space in contrast to the minuteness of all matter – it’s surprising that galaxies collide and merge at all. Yet they do. Astronomers have known for some time, for example, that our Milky Way galaxy will ultimately merge with the large neighboring Andromeda galaxy, some 4 to 8 billion years from now. And just last week we learned that the Large Magellanic Cloud will is on a collision course with our Milky Way, too. This little galaxy will merge with ours in only 2 billion years, possibly knocking our own solar system out of the Milky Way entirely. In distant space, too, astronomers see and study merging galaxies. On January 9, 2019, at the 233rd AAS meeting in Seattle, Washington, astronomers from the Sloan Digital Sky Survey (SDSS) said they have a new tool to find galaxy mergers that would otherwise be “missing.”

They’re searching for these galaxy mergers in data from a survey called MaNGA (Mapping Nearby Galaxies at Apache Point Observatory), which is part of SDSS. The astronomers said in a statement:

These results show that by going beyond simple searches for merging galaxies based just on how they look, astronomers will now be able find more galaxy mergers than ever before.

Galaxies may take billions of years to fully merge into a single galaxy. As astronomers look outward in space, they can see only “snapshots” of this long merger process. Located 300 million light-years away in the constellation Coma Berenices, these 2 colliding galaxies have been nicknamed The Mice because of the long tails of stars and gas emanating from each galaxy. Otherwise known as NGC 4676, the pair will eventually merge into a single giant galaxy. Image via Wikimedia Commons.

Rebecca Nevin of the University of Colorado is lead author of the new galaxy study, which formed the basis of her Ph.D. thesis at Colorado with astronomer Julie Comerford acting as advisor. Nevin commented:

Merging galaxies are key to understanding galaxy evolution, but finding them can be tricky.

The astronomers said the beautiful visible features of merging galaxies – the giant tidal streams of stars and unusual shapes – are visible in only a small fraction of those observed. They said some galaxies that don’t appear to be merging may actually be merging, after all. Their statement explained:

Astronomers have developed a way to find these hidden mergers. They created a method that uses simulations of merging galaxies to predict both how the mergers would look and how the stars in the galaxies would move.

By comparing their results with observations of galaxies from the SDSS’s Mapping Nearby Galaxies at Apache Point Observatory (MaNGA) survey, astronomers will be able to do much better at identifying merging galaxies in the wild.

Laura Blecha of the University of Florida – another team member – said:

These simulations allow us to predict the more subtle signs of merging galaxies, so we can find mergers in SDSS data that were previously hidden. 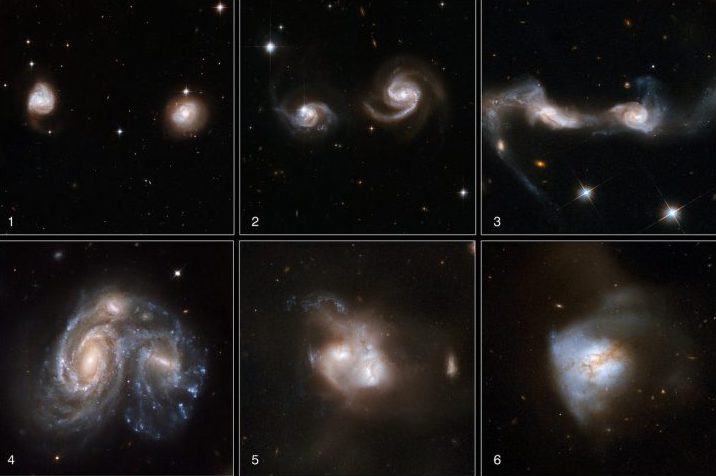 This montage of images from the Hubble Space Telescope shows 6 pairs of galaxies in different stages of the merger process. For more about these galaxies, visit SpaceTelescope.org. Image via Hubble Heritage Team/NASA/ESA/A. Evans/SDSS.

The team’s method works, in part, by analyzing galaxy images:

They have essentially made a galactic photo album, including pictures of galaxies in all stages of merging. In the past, astronomers’ ‘photo albums’ of galaxy mergers were sparse, including only galaxies in the stage of merging where they looked like spectacular mergers.

Nowadays, it would be totally unthinkable to take only one or two selfies every year. We have modernized the galaxy merger photo album – now it’s like taking one galaxy merger selfie a day for years.

The astronomers plan to make these extensive photo albums publicly available to everyone. Astronomers will use them to study how galaxies change as they undergo mergers.

Read more about these astronomers’ work via SDSS 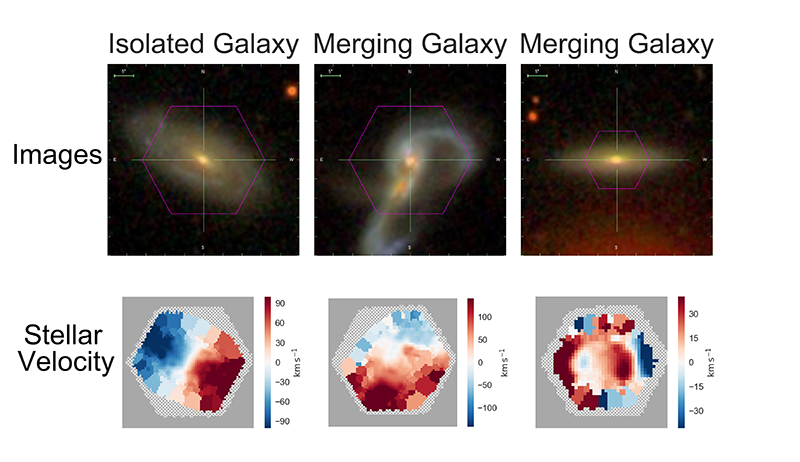 Three galaxies observed by the SDSS MaNGA survey. The top row shows the galaxies’ images, while the bottom row shows the velocity of the stars within the galaxies; red means the stars are moving away from us and blue means towards us. The panels on the left show an isolated spiral galaxy, not undergoing a merger. The middle panels show a spectacular pair of merging galaxies, obvious in both the image and the velocity map. The right panels show what appears in the image to be a single galaxy – but the velocity map reveals that it is actually a galaxy that has just merged. This is evident in the disturbed (counter-rotating) features in the velocity map. This example demonstrates the power of the team’s new method, which will identify merging galaxies using both imaging and kinematics. Image via Rebecca Nevin and the SDSS.