Scientists measure most distant galaxy yet

Galaxy EGS-zs8-1 sets a new distance record. It’s so far away the light we receive left the galaxy over 13 billion years ago, and it is just arriving now. 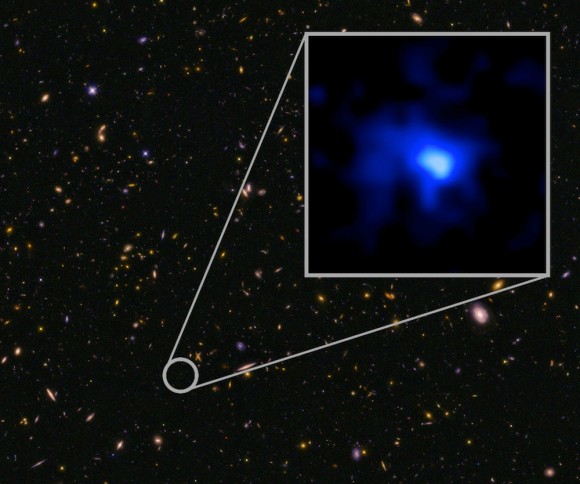 The farthest confirmed galaxy observed to date. It was identified in this Hubble image of a field of galaxies in the CANDELS survey (Cosmic Assembly Near-infrared Deep Extragalactic Legacy Survey). This is the most distant confirmed galaxy known, and it appears to also be one of the most massive sources at that time. The inset image of the galaxy is blue, suggesting very young stars. Image credit: NASA, ESA, P. Oesch and I. Momcheva (Yale University), and the 3D-HST and HUDF09/XDF teams

An international team of astronomers, led by Yale University and the University of California scientists, pushed back the cosmic frontier of galaxy exploration to a time when the universe was only five percent of its present age of 13.8 billion years.

The team discovered an exceptionally luminous galaxy – called EGS-zs8-1 – more than 13 billion years in the past and determined its exact distance from Earth using the combined data from NASA’s Hubble and Spitzer space telescopes, and the Keck I 10-meter telescope at the W. M. Keck Observatory in Hawaii. These observations confirmed it to be the most distant galaxy currently measured, setting a new record. The galaxy existed so long ago, it appears to be only about 100 million years old. The findings were published in Astrophysical Journal Letters today (May 5, 2015).

Galaxy EGS-zs8-1 is one of the brightest and most massive objects in the early universe and was originally identified based on its particular colors in images from NASA’s Hubble and Spitzer Space Telescopes.

Pascal Oesch of Yale University is the lead author of the study. He said:

While we saw the galaxy as it was 13 billion years ago, it had already built more than 15 percent of the mass of our own Milky Way today. But it had only 670 million years to do so. The universe was still very young then.

The new distance measurement also enabled the astronomers to determine that EGS-zs8-1 was still forming stars very rapidly, about 80 times faster than our galaxy today.

Only a handful of galaxies currently have accurate distances measured in this epoch of the universe and none younger than this.

Pieter van Dokkum of Yale University is second author of the study. He said:

Every confirmation adds another piece to the puzzle of how the first generations of galaxies formed in the early universe. Only the largest telescopes are powerful enough to reach to these large distances.

The discovery was only possible thanks to the relatively new MOSFIRE instrument on the Keck I telescope, which allows astronomers to efficiently study several galaxies at the same time.

The observations see EGS-zs8-1 at a time when the universe was undergoing very important changes: the hydrogen between galaxies was transitioning from a neutral to an ionized state.

Rychard Bouwens of the Leiden Observatory is a co-author of the study. He said:

It appears that the young stars in the early galaxies like EGS-zs8-1 were the main drivers for this transition called reionization.

These new Keck Observatory, Hubble, and Spitzer observations together also pose new questions. They confirm that massive galaxies already existed early in the history of the universe, but that their physical properties were very different from galaxies seen around us today. Astronomers now have very strong evidence that the peculiar colors of early galaxies seen in the Spitzer Space Telescope images originate from a very rapid formation of massive, young stars, which interacted with the primordial gas in these galaxies.

How do astronomers measure the huge distances in the universe? Billion-mile-long tape measures can’t be found at the hardware store. Instead, astronomers use the expansion of the universe itself to establish milepost markers. The light from remote objects is attenuated and weakened as space stretches like a rubber band. The consequences are that starlight will look redder relative to a nearby star of the same temperature. When starlight is spread into its component color via spectroscopy, features in the light will be shifted to the red end of the spectrum. This “redshift” can be used to reliably calibrate distances. The challenge is the farthest objects in the universe are typically too faint for spectroscopy to work. So instead, astronomers deduce a galaxy’s distance by precisely measuring its colors in visible and infrared light. This technique has found candidates for the farthest object in the universe. Hubble found galaxy EGS-zs8-1in deep-sky surveys, and Keck’s 10-meter-diameter segmented mirror is powerful enough to collect a spectrum from the unusually bright galaxy.

Bottom line: An international team of astronomers discovered an exceptionally luminous galaxy – called EGS-zs8-1 – more than 13 billion years in the past and determined its exact distance from Earth using the combined data from NASA’s Hubble and Spitzer space telescopes, and the Keck I 10-meter telescope at the W. M. Keck Observatory in Hawaii. These observations confirmed it to be the most distant galaxy currently measured, setting a new record.