A measurement of all the starlight ever produced

Posted by Eleanor Imster and Deborah Byrd in Space | December 5, 2018

How much starlight has our universe produced? According to a new study, stars have radiated 4×1084 photons since the start of the universe 13.7 billion years ago. That’s the number 4 with 84 zeros behind it.

An international team of scientists says it has measured all of the starlight ever produced throughout the 13.7-billion-year history of the observable universe. Sounds wild, right? But the new study was published November 30, 2018 in the peer-reviewed journal Science. According to the new measurement, the number of photons (particles of visible light) that have escaped into space since the universe began – after being emitted by stars – translates to 4×1084.

Or put another way …

Clemson College of Science astrophysicist Marco Ajello – who is featured in the video above – is lead author of the new paper. He said in a statement:

… we were able to measure the entire amount of starlight ever emitted. This has never been done before.

And, of course, there are many variables, so this number is just a ballpark figure. Still, it’s impressive. How did scientists arrive at this number? 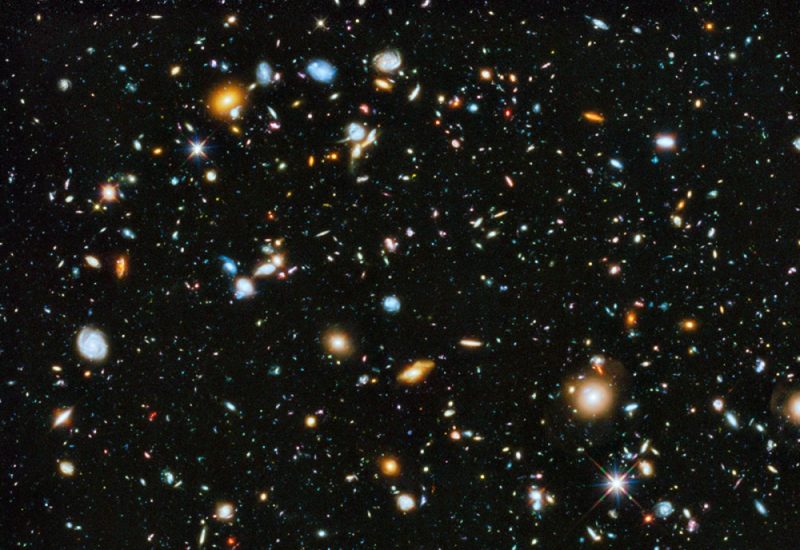 This is part of the Hubble Ultra Deep Field. It shows some of the oldest starlight ever seen in our universe. Image via NASA/ ESA.

Astrophysicists believe that our universe started in a Big Bang, some 13.7 billion years ago. They think it started forming stars very quickly after its birth, when it was only a few hundred million years old. Since then, the universe has become a star-making tour de force.

In the universe today, there are about two trillion galaxies and about a trillion-trillion stars.

Measuring all of the starlight in this vast universe is clearly a daunting task. This team of scientists says it did it by analyzing data from NASA’s Fermi Gamma-ray Space Telescope.

The new calculations are based on measurements of the extragalactic background light, also known as the EBL. You can think of the EBL as a cosmic fog composed of all the ultraviolet, visible and infrared light ever emitted by stars. If you could measure the EBL, you’d have taken a huge step toward measuring all the starlight in the universe.

But obtaining this measurement hasn’t been easy.

Abhishek Desai is a physics and astronomy grad student at Clemson, and a co-author on the new paper. Desai said:

Scientists have tried to measure the EBL for a long time. However, very bright foregrounds like the zodiacal light (which is light scattered by dust in the solar system) rendered this measurement very challenging.

The new study used Fermi Gamma-ray Space Telescope data to analyze the light from 739 blazars – supermassive black holes that emit powerful jets of gamma rays – whose light was emitted in the ancient universe and has taken billions of years to arrive at Earth. The scientists said:

Blazars are galaxies containing supermassive black holes that are able to release narrowly collimated jets of energetic particles that leap out of their galaxies and streak across the cosmos at nearly the speed of light. When one of these jets happens to be pointed directly at Earth, it is detectable even when originating from extremely far away. Gamma ray photons produced within the jets eventually collide with the cosmic fog [or EBL], leaving an observable imprint.

And thus the researchers were able to measure the density of the EBL not just at a given place, but also at a given time in the history of the universe.

Read more: How these scientists conducted their study.

Or check out the video below, which also describes more about how this study was conducted:

The upshot is that, until a future team of scientists corrects this number (a high probability since, as we all know, science is a process, not a body of facts), we now have a number to describe the total photons of light emitted by stars since the universe began.

Despite this stupendously large number, the researchers said, it’s interesting to note that – with the exception of the light that comes from our own sun and galaxy – the rest of the starlight that reaches Earth is exceedingly dim. It’s equivalent to a 60-watt light bulb viewed in complete darkness from about 2.5 miles (4 km) away.

Why is this? It’s because our universe is almost incomprehensibly huge. The dimness of starlight also explains why the sky is dark at night, other than light from the moon, visible stars and the faint glow of the Milky Way. 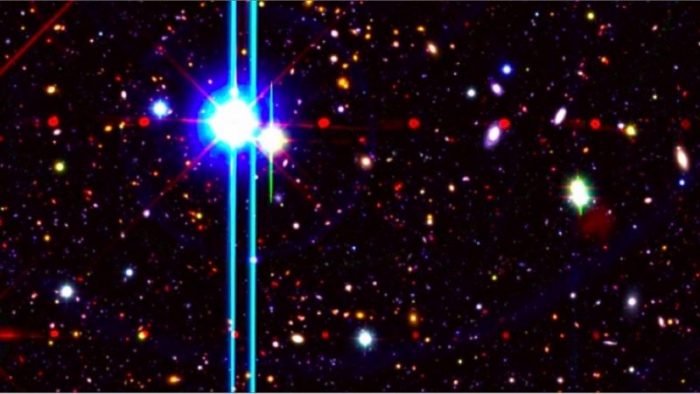 An image of ancient starlight from what was called the Ultra-Deep Survey, via University of Nottingham.

Bottom line: How much starlight has our universe produced? According to a new study, stars have radiated 4×1084 photons since the start of the universe 13.7 billion years ago. That’s the number 4 with 84 zeros behind it.

Source: A gamma-ray determination of the Universe’s star-formation history