Mars is a desert world, with sand dunes similar to those on Earth. But the processes that create them can be quite different from those on our planet, according to a new study from the University of Arizona. 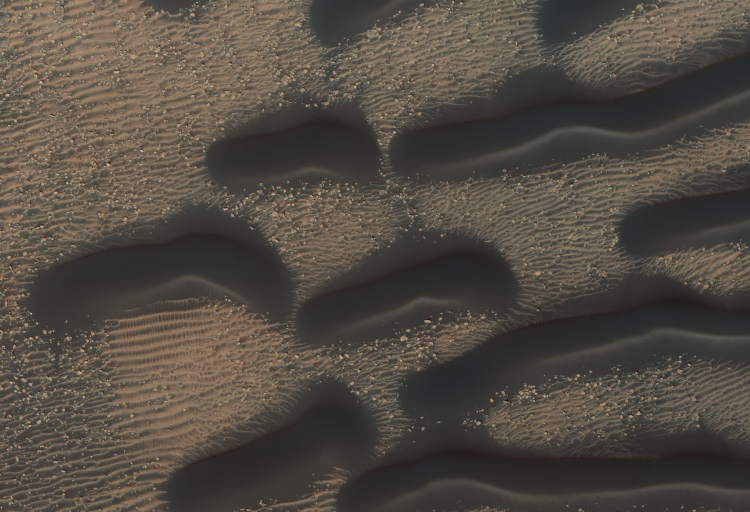 Linear sand dunes in Proctor Crater as seen by the Mars Reconnaissance Orbiter (MRO) on June 10, 2007. Image via NASA/JPL/University of Arizona.

Like Earth, Mars has sand dunes, a lot of them, but scientists are now learning that the processes involved in their formation and movement can be quite different from what happens on our own planet. A team of planetary scientists from the University of Arizona (UA) has conducted the most detailed study yet of how sands move around on Mars, and how that movement differs from sand movement in deserts on Earth.

The new research was led by Matthew Chojnacki at the Lunar and Planetary Laboratory (LPL) at UA and the peer-reviewed results were published in the current issue of the journal Geology on March 11, 2019.

The team found that processes not involved in sand movement on Earth are very much involved in how sand gets transported on Mars, most notably large-scale features on the landscape and differences in landform surface temperature. As Chojnacki explained:

Because there are large sand dunes found in distinct regions of Mars, those are good places to look for changes … If you don’t have sand moving around, that means the surface is just sitting there, getting bombarded by ultraviolet and gamma radiation that would destroy complex molecules and any ancient Martian biosignatures.

Another stunning set of rolling sand dunes, big and small, in Proctor Crater on Mars, as seen by MRO on February 9, 2009. Image via NASA/JPL/University of Arizona.

It may seem surprising that Mars even has sand dunes, since its atmosphere is so thin – about 0.6 percent of Earth’s air pressure at sea level – but it does, and they can range from just a few feet tall to hundreds of feet in height. They have been seen from spacecraft in orbit and close-up on the ground by rovers. The sand dunes on Mars do move much more slowly, however, about two feet per Earth year (about one Martian year), while sand dunes on Earth can migrate as much as 100 feet per year. According to Chojnacki:

On Mars, there simply is not enough wind energy to move a substantial amount of material around on the surface. It might take two years on Mars to see the same movement you’d typically see in a season on Earth.

There were other questions the researchers wanted to address, such as whether the Martian sand dunes are still active today, or just relics from millions or billions of years ago when the atmosphere was thicker. As Chojnacki stated:

We wanted to know: Is the movement of sand uniform across the planet, or is it enhanced in some regions over others? We measured the rate and volume at which dunes are moving on Mars. 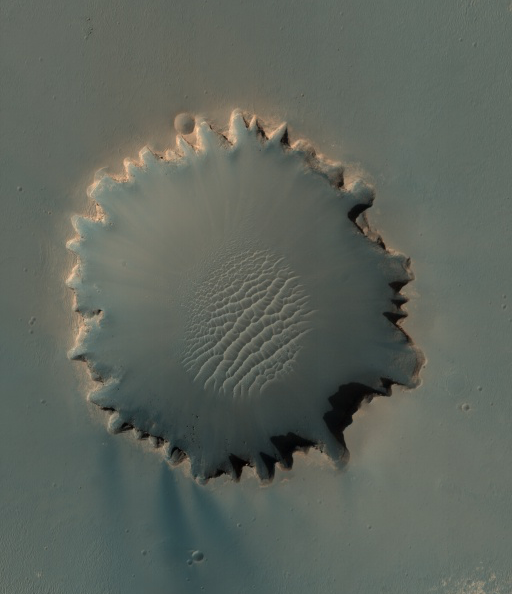 Sand dunes inside Victoria Crater, near the Opportunity rover landing site as seen by MRO on October 3, 2006. Image via NASA/JPL/University of Arizona. 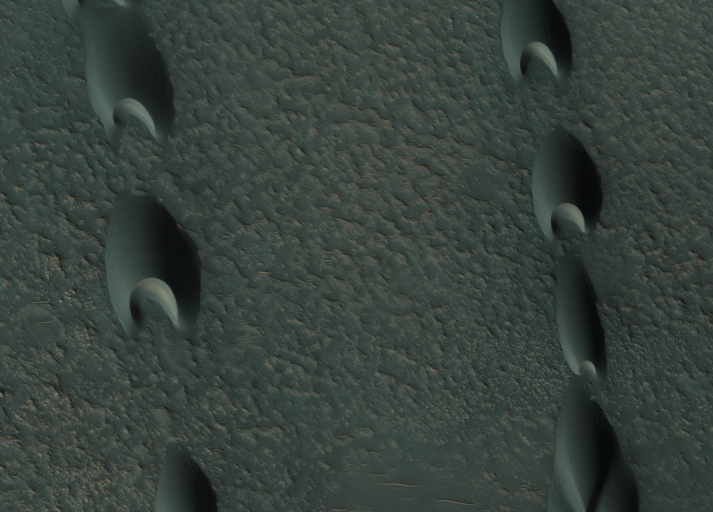 Barchan sand dunes in the Hellespontus region, as seen by MRO on March 16, 2008. Image via NASA/JPL/University of Arizona.

Spotted sand dunes near the Martian north pole, as seen by MRO on April 13, 2008. The spots are where carbon dioxide ice has sublimated off the dunes. Image via NASA/JPL/University of Arizona.

Frosted sand dunes near the Martian north pole, as seen by MRO on February 19, 2008. Image via NASA/JPL/University of Arizona.

In order to help figure out the causes of sand movement on Mars, the researchers used high-resolution images taken by the High Resolution Imaging Science Experiment (HiRISE) camera on NASA’s Mars Reconnaissance Orbiter (MRO). MRO has been orbiting Mars since 2006, taking thousands of detailed images of the surface all over the planet. For this particular work, the researchers mapped sand volumes, dune migration rates and heights for 54 dune fields, encompassing 495 individual dunes. Chojnacki said:

This work could not have been done without HiRISE. The data did not come just from the images, but was derived through our photogrammetry lab that I co-manage with Sarah Sutton. We have a small army of undergraduate students who work part time and build these digital terrain models that provide fine-scale topography.

What the researchers found was surprising. While there are some ancient, inactive sand dunes, there are also many still active today. They fill and sweep across craters, canyons, rifts, cracks, volcanic remnants, polar basins and plains surrounding craters. Mars’ atmosphere may be thin, but it is still good at transporting sand grains across a diverse array of landscapes.

There are three regions that have the most activity: Syrtis Major Planum, a dark area larger than Arizona; Hellespontus Montes, a mountain range about two-thirds the length of the Cascades; and Olympia Undae (North Polar Erg), a sea of sand surrounding the north polar ice cap. What makes these areas unique is that they experience conditions not known to affect terrestrial sand dunes: stark transitions in topography and surface temperatures. According to Chojnacki:

Those are not factors you would find in terrestrial geology. On Earth, the factors at work are different from Mars. For example, ground water near the surface or plants growing in the area retard dune sand movement. 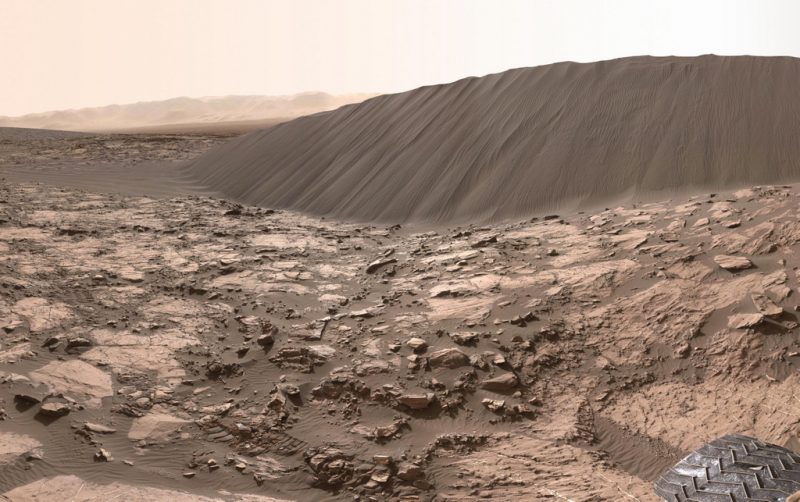 Close-up view of a sand dune called Namib Dune, part of the Bagnold Dunes near Mount Sharp in Gale Crater, as seen by the Curiosity rover on December 18, 2015. Namib is about 16 feet (5 meters) tall. Image via NASA/JPL-Caltech/MSSS. 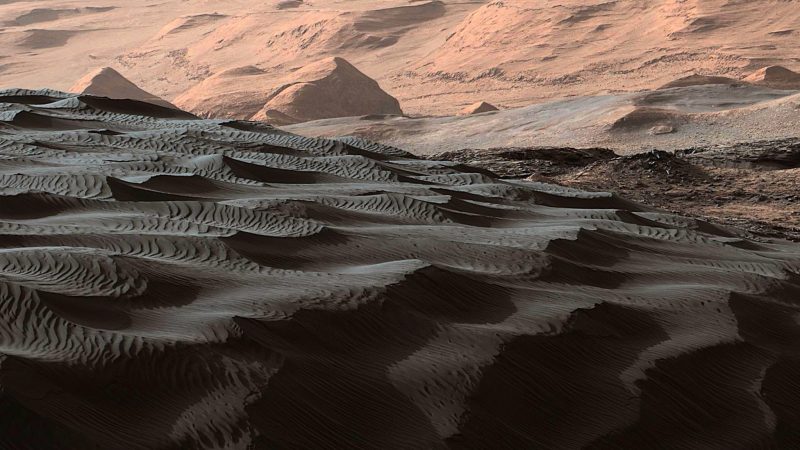 Another view from Curiosity of part of the Bagnold Dunes near Mount Sharp in Gale Crater. Image via NASA/JPL-Caltech/MSSS.

The researchers also found that small basins filled with bright dust had higher rates of sand movement as well, as Chojnacki noted:

A bright basin reflects the sunlight and heats up the air above much more quickly than the surrounding areas, where the ground is dark, so the air will move up the basin toward the basin rim, driving the wind, and with it, the sand.

NASA’s Curiosity rover has studied a field of dunes in Gale Crater up close, called the Bagnold Dunes, and the Mars Odyssey orbiter also recently saw an unusual hexagonal-shaped dune field created by the Martian winds.

Mars is often referred to as a desert world, for good reason. Sand dunes flow across the surface just as they do in deserts on Earth, like the Sahara. In some locations, you could swear you were in the American Southwest, with the scenery being uncannily similar-looking. But Mars is not Earth, and different geological and other environmental factors play a key role in how sand dunes behave, and differ, on both worlds.

Bottom line: This new study shows how sand dunes on Mars – while visually and aesthetically similar to their earthly counterparts – can differ significantly in how they are formed and how they migrate across the surface of this cold desert world.

Source: Boundary condition controls on the high-sand-flux regions of Mars