Mars has sand dunes, as Earth does. But now, NASA’s Odyssey orbiter has revealed something odd: a large dune field shaped roughly like a hexagon. The finding is expected to provide more clues as to how dunes form in Martian winds. 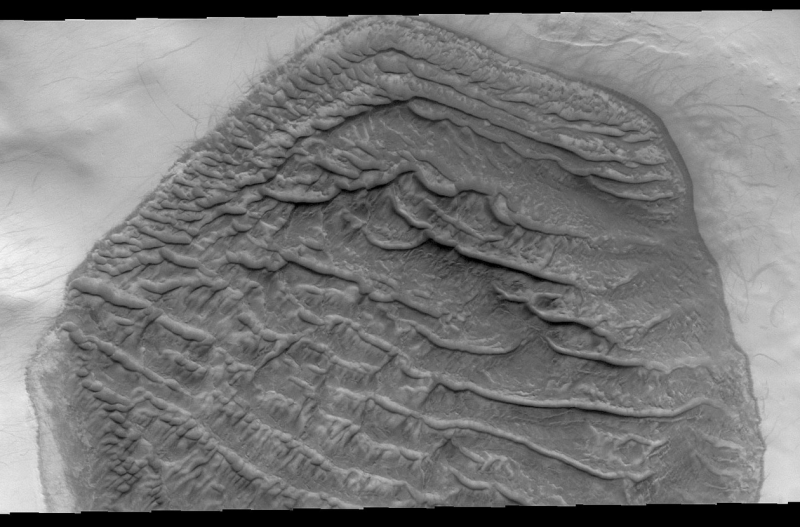 Unusual dune field on a crater floor in Terra Cimmeria, part of the heavily cratered southern highland region of the planet Mars. The interesting patterns of the dunes themselves are contained within a boundary that is roughly hexagon-shaped. Image via NASA/JPL-Caltech/Arizona State University.

Mars can be a weird place sometimes. Although there are many of the same atmospheric and geological processes as on Earth, they can take on unusual forms not seen on our planet. The Mars rovers have discovered, for one example, very thin and delicate rock formations that are common in Mars’ lower gravity and thinner atmosphere (although similar ones can be found on Earth as well). Mars is also covered in sand dunes, much like those in earthly deserts. NASA’s Mars Odyssey orbiter recently took photos of a dune field that – unlike any dune field seen on Earth – has a strange-looking, roughly hexagonal shape. It’s not a perfect hexagon, but close enough to make you take notice.

The new photo was posted on the Flickr page of the Mars Space Flight Facility at Arizona State University (ASU) on February 14, 2019.

The dune field is on a crater floor in the Terra Cimmeria region, 68 degrees south of the equator, towards the south polar cap. This location on Mars, scientists believe, figures into the appearance of the dune field. As explained on ASU’s Flickr page:

Dunes at high latitudes – near the polar caps – are affected by seasonal frost and ice. The interactions with frost/ice reduces the amount of movement of sand grains within the dunes. This changes the morphology of near-polar dunes when compared to dunes at lower latitudes where ice/frost do not occur as frequently.

There are also many dust-devil tracks visible in the images. Dust devils are common on Mars, just as they are on Earth, despite Mars’ thinner atmosphere. They have even been photographed in-action by the Spirit, Opportunity and Curiosity rovers, as the dust devils raced across the Martian landscape.

Lori Fenton is a planetary aeolian geomorphologist at SETI Institute. She studies wind-formed features such as sand dunes. She commented on the hexagonal dune field on Twitter:

Southern high latitude dunes seriously get their freak on. Nobody has yet tried to understand them. They know they're too cool for us anyway. https://t.co/El4hNv88MI

As Fenton also noted, there is a second similar formation nearby, in another crater. Not quite as hexagonal, but still interesting.

Yep. @jmars_gis has got your back, here's a view. If you look at the whole dune field, it's not entirely hexagonal. I also included another crater nearby that also has an odd-shaped dune field. DTM is from MOLA, rainbow goes from elevations 300 to 2700 m. pic.twitter.com/vcDnu3kupW

As to how the dune fields formed the way they did, Fenton expressed some ideas via Twitter:

Yeah, the crater shape is one factor shaping the dune field, and it also affects incident winds (blocks them or enhances them). The dunes this far south are partially stabilized, which interferes with that interpretation (which is already complex).

There is also a close-up view of the dunes themselves, from the HiRISE camera on NASA’s Mars Reconnaissance Orbiter.

Dunes are common on Mars, just as they are in deserts on Earth, and come in various shapes and sizes. Smaller sand drifts are also common. Most of the landers and rovers on Mars have seen dunes and drifts up close, a chance to study them in detail as to their composition and how they can form – even up to about 20 feet (6 meters) tall, like ones in the Bagnold Dune Field seen by Curiosity – in such a thin atmosphere. 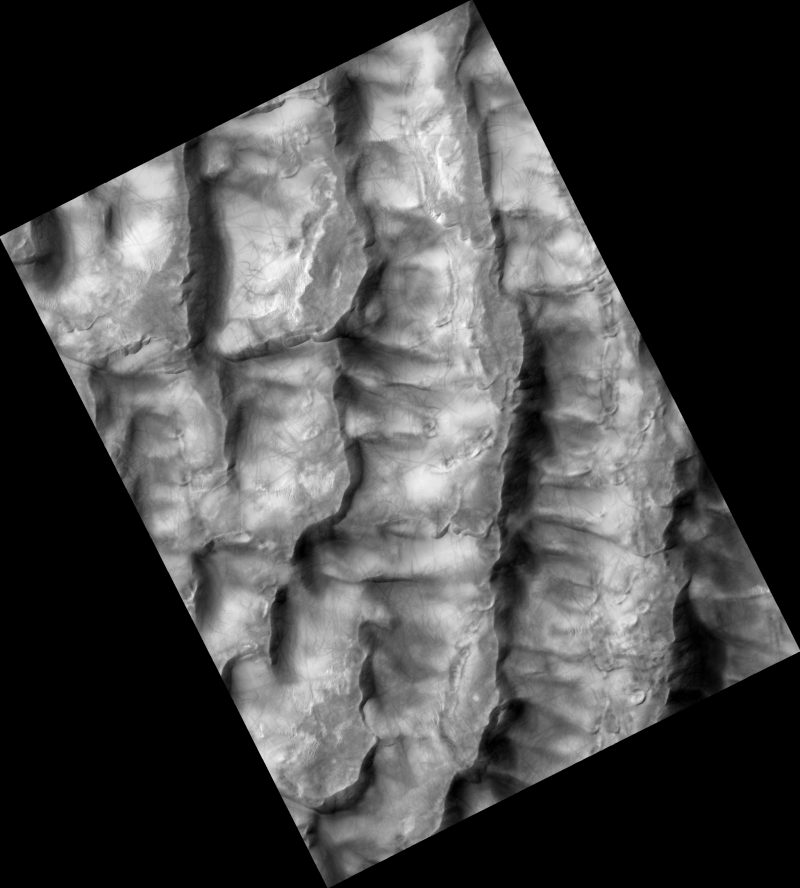 Close-up view of the dunes themselves, from the Mars Reconnaissance Orbiter. Image via NASA/JPL/University of Arizona.

What makes these new dunes seen by Odyssey so peculiar is the overall shape of the dune fields themselves. Scientists, including Fenton, will examine them closely to figure out the processes involved in their formation.

Fenton had also recently written about another dune field on her blog that has similar crisp edges, but a different shape. She proposed two ideas for how these types of southern latitude dune fields – slower and more eroded – form:

1. (Less interesting) Dunes and ripples are forming and moving at high southern latitudes, but because of the ground ice, they do so more slowly than dunes at lower latitudes. They’re born that way, baby. (On second thought, that’s still interesting, because it means high latitude dunes would then record wind patterns over a longer time period than low latitude dunes. But they’d be hard to interpret.)

2. (More exciting) Dunes and ripples in the high southern latitudes formed long ago, in a climate state where the ground ice wasn’t yet formed, and have since become mostly locked in place. We’re essentially looking at fossil dunes. That means their shape would record ancient wind patterns, which we could compare with modern winds to see how the climate state on Mars has changed. It means we could use dunes to study climate change on Mars. 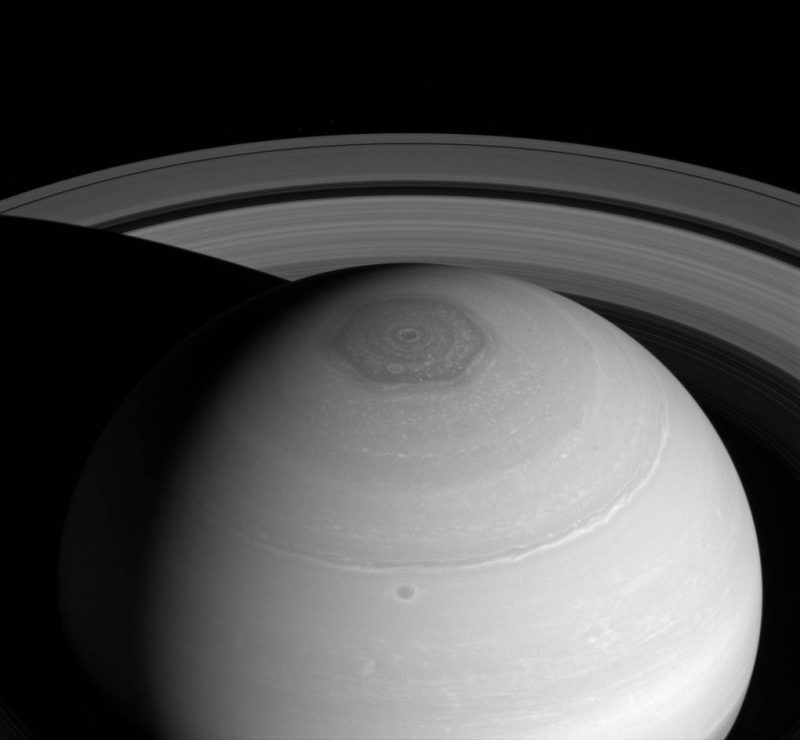 The huge, near-perfect hexagon at Saturn’s north pole, as seen by the Cassini spacecraft in 2014. Image via NASA.

And what about that hexagonal shape? Are we surprised? Yes and no. Hexagons can be found in other places in nature. Another striking example is the jet stream formation at Saturn’s north pole, which is a massive, near-perfect hexagon centered at the pole itself. It’s absolutely astonishing.

Read more about Lori Fenton’s work at her blog.

Bottom line: These odd dune fields seen by the Odyssey orbiter – with one having a roughly hexagonal shape – are an interesting puzzle for planetary scientists, and are expected to help provide more clues about wind-driven dune formation processes on Mars.