An image from the European Southern Observatory shows a classic example of a star-forming region in space, 6,500 light-years away.

Check out this glowing ruby-red image of the Lambda Centauri Nebula, also known as IC 2944, and sometimes called the Running Chicken Nebula. The European Southern Observatory (ESO) released this image today (September 21, 2011). It’s a cloud of hydrogen, illuminated by hot, bright newborn stars, in the direction of the southern constellation Centaurus the Centaur. The Wide Field Imager on the MPG/ESO 2.2-meter telescope at ESO’s La Silla Observatory in Chile acquired this image. 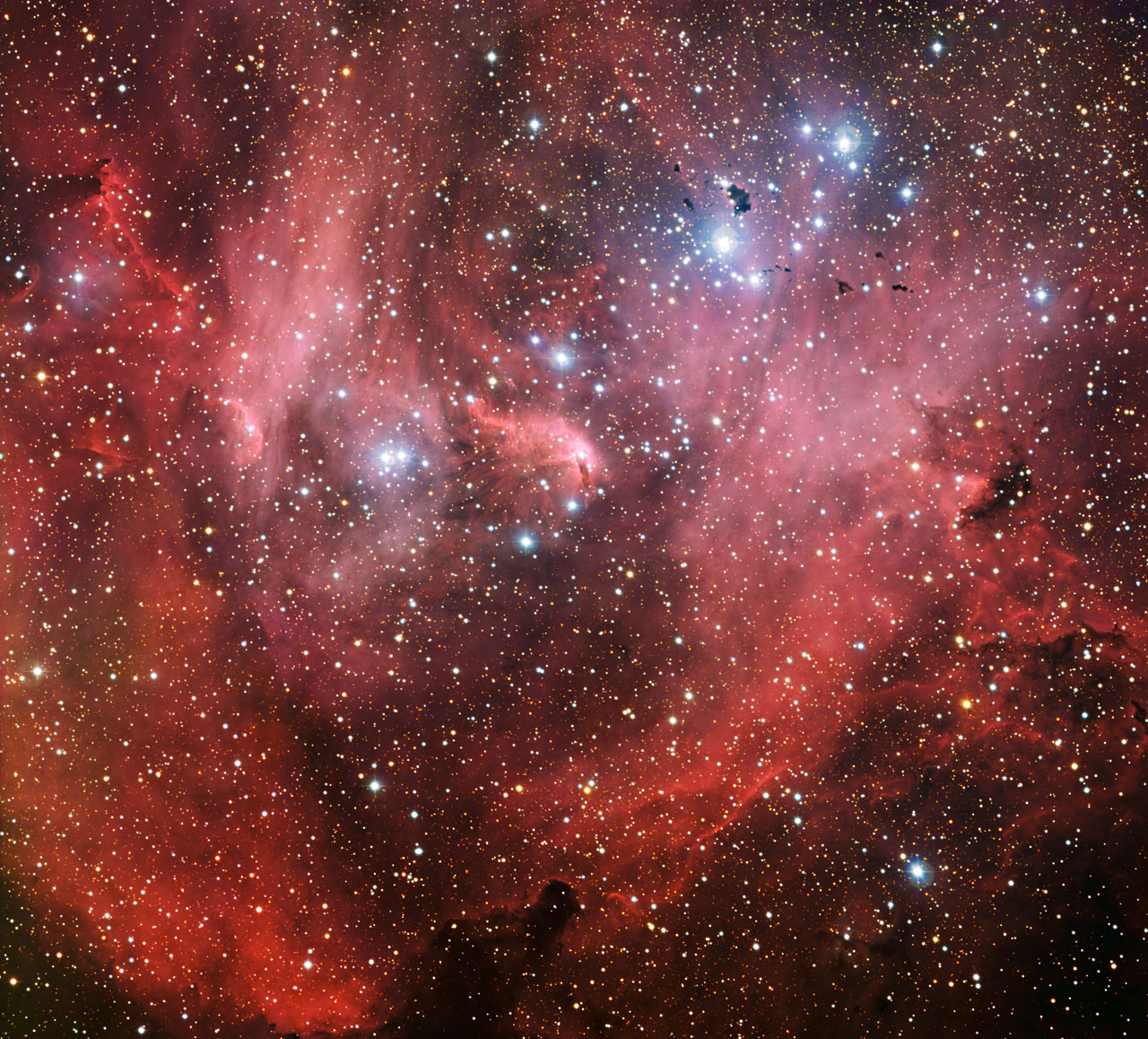 One possible chicken is running from left to right with the tip of its beak at the brightest star. Image Credit: ESO

Chicken or no, this nebula lies around 6,500 light-years from Earth. In it, hot newborn stars, recently formed from clouds of hydrogen gas, shine brightly with ultraviolet light. This intense radiation in turn excites the surrounding hydrogen cloud, making it glow a distinctive shade of red. This red shade is typical of star-forming regions.

Another sign of star formation in IC 2944 is the series of black clumps silhouetted against the red background in part of this image. These are examples of what astronomers call Bok globules. They are dense dust clouds, opaque to visible light. When astronomers peer at Bok globules using infrared telescopes, they find that stars are forming within many of them.

The most prominent collection of Bok globules in this image is known as Thackeray’s Globules, after the South African astronomer who first noted them in the 1950s. They’re visible among a group of bright stars in the upper right part of the image. 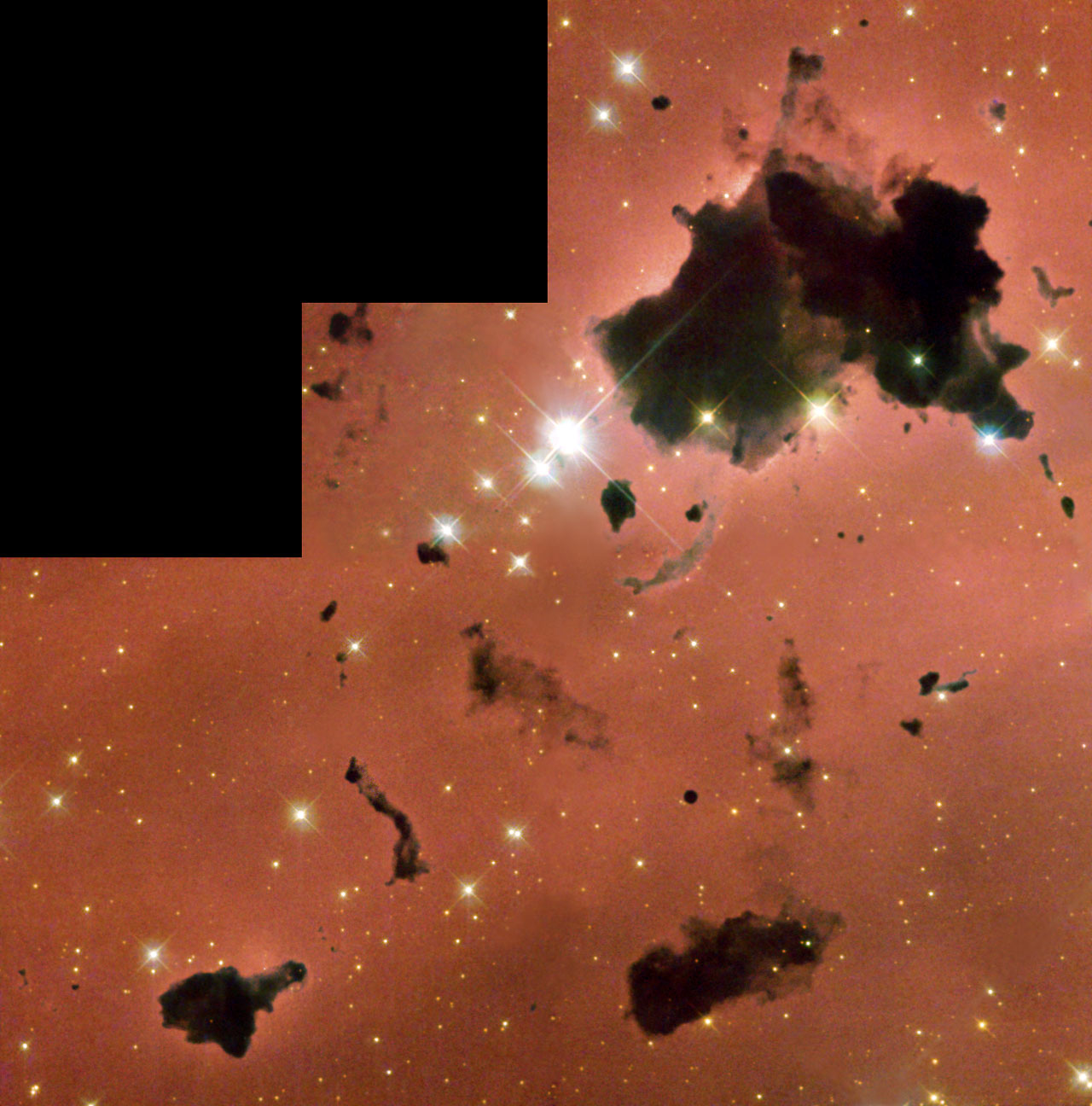 If the stars cocooned in Thackeray’s Globules are still gestating, then the stars of cluster IC 2944, embedded within the nebula, are their older siblings. Still young in stellar terms at just a few million years old, the stars in IC 2944 shine brightly, and their ultraviolet radiation provides much of the energy that lights up the nebula. These glowing nebulae are relatively short-lived in astronomical terms. They last millions of years, not billions of years as stars like our sun do. The short lifespans of these hot, bright stars mean the Lambda Centauri Nebula (IC 2944, Running Chicken) will eventually fade away as it loses both its gas and its supply of ultraviolet radiation. That will, of course, happen on a timescale almost incomprehensibly long to us humans.

Bottom line: An image from the Wide Field Imager on the MPG/ESO 2.2-meter telescope at ESO’s La Silla Observatory reveals the Lambda Centauri Nebula, a cloud of hydrogen and newborn stars in the direction of the southern constellation Centaurus the Centaur. The nebula is also called IC 2944, or the Running Chicken Nebula. It’s a classic example of a star-forming region in space.