Is the Random Transiter weirder than Tabby’s Star?

Move over, Tabby’s Star. The Random Transiter may now be the weirdest star in the galaxy. Kepler data revealed 28 transits in front of this star in 87 days. What caused them? Multiple planets? A disintegrating planet? Alien megastructures? 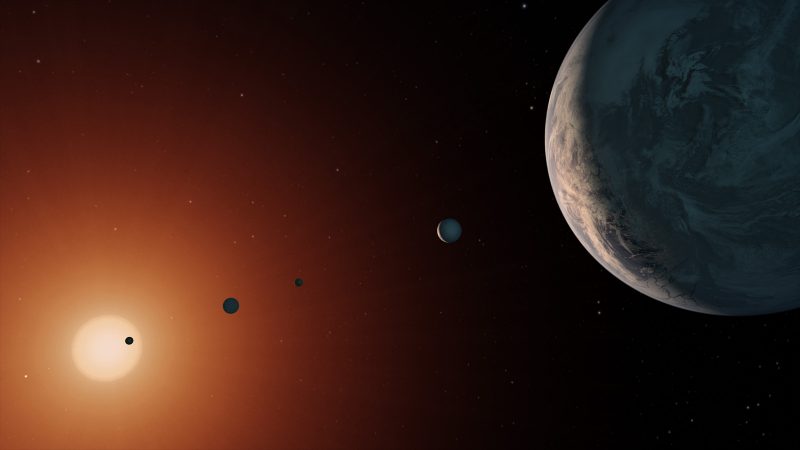 Artist’s concept showing 5 of the 7 Earth-sized exoplanets orbiting the star TRAPPIST-1. These planets were discovered via transits, that is, when they passed in front of their star as seen from Earth. Similarly, Kepler spacecraft data revealed 28 transits in the binary star system HD 139139, aka the Random Transiter. But – while the TRAPPIST-1 planets have periodic, stable orbits – the orbits of the objects in the HD 139139 system are exceedingly, well … random. Image via NASA/JPL-Caltech/Newsweek.

Do you remember Tabby’s Star observed by the Kepler Space Telescope? That star with the weird dips in brightness that still haven’t been fully explained yet? The theories have ranged from groups of comets to disintegrating planets to even alien megastructures, and it has been determined that dust is somehow involved. But now, there’s a new discovery – first described publicly by planet-hunting astronomer Hugh Osborn on June 29, 2019 – that might be even more baffling than Tabby’s Star. It’s being called the Random Transiter. In a nutshell, this star, also seen by Kepler, was found over a period of 87 days to undergo up to 28 transits, that is 28 objects passing in front of the star, looking just like planets. The problem is that there is no evidence of regular, periodic orbits for these 28 objects, as would be expected for planets. Hence the moniker Random Transiter. So what is going on?

The unusual findings were first noted by citizen astronomers looking at the Kepler data in spring 2018, and the first peer-reviewed paper was just published on June 28, 2019 on arXiv. 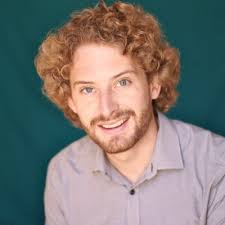 Astronomer Hugh Osborn. He was the first to publicly describe the Random Transiter, in his blog Lost in Transits. You can also find him via @exohugh on Twitter. 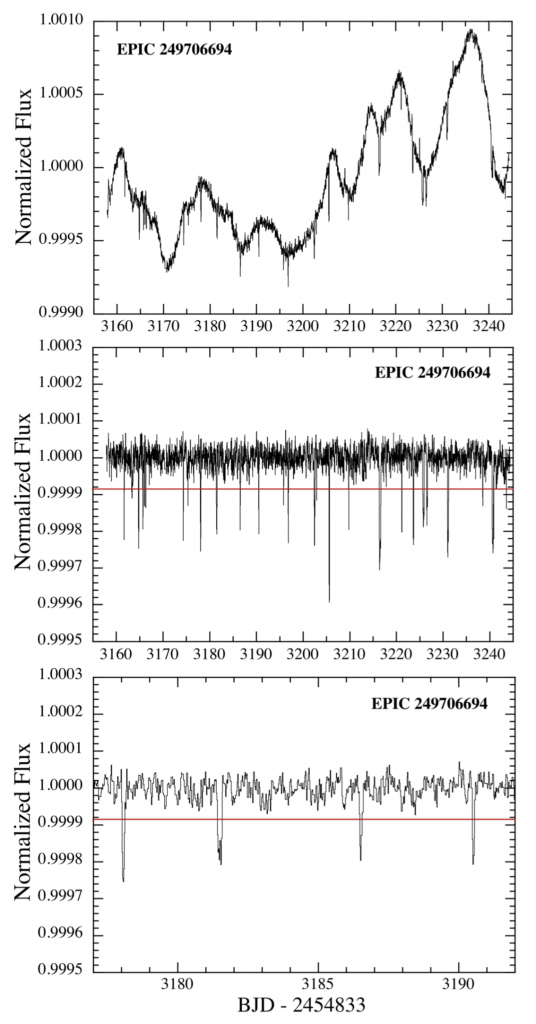 Kepler light curve of HD 139139, showing the weird transits. Top panel: the raw 87-day lightcurve. Middle panel: lightcurve after filtering out the slow modulations due to star spots and trends that result from data processing. There are 28 transit-like events. Bottom panel: a shorter 15-day segment of the lightcurve containing four of the transit-like events. Image via Rappaport et al/arXiv.

That publication was followed, in the days since, by hot debate on Twitter and Reddit. From the abstract:

We have identified a star, EPIC 249706694 (HD 139139), that was observed during K2 Campaign 15 with the Kepler extended mission that appears to exhibit 28 transit-like events over the course of the 87-day observation. The unusual aspect of these dips, all but two of which have depths of 200 ± 80 ppm, is that they exhibit no periodicity, and their arrival times could just as well have been produced by a random number generator. We show that no more than four of the events can be part of a periodic sequence. We have done a number of data quality tests to ascertain that these dips are of astrophysical origin, and while we cannot be absolutely certain that this is so, they have all the hallmarks of astrophysical variability on one of two possible host stars (a likely bound pair) in the photometric aperture. We explore a number of ideas for the origin of these dips, including actual planet transits due to multiple or dust emitting planets, anomalously large TTVs, S- and P-type transits in binary systems [see diagram below], a collection of dust-emitting asteroids, ‘dipper-star’ activity, and short-lived starspots. All transit scenarios that we have been able to conjure up appear to fail, while the intrinsic stellar variability hypothesis would be novel and untested. 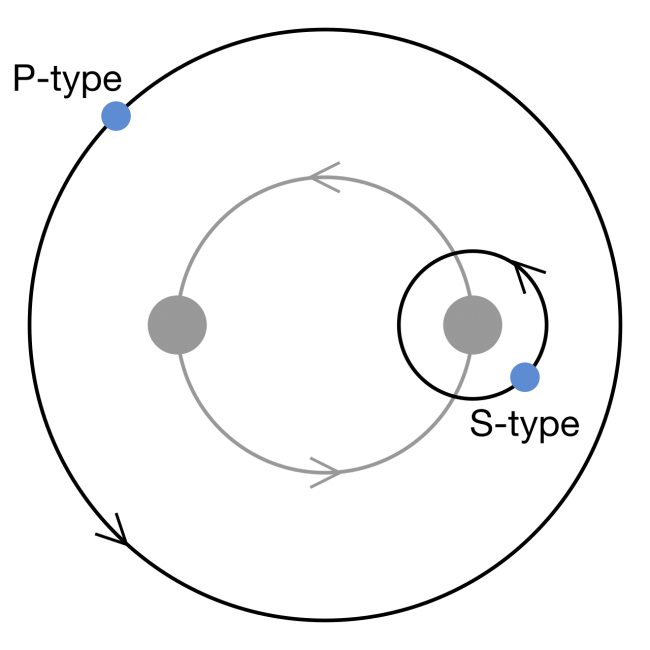 Schematic of a binary star system (gray circles) containing 2 planets: one on a P-type (Planetary-type, circumbinary) orbit and one on an S-type (Satellite-type) orbit. Not to scale. Astronomers considered these possible orbits when trying to explain the Random Transiter. Image via Philip D. Hall/Wikimedia Commons.

According to Andrew Vanderburg, an astronomer at the University of Texas at Austin:

We’ve never seen anything like this in Kepler [spacecraft data], and Kepler’s looked at 500,000 stars.

The Kepler planet-hunter spacecraft observed this star for 87 days during the secondary K2 part of its mission. When the data were analyzed, 28 dips were seen in the star’s brightness, much as you would see when planets transit in from of a star. Astronomers have very successfully used these dips in starlight – seen by Kepler and now by the TESS spacecraft, Kepler’s successor – to find new planet candidates.

But these 28 dips for HD 139139 seemed weird. Not only the number of them – that would be a lot of planets, or fewer planets in extremely short orbits around the stars – but also that they showed no signs of periodicity, as would be expected with planets. Each dip lasted between about 45 minutes to 7.5 hours, very short times for orbiting planets unless they were all close to the star. But if each planet orbited as quickly as inferred, then Kepler should have seen multiple, regular transits of them during the 80 days, but it didn’t. This shows that the orbits are more random somehow, not nice and neat with each planet orbiting in a certain amount of hours or days as is typically seen.

Also, all but one of the transits were about 200 ppm deep. This translate to 27 objects all roughly the same size, about 50 percent larger than Earth. The other object would be approximately twice that size. From what astronomers have seen so far in terms of exoplanets, it would be very unusual to have 27 planets all the same size in a single planetary system. Plus these planets don’t seem to orbit as normal planets do. So, if they’re not planets, what are they? 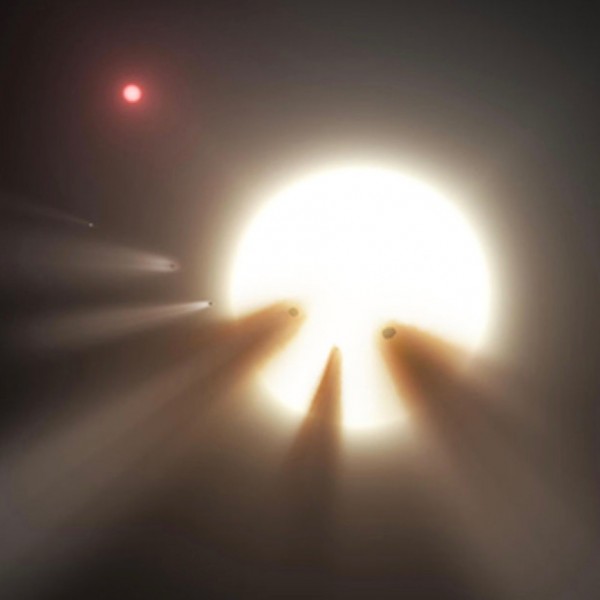 In recent years, Tabby’s Star (artist’s concept here) has been considered the weirdest known star in our galaxy. But now the Random Transiter may take that title. Image via NASA/JPL/Caltech/Vanderbilt University.

It’s more than a year since these observations now, and astronomers still don’t have an easy explanation. Right now, there are a plethora of theories being considered, but all of them have problems so far. As outlined by astronomer Hugh Osborn, these include:

– Multiple planets. The first obvious possibility, but would be very unusual, as already noted. That would still be the case even if it was 14 planets causing two dips each, regardless of which star they orbited in the binary system. The TRAPPIST-1 system has seven known Earth-sized planets, but all of them orbit the star in a normal manner, with stable, periodic orbits.

– Dust-emitting asteroids. This is similar to the disintegrating planet idea, but with multiple smaller bodies. The problem, though, is that the transits are almost all the same depth. Clumps of asteroids should produce dust clouds that are much more variable in size. They would also all have to be at just the right orbit to produce planet-sized dust clouds.

– Planets in a binary system. If the stars were moving, then not every orbit would produce a transit. That could work, but in this case it would need to be a triple star system, with another unseen star involved. The orbital periods for the planets and the main binary would need to be extremely short, and the team could not find a stable system which matched the data. Plus, the radial velocity measurements ruled out this being a triple system. 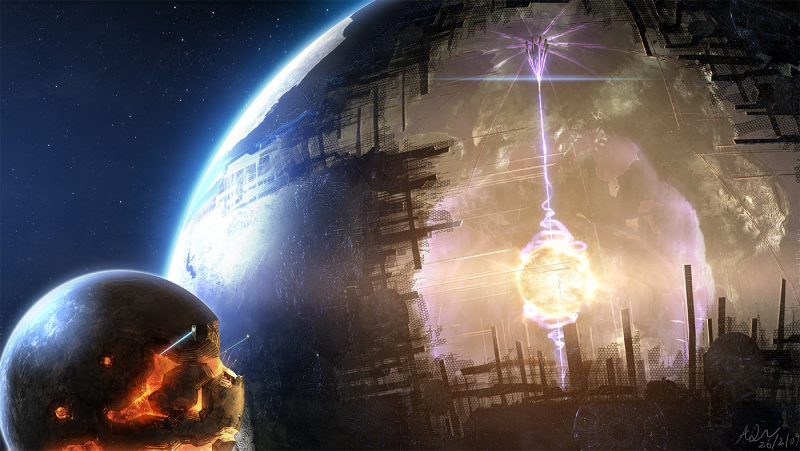 Could the transits be caused by something artificial, like multiple Dyson sphere-like objects? Maybe, but it is way too early to say one way or another, and natural explanations would need to be eliminated first. This image – called Shield World Construction – is by Adam Burn. More about it here. Image via FantasyWallpapers.

– A young dipper star. Young stars can have random clumps of dust orbiting them, part of the dust disk that still surrounds the star. But this doesn’t seem to work either. This star system is old, and there should still be periodicity as the dust clumps orbit the star. The dips of HD 139139 are far more ordered and “planet-like” than would be expected from dust clumps.

– Short-lived star spots. Could the transiting objects actually be spots on the star itself? Possibly, but this aspect of star behavior isn’t as well understood yet. In this case, the spots would need to form, block starlight for a few hours at most, and then dissipate.

– SETI. Now this is the idea that tends to naturally get the most attention, for obvious reasons. Could these be artificial planet-sized objects, similar to Dyson spheres or other megastructures? There’s not enough known yet about this star system to either rule it out or not. The possibility, even if unlikely (depending on who you talk to) is of course exciting, but a lot more evidence would need to be found first before saying it is a leading contender. Finding 14-28 large objects, all the same size except for one is definitely weird, but all conceivable natural explanations would need to be eliminated first. Occam’s razor says it’s more likely that a natural explanation will be found, but at this point, the possibilities remain wide open.

Other suggestions in online forums have included planets with huge ring systems, similar to J1047b, or “dust avalanches” where a dust ring close to the star is fed by dust spiraling in from elsewhere. Another idea was that there were planets orbiting multiple stars, but the other stars just happened to be hidden from view by HD 139139, by chance. I asked Osborn about that possibility on Twitter and he responded:

Possible, sure. But this star's radius, when viewed from Earth, is 0.000000014 degrees, so the probability of having an entirely unrelated star (with planets) crossing exactly that stellar disc is *extremely* small. But it's a weird system, so Occam's razor is struggling already!

Astronomer Ben Montet has theorized that at least some of the transits might be caused by a circumbinary planet – orbiting both stars – but like everything else, it is just a hypothesis at this point.

So as of now, there are a lot of questions, but few answers, much how the Tabby’s Star saga began. Tabetha Boyajian herself, the astronomer the star was nicknamed after, weighed in on the case of the Random Transiter and whether aliens should be considered at this point:

I think we have to consider all options before we go there. This is one of those systems where it’s probably not going to be figured out without more data.

Bottom line: The Random Transiter is definitely a very weird star with transits that look like ones made by planets, but the objects don’t seem to behave like normal orbiting planets.