Posted by
Deborah Byrd
and
Eleanor Imster
and

The International Astronomical Union (IAU) — which has been assigning names to celestial bodies since its inaugural meeting in 1922 — released the winners of its NameExoWorlds contest today (December 15, 2015). The IAU is now honoring a public vote to create new names for 14 stars and 31 exoplanets orbiting around them. More than half a million votes from 182 countries and territories contributed to the IAU’s new official designations of the alien suns and worlds.

The new names include Poltergeist, Phobetor (Greek god of nightmares) and Draugr (undead creatures from Norse mythology) for the first exoplanets ever discovered, orbiting pulsar PSR 1257+12 (newly renamed Lich, or “corpse”). It’s a pulsar, get it? A dead star.

Another famous star in the exoplanet community is 51 Pegasi, the first sunlike star known to have a planet. The planet was formerly known as 51 Pegasi b. The IAU has now sanctioned the name Helvetios for the star and Dimidium for the planet.

Fomalhaut b is another important star in this context. Its planet – formerly called Fomalhaut b – was the first exoplanet ever to be imaged directly. The planet has now been named Dagon, a Semitic deity that’s half man and half fish.

Per the contest’s guidelines, all the newly adopted names take the form of mythological figures from a wide variety of cultures across history, as well as famous scientists, fictional characters, ancient cities and words selected from bygone languages.

Voting concluded on October 31, 2015, with a total of 573,242 votes from the public contributing to the naming of 31 exoplanets and 14 host stars outside our solar system.

The public voted on the 274 proposed names submitted by a wide variety of astronomy organizations from 45 countries all over the world — including amateur astronomy groups, schools, universities and planetariums. The successful entries were received from across the globe — four were received from North America (USA, Canada), one from Latin America (Mexico), two from the Middle East & Africa (Morocco, Syria), six from Europe (France, Italy, Netherlands, Spain, Switzerland), and six from Asia-Pacific (Australia, Japan, Thailand).

Here is the list of winning names, with the official scientific nomenclature, the new name, and the winning name’s country of origin: 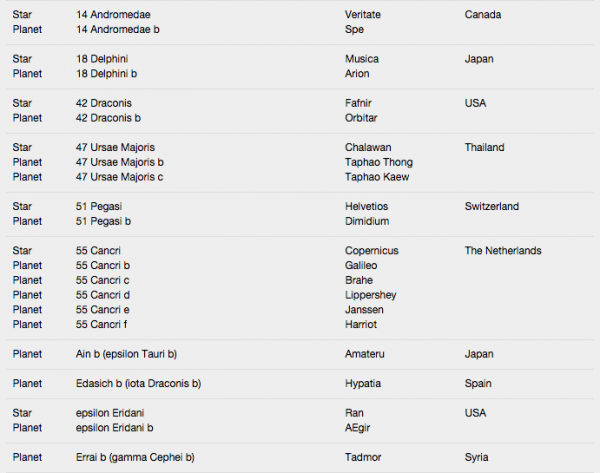 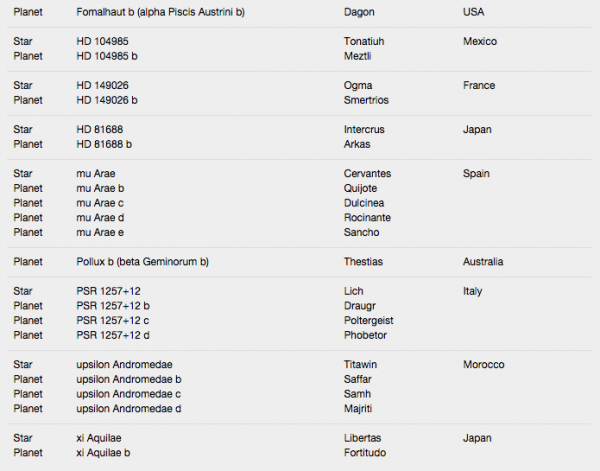 The complete results, including vote counts, proposers, and citations are published on the IAU NameExoWorlds website.

It’ll be fascinating to see how quickly astronomers and the public start using these names!

And it’ll be even more fascinating if we someday learn that some of these distant bodies in space already have names, given to them by extraterrestrial cultures. How about that for an idea?

Bottom line: On December 15, 2015, the International Astronomical Union (IAU) released the winners of its NameExoWorlds contest. A public vote chose the new names of 14 stars and 31 exoplanets orbiting around them.

Thank you! Your submission has been received!
Oops! Something went wrong while submitting the form.
END_OF_DOCUMENT_TOKEN_TO_BE_REPLACED