No Earth-like atmosphere for Proxima b

It’s the nearest exoplanet and in its star’s habitable zone. But a new study suggests radiation from its star would drain an Earth-like atmosphere 10,000 times faster than on Earth. 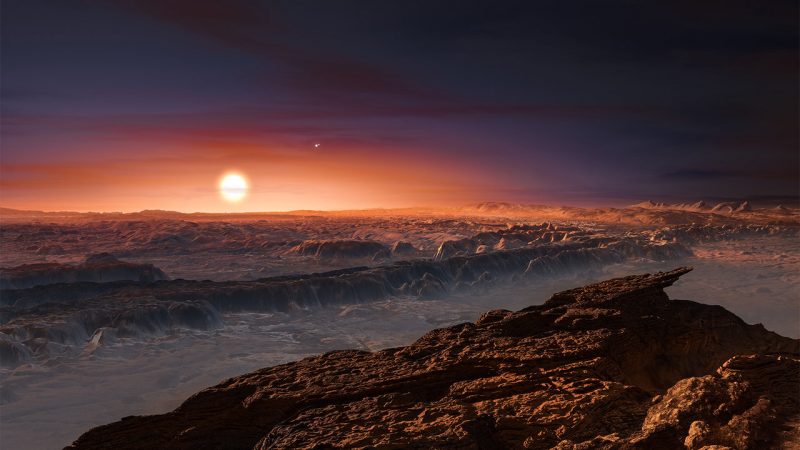 Artist’s concept of the surface of the Proxima b, nearest known exoplanet. It orbits the red dwarf star Proxima Centauri, closest star to our solar system. The double star Alpha Centauri AB also appears in the image to the upper-right of Proxima itself. Image via NASA’s Goddard Space Flight Center.

In August 2016, when scientists announced the discovery of a planet orbiting the nearest known star, Proxima Centauri, people got excited. That’s largely because it’s not just any planet: it’s a planet similar in size to Earth, orbiting in its star’s habitable zone. At 4.2 light-years or 25 trillion miles from Earth, Proxima b is vastly too far away to be explored in our lifetimes (although that hasn’t stopped dreamers and visionaries like those at Breakthough Initiatives from devising plans to explore it). Still, theoretical studies are the order of the day for Proxima b. A recent one suggests that Proxima b:

…may not be able to keep a grip on its atmosphere, leaving the surface exposed to harmful stellar radiation and reducing its potential for habitability.

Habitable zone, to astronomers, means the potential for liquid water to exist on a planet’s surface. Life, as we know it, needs water. But an atmosphere is another essential ingredient for life. The team’s statement said:

Having the right atmosphere allows for climate regulation, the maintenance of a water-friendly surface pressure, shielding from hazardous space weather, and the housing of life’s chemical building blocks.

This new computer model – which was part of a NASA study, published on July 24, 2017, in the peer-reviewed Astrophysical Journal Letters – considered what would happen if Earth orbited Proxima Centauri. The study suggests Earth’s atmosphere wouldn’t survive in such close proximity to Proxima, which is an active red dwarf star that emits high-energy extreme ultraviolet radiation. This radiation has the potential to ionize gases in a planet’s atmosphere; that is, it knocks electrons off atoms and produces a swath of electrically charged particles. In this process, the newly formed electrons gain enough energy that they can readily escape a planet’s gravity and race out of the atmosphere.

On Earth, this clearly isn’t happening, but our sun is a more sedate star than Proxima. Katherine Garcia-Sage, a space scientist at NASA’s Goddard Space Flight Center in Greenbelt, Maryland, is lead author of the new study. She and her colleagues’ computer model used Earth’s atmosphere, magnetic field and gravity as proxies for Proxima b’s.

They also calculated how much radiation Proxima Centauri produces on average, based on observations from NASA’s Chandra X-ray Observatory. 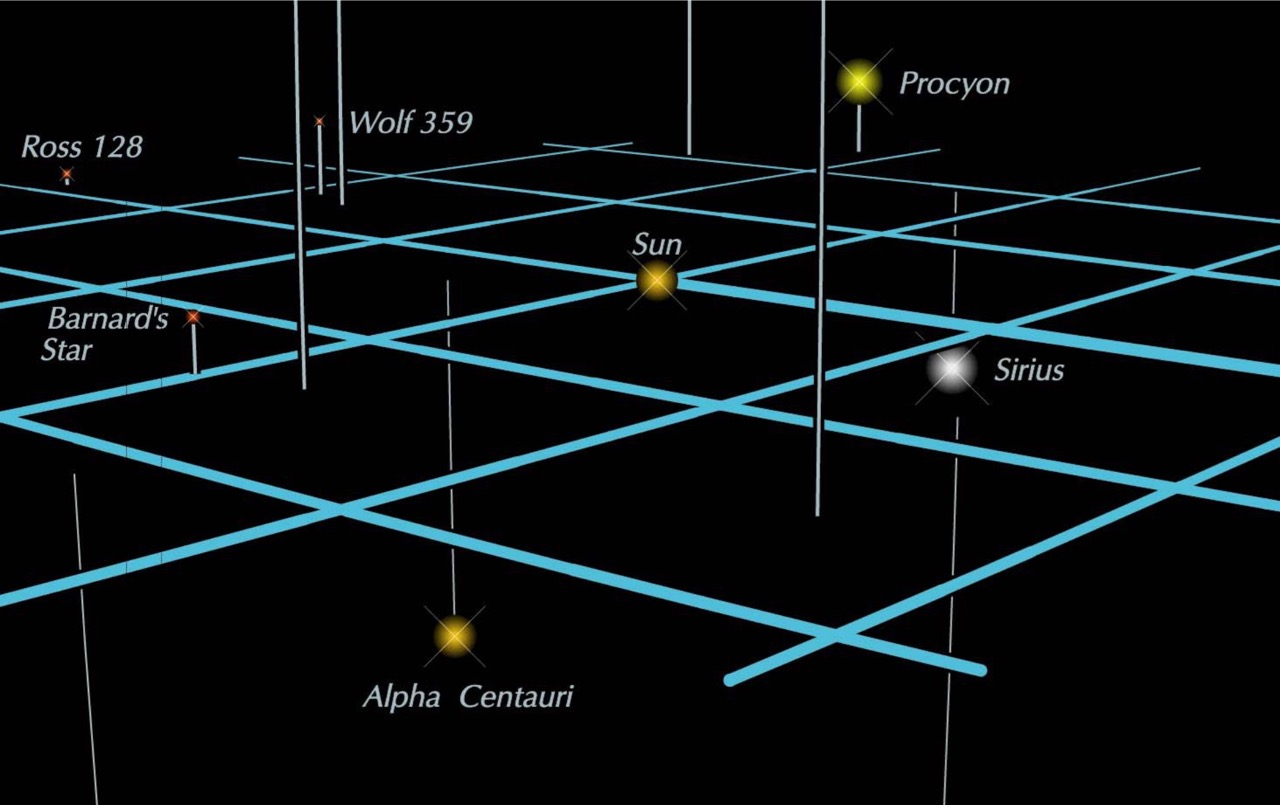 In Proxima Centauri’s habitable zone, Proxima b encounters bouts of extreme ultraviolet radiation hundreds of times greater than Earth does from the sun. That radiation generates enough energy to strip away not just the lightest molecules — hydrogen — but also, over time, heavier elements such as oxygen and nitrogen. Ofer Cohen, a space scientist at the University of Massachusetts, Lowell and co-author of the study, said:

The question is, how much of the atmosphere is lost, and how quickly does that process occur?

If we estimate that time, we can calculate how long it takes the atmosphere to completely escape — and compare that to the planet’s lifetime.

The model shows Proxima Centauri’s powerful radiation drains the Earth-like atmosphere as much as 10,000 times faster than what happens at Earth. Garcia-Sage said:

This was a simple calculation based on average activity from the host star. It doesn’t consider variations like extreme heating in the star’s atmosphere or violent stellar disturbances to the exoplanet’s magnetic field — things we’d expect provide even more ionizing radiation and atmospheric escape. 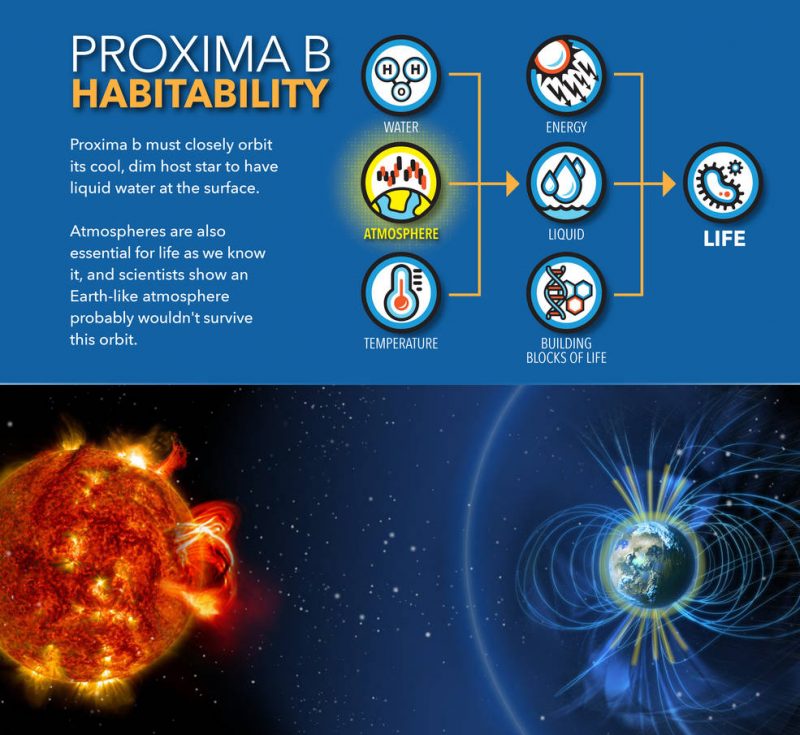 At its orbital distance from its star Proxima Centauri, the exoplanet Proxima b – nearest known exoplanet to Earth – likely couldn’t sustain an Earth-like atmosphere, according to a new theoretical study. Image via NASA’s Goddard Space Flight Center/ Mary Pat Hrybyk-Keith.

Shawn Domagal-Goldman, a Goddard space scientist not involved in the study, said:

This study looks at an under-appreciated aspect of habitability, which is atmospheric loss in the context of stellar physics. Planets have lots of different interacting systems, and it’s important to make sure we include these interactions in our models.

The scientists show that with the highest thermosphere temperatures and a completely open magnetic field, Proxima b could lose an amount equal to the entirety of Earth’s atmosphere in 100 million years — that’s just a fraction of Proxima b’s 4 billion years thus far. When the scientists assumed the lowest temperatures and a closed magnetic field, that much mass escapes over 2 billion years. Jeremy Drake, an astrophysicist at the Harvard-Smithsonian Center for Astrophysics and co-author of the study, said:

Things can get interesting if an exoplanet holds on to its atmosphere, but Proxima b’s atmospheric loss rates here are so high that habitability is implausible. This questions the habitability of planets around such red dwarfs in general.

Another red dwarf star recently in the news is the star TRAPPIST-1. Such stars are often the target of exoplanet hunts, because they are the coolest, smallest and most common stars in the galaxy. Because they are cooler and dimmer, planets have to maintain tight orbits for liquid water to be present.

But unless the atmospheric loss is counteracted by some other process — such as a massive amount of volcanic activity or comet bombardment — this close proximity, scientists are finding more often, is not promising for an atmosphere’s survival or sustainability, these scientists say.

Bottom line: Proxima b is the nearest known exoplanet and orbits in its star’s habitable zone. But a new study suggests it might not be able to hold onto its atmosphere long enough for life to develop.