Astronomers are meeting today at the Planetary Defense Conference to discuss plans to observe asteroid 99942 Apophis, a relatively large asteroid that’ll sweep past Earth safely – but rather closely – in 2029.

This animation shows the distance between the Apophis asteroid and Earth at the time of the asteroid’s closest approach in 2029. The blue dots are manmade satellites orbiting our planet, and the pink represents the International Space Station. Image via NASA/JPL-Caltech.

Asteroid experts are meeting this week in College Park, Maryland, at the 2019 Planetary Defense Conference. This conference brings together world experts to discuss:

… the threat to Earth posed by asteroids and comets, and actions that might be taken to deflect a threatening object.

Yes. Movies and sci-fi novels notwithstanding, professional astronomers really do talk of such things, as, over the past several decades, the potential threat to Earth from asteroid impacts has become better understood. One topic of high interest for the week happened on April 30, 2019. It’s a session on the 2029 passage of an asteroid known as 99942 Apophis. The scientists discussed a range of topics about asteroid Apophis including how to observe it when it passes Earth in 2029, as well as hypothetical missions we could send out to the asteroid. NASA wrote of this asteroid:

On April 13, 2029, a speck of light will streak across the sky, getting brighter and faster. At one point it will travel more than the width of the full moon within a minute and it will get as bright as the stars in the Little Dipper. But it won’t be a satellite or an airplane – it will be a 1,100-foot-wide (340-meter-wide) near-Earth asteroid called 99942 Apophis that will cruise harmlessly by Earth, about 19,000 miles (31,000 km) above the surface. That’s within the distance that some of our spacecraft that orbit Earth.

Asteroid Apophis – unfortunately named for an ancient Egyptian “lord of chaos” – has been known since 2004. It is a near-Earth object (NEO); that is, its orbit – which is less than one earthly year long – brings it near Earth periodically. This asteroid caused a brief period of concern shortly after its discovery in 2004. When relatively few observations of its orbit were in hand – and thus its orbit wasn’t known with much certainty – there was, for a time, a probability of up to 2.7 percent that it would hit Earth on April 13, 2029. That possibility became lower and lower as astronomers used both optical and radar telescopes to track Apophis over subsequent years, and got a better understanding of its orbit. A strike in 2029 was entirely ruled out during a 2013 pass of the asteroid. Still, in 2004, during its time of infamy as an asteroid that might strike Earth, Apophis set the record for the highest rating on the Torino scale, reaching level 4 on by the end of that year. 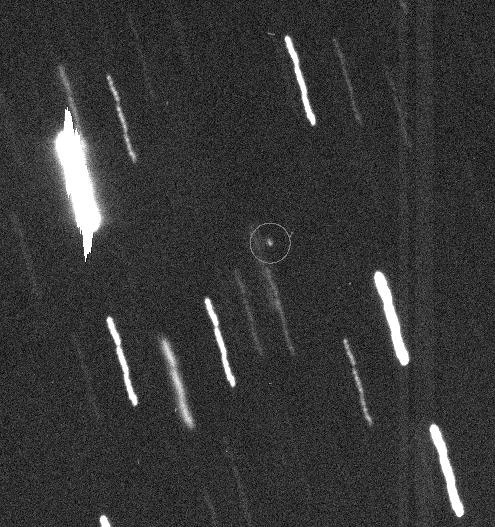 Astronomers discovered asteroid Apophis on June 19, 2004. At first, when its orbit was not well understood, there was brief concern it had the potential to strike Earth in this century. Image via UH/IA/NASA.

There was also brief talk of asteroid Apophis possibly striking Earth during its 2036 pass. However, the 2036 possibility has also been ruled out.

As of 2014, the diameter of Apophis is estimated to be approximately 1,210 ft (370 meters). That’s hardly a world-destroying size, but an asteroid of this size could obliterate a city. According to some estimates, an asteroid the size of Apophis can be expected to strike Earth about every 80,000 years. For comparison, the object that struck Earth during the 1908 Tunguska event had an estimated size of 200 to 620 feet (60 to 190 meters).

That’s why the 2029 pass of asteroid Apophis has such high interest for scientists. NASA said that, although scientists have spotted small asteroids, on the order of 16 to 33 ft (5-10 meters), flying by Earth at a similar distance, asteroids the size of Apophis are far fewer in number and so do not pass this close to Earth as often.

During the April 30 discussion session at the Planetary Defense Conference, astronomers gathered to discuss observation plans and science opportunities for the 2029 pass of asteroid Apophis. Marina Brozovic, a radar scientist at NASA’s Jet Propulsion Laboratory in Pasadena, California, who works on radar observations of near-Earth objects (NEOs), said:

The Apophis close approach in 2029 will be an incredible opportunity for science. We’ll observe the asteroid with both optical and radar telescopes. With radar observations, we might be able to see surface details that are only a few meters in size.

They’ll also be trying to make a close-up study of Apophis’ size, shape, composition and possibly even its interior. At this week’s conference, scientists will be discussing questions like:

– How will Earth’s gravity affect the asteroid as it passes by?

– Can we use Apophis’ flyby to learn about an asteroid’s interior?

– Should we send a spacecraft mission to Apophis?

A model of the shape of asteroid Apophis, generated from its light curve and assuming that all areas of the asteroid have a similar albedo and reflectivity, via the Database of Asteroid Models from Inversion Techniques (DAMIT) and and Wikimedia Commons.

Davide Farnocchia, an astronomer at JPL’s Center for Near Earth Objects Studies (CNEOS), who co-chaired the April 30 session on Apophis with Brozovic, said:

We already know that the close encounter with Earth will change Apophis’ orbit, but our models also show the close approach could change the way this asteroid spins, and it is possible that there will be some surface changes, like small avalanches.

Apophis is a representative of about 2,000 currently known Potentially Hazardous Asteroids (PHAs). By observing Apophis during its 2029 flyby, we will gain important scientific knowledge that could one day be used for planetary defense.

NASA said that asteroid Apophis will look “like a moving star-like point of light” to earthly observers during the 2029 pass. It said the asteroid:

… will first become visible to the unaided eye in the night sky over the Southern Hemisphere, flying above Earth from the east coast to the west coast of Australia. It will be mid-morning on the East Coast of the United States when Apophis is above Australia. It will then cross the Indian Ocean, and by the afternoon in the eastern U.S. it will have crossed the equator, still moving west, above Africa. At closest approach, just before 6 p.m. EDT, Apophis will be over the Atlantic Ocean – and it will move so fast that it will cross the Atlantic in just an hour. By 7 p.m. EDT, the asteroid will have crossed over the United States.

Astronomers will be watching!

Bottom line: Astronomers met on April 30, 2019, at the Planetary Defense Conference to discuss plans to observe asteroid 99942 Apophis, a relatively large asteroid that’ll sweep past Earth safely – but rather closely – a decade from now.