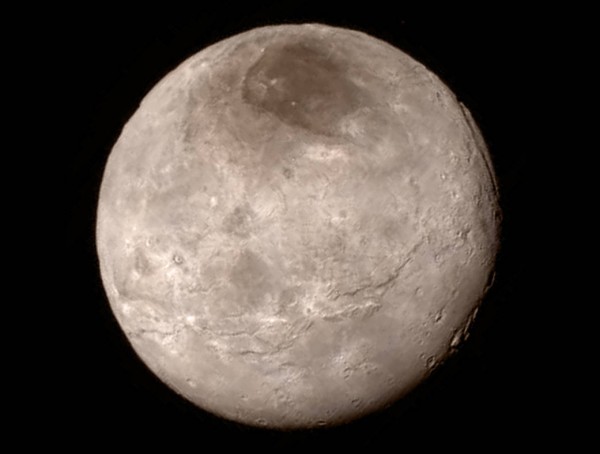 View larger. | New Horizons image taken when the craft was closest to the Pluto system on July 14, 2015.

New Horizons’ Long Range Reconnaissance Imager (LORRI) acquired this image of Pluto’s large moon Charon late on July 13, 2015 – shortly before New Horizons’ closest approach – from a distance of 289,000 miles (466,000 km). Notice the lack of craters? South of the moon’s equator, at the bottom of this image, terrain is lit by the slanting rays of the sun, creating shadows that make it easier to distinguish topography. Even here, however, relatively few craters are visible, indicating a relatively young surface that has been reshaped by geologic activity.

In Charon’s north polar region, a dark marking prominent in New Horizons’ approach images is now seen to have a diffuse boundary, suggesting it is a thin deposit of dark material. This dark polar area stretches for about 200 miles (about 300 km). Scientists are calling this dark pole on Charon by the nickname “Mordor.”

You can also see a swath of cliffs and troughs in the image above, stretching about 600 miles (1,000 km) from left to right, suggesting widespread fracturing of Charon’s crust, likely a result of internal processes.

At upper right, along the moon’s curving edge, is a canyon estimated to be 4 to 6 miles (7 to 9 kilometers) deep.

The image has been compressed to reduce its file size for transmission to Earth. In high-contrast areas of the image, features as small as 3 miles (5 kilometers) across can be seen. Some lower-contrast detail is obscured by the compression of the image, which may make some areas appear smoother than they really are. The uncompressed version still resides in New Horizons’ computer memory and is scheduled to be transmitted at a later date.

The image has been combined with color information obtained by New Horizons’ Ralph instrument on July 13. 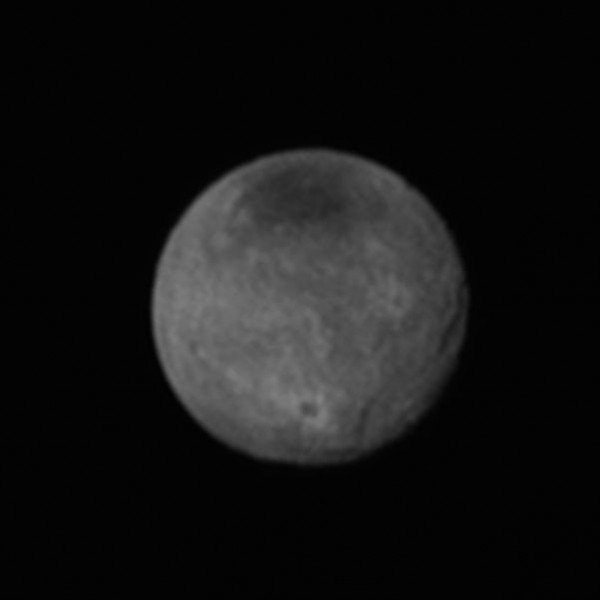 The image above of Pluto’s moon Charon was acquired by New Horizons on July 11, 2015.

The New Horizons images early on began showing Charon to be a world of chasms and craters, NASA says.

The most pronounced chasm, which lies in Charon’s southern hemisphere, is longer and miles deeper than Earth’s Grand Canyon, according to William McKinnon, deputy lead scientist with New Horizon’s Geology and Geophysics investigation team. He said:

This is the first clear evidence of faulting and surface disruption on Charon.

New Horizons has transformed our view of this distant moon from a nearly featureless ball of ice to a world displaying all kinds of geologic activity.

The most prominent crater, which lies near the south pole of Charon in an image taken July 11 and radioed to Earth on July 12, is about 60 miles (96.5 kilometers) across. The brightness of the rays of material blasted out of the crater suggest it formed relatively recently in geologic terms, during a collision with a small Kuiper Belt Object (KBO) some time in the last billion years.

By the way, New Horizons principle investigator Alan Stern said earlier this week at a press briefing that one of his biggest surprises in the mission so far is that no new moons have been found.

Bottom line: Chasms, craters, and a dark north polar region are revealed in this image of Pluto’s largest moon Charon taken by New Horizons on July 11, 2015.