Sailing on sunbeams. LightSail successfully launched May 20 at 11:05am EDT (1505 UTC). Info on how to follow from here, below. 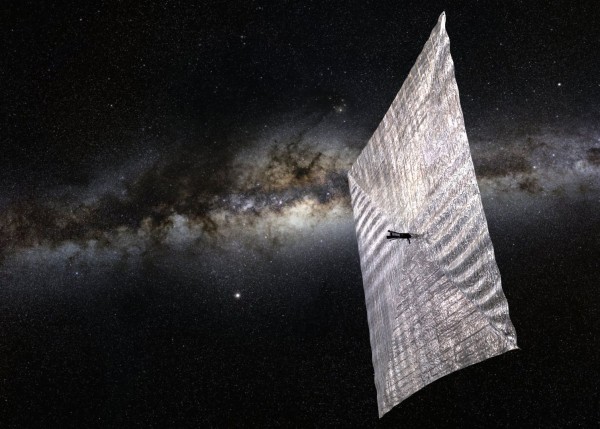 Artist’s illustration of Planetary Society’s LightSail, set against the backdrop of the Milky Way.

The Planetary Society’s solar sail satellite – known as LightSail – has hitched a ride to space aboard an Atlas V rocket. The rocket launched successfully from Cape Canaveral Air Force Station in Florida today (May 20, 2015). It has now deployed successfully in space. From here, LightSail – which is about the size of a loaf of bread – will undergo a test of the satellite’s critical functions.

Get live updates here, via the Planetary Society

Read what will happen on LightSail’s first day in space.

This week’s test is a precursor to a second mission, slated for 2016. Bill Nye (The Science Guy), CEO at The Planetary Society, said when they announced the test in January:

There’s an old saying in aerospace, ‘One test is worth a thousand expert opinions.’ After six years of development, we’re ready at last to see how LightSail flies.

But wait, there’s more: this unique, remarkable spacecraft is funded entirely by private citizens, people who think spaceflight is cool.

Star travel has been, and remains, a cherished dream among space fans. But the question is … how to get there? Travel by light sail is perhaps the most romantic notion for star travel, relying on thin, lightweight reflective sails, powered by the sun or other stars. You start slow, but accelerate up to very fast speeds. Okay, maybe we’re not ready for star travel anytime soon, but maybe travel between planets in our own solar system? That’s perhaps closer to the goal of the Planetary Society, as it embarks on its May, 2015 test flight.

See the planets! Best photos from last night of moon, Venus and Jupiter

The video below is really cool. It’s Carl Sagan explaining LightSail to Johnny Carson, on the original Tonight show, in 1976. Don’t miss it!

This week’s test flight will not carry LightSail high enough to escape Earth’s atmospheric drag, and will thus not demonstrate controlled solar sailing. Once in orbit, the spacecraft will go through a checkout and testing period of about four weeks before deploying its solar sails. After the sails unfurl, LightSail will test its attitude control system and study the behavior of the sails for a few days before it is pulled back into the planet’s atmosphere.

Key images and data on the spacecraft’s performance will be sent to ground stations at Cal Poly San Luis Obispo and Georgia Tech.

LightSail’s second flight, scheduled for 2016, will mark the first controlled, Earth-orbit solar sail flight. The plan there is that LightSail will ride along with the first operational launch of SpaceX’s Falcon Heavy rocket.

With the expected launch of LightSail – a craft propelled among the stars on the pressure of light itself – the expanse of space becomes a literal analogue to the open seas. If space is tomorrow’s ocean, then Earth’s surface is its shoreline.

Read what NASA has to say about the Planetary Society’s LightSail test. 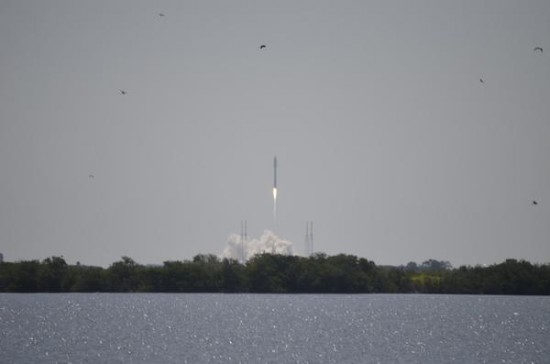 LightSail launch from Cape Canaveral Air Force Station in Florida, aboard an Atlas V rocket, on May 20, 2015. Image via Planetary Society.

Bottom line: Space travel by LightSail relies on thin, lightweight reflective sails, powered by the sun. The Planetary Society has now successfully launch its May, 2015 LightSail test mission. It’ll be followed by a second launch in 2016. The project is entirely funded by private citizens. How to get updates on the ongoing LightSail test, here.