With only a month left of the Rosetta mission, the Philae comet lander has been found wedged into a dark crack on Comet 67P/Churyumov–Gerasimenko. 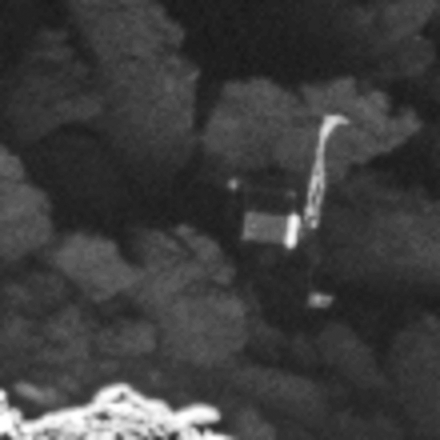 Close-up of the Philae lander, imaged by Rosetta’s OSIRIS camera on September 2, 2016. Philae’s 1-meter-wide body and two of its three legs can be seen extended from the body. Image via ESA.

Remember how exciting it was when the Rosetta spacecraft began orbiting Comet 67P/Churyumov–Gerasimenko in August of 2014? The mission has been so fantastic and has revealed this comet in such magnificent detail, and yet it was a bit of a let-down when the Philae comet lander got lost after its initial landing thud on the comet’s surface. The lander apparently bounced in the comet’s low gravity to … well, no one knew where. But now less than a month before the end of the mission, Rosetta – still in orbit – has revealed the Philae lander wedged into a dark crack on the comet.

The images were taken on 2 September by the OSIRIS narrow-angle camera as the orbiter came within 2.7 km of the surface and clearly show the main body of the lander, along with two of its three legs.

The images also provide proof of Philae’s orientation, making it clear why establishing communications was so difficult following its landing on 12 November 2014. 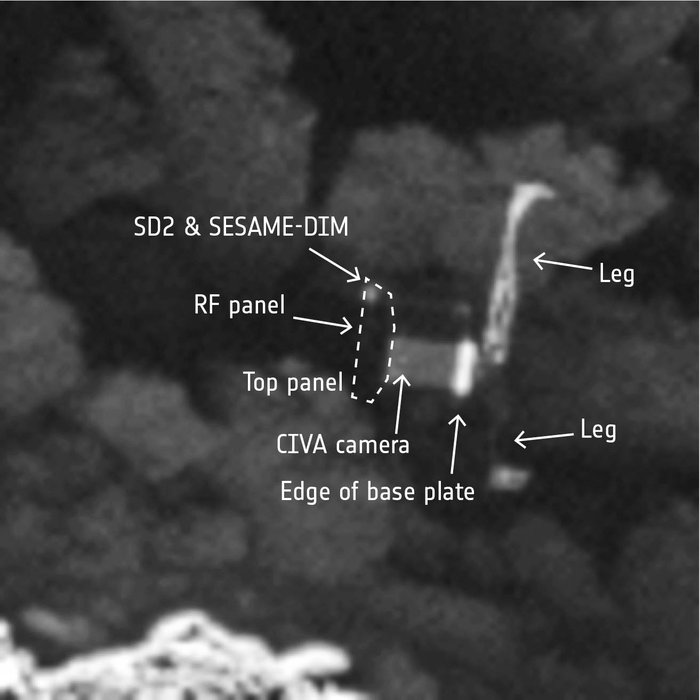 A number of Philae’s features can be made out in this image taken by Rosetta’s OSIRIS narrow-angle camera image on September 2, 2016, from a distance of 1.7 miles (2.7 km). Philae’s 1-meter-wide body and two of its three legs can be seen extended from the body. Image via ESA.

Cecilia Tubiana of the OSIRIS camera team, the first person to see the images when they were downlinked from Rosetta on September 4, 2016, said:

With only a month left of the Rosetta mission, we are so happy to have finally imaged Philae, and to see it in such amazing detail.

This remarkable discovery comes at the end of a long, painstaking search. We were beginning to think that Philae would remain lost forever. It is incredible we have captured this at the final hour.

Read more about the discovery of Philae from ESA!

Read more about the final days of Rosetta’s mission 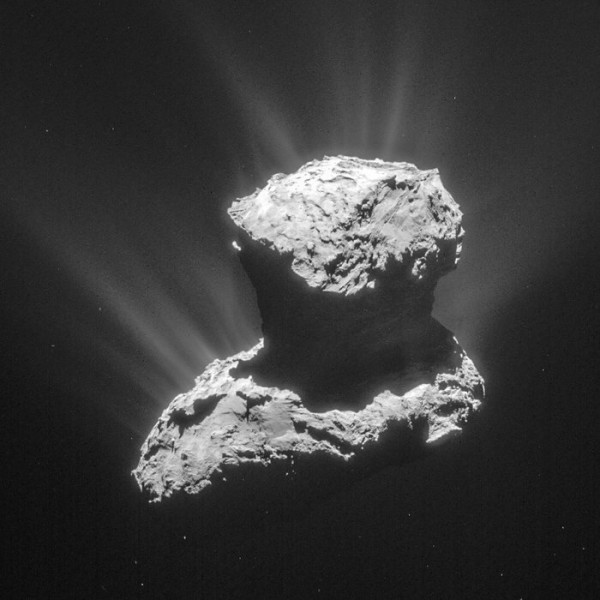 We learned so much from the Rosetta mission and saw comets as they were never seen before. This single frame from Rosetta’s navigation camera of Comet 67P/Churyumov–Gerasimenko was taken on March 25, 2015. Read more about this image from ESA.

Bottom line: With only a month left of the Rosetta mission, the Philae comet lander has been found wedged into a dark crack on Comet 67P/Churyumov–Gerasimenko.