1st image from inside sun’s atmosphere

NASA’s Parker Solar Probe has now swept within the sun’s corona, or outer atmosphere.. No other spacecraft has ever come this close to the sun’s surface! And, it’s going to get closer. 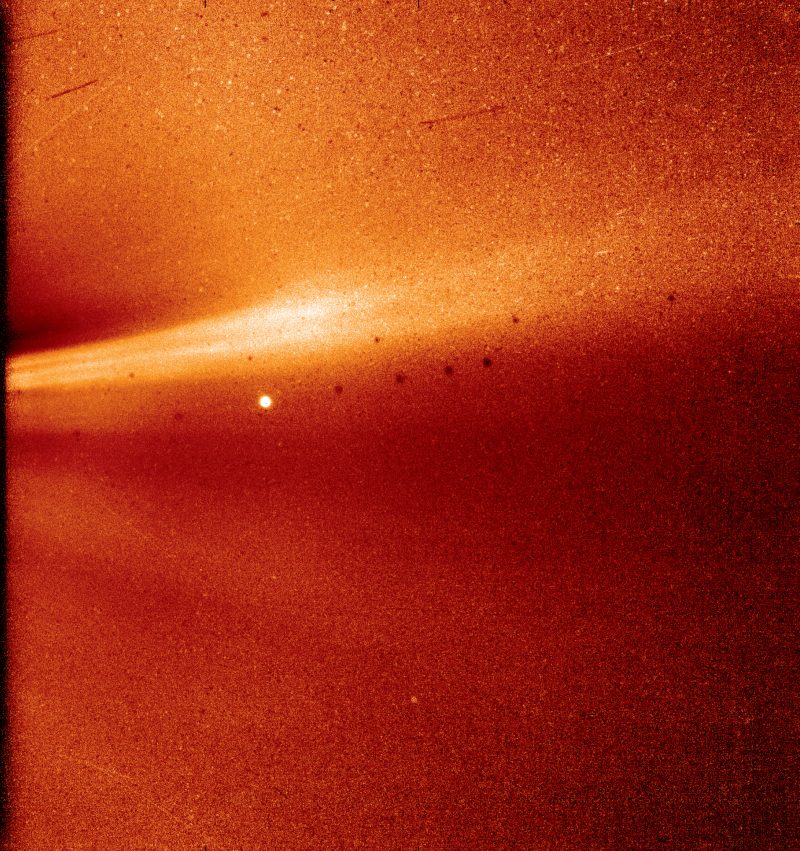 Parker Solar Probe acquired this image – 1st-ever photo taken from inside the sun’s outer atmosphere, or corona – on December 8, 2018. The bright streak is a coronal streamer. The bright object near the center is the sun’s innermost planet, Mercury. The dark spots are a result of background correction. Image via NASA/Naval Research Laboratory/Parker Solar Probe.

We’ve all seen stunning images of the sun, both from the ground and from telescopes in space. The sun is a magnificent, hot, glowing ball of gas with its enormous solar prominences of hot plasma – much larger than Earth – arcing out into the surrounding blackness. Up to now, all photos of the sun have been taken from a great distant from the sun itself, given the sun’s extreme heat.

But now, NASA’s Parker Solar Probe has gone where no spacecraft has gone before, flying much closer to the sun’s surface than any other probe. It has just sent back the first photos ever from inside the sun’s atmosphere. NASA released the photos on December 12, 2018.

Parker Solar Probe acquired the image above – the first photo from inside the sun’s outer atmosphere, or corona, the part of the sun we see in photos of total solar eclipses – when the craft was only 16.9 million miles (27.2 million km) from the sun’s surface. That sounds like a long distance. Consider that Earth itself is 93 million miles (150 million km) – and the innermost planet Mercury is about 36 million miles (58 million km) – from the sun. The Parker Solar Probe has now come within the sun’s corona or outer atmosphere. Space scientists presented the image during the fall meeting of the American Geophysical Union in Washington D.C.

In the image above, the bright streaks coming from the left are jets of material called coronal streamers – also known as helmet streamers – emanating from the sun itself, which is just out of view. They are huge, extending above most other solar prominences, and can be seen during solar eclipses.

And all those spots? The bright one is Mercury in the distance, while the dark ones are just imaging artifacts from the background correction processing of the image. 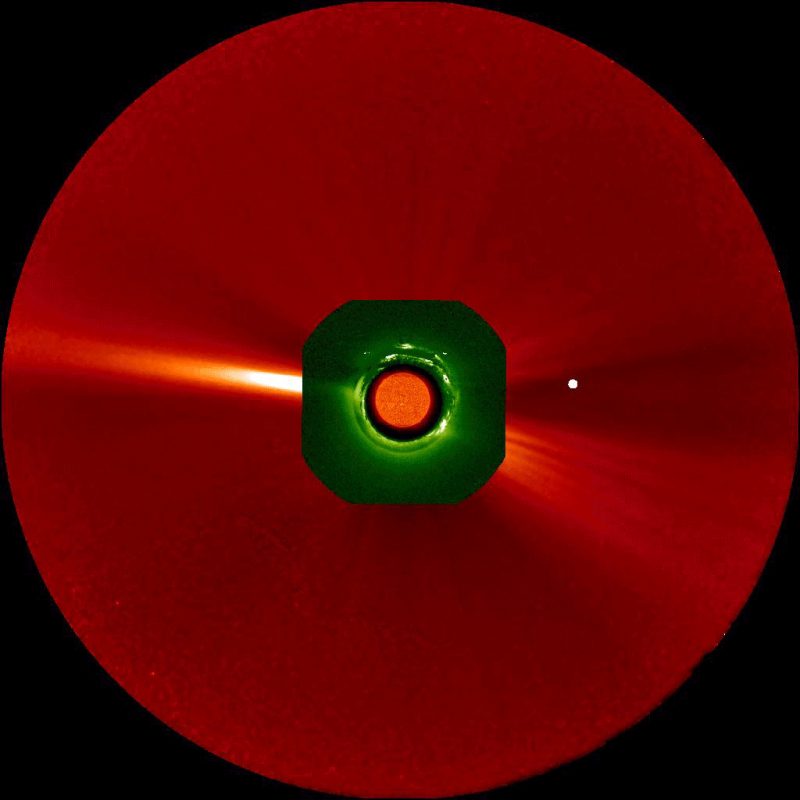 Still frame of a movie from NASA’s Solar and Terrestrial Relations Observatory Ahead (STEREO-A) spacecraft (one of two twin probes), along with the location of Parker Solar Probe (bright dot) as it flies through the sun’s outer atmosphere during its first solar encounter phase in November 2018. Image via NASA/STEREO.

Parker Solar Probe recently accomplished its closest pass of the sun so far, completing the first solar encounter phase from October 31 to November 11, 2018. During this time, the spacecraft sped through the sun’s corona while collecting data with four different suites of instruments. This is a historic mission, according to Nicola Fox, director of the Heliophysics Division at NASA Headquarters:

Heliophysicists have been waiting more than 60 years for a mission like this to be possible. The solar mysteries we want to solve are waiting in the corona.

Heliophysics is the study of the sun and how it affects space near Earth and throughout the entire solar system.

Parker Solar Probe also broke two other records last October, traveling closer to the sun than any other man-made object and becoming the fastest spacecraft in history.

As it keeps orbiting closer and closer to the sun, it will eventually match the rotation speed of the sun. Isn’t that amazing? This speed will allow scientists to remove the effects of the sun’s rotation in data that is sent back, which could cause errors. 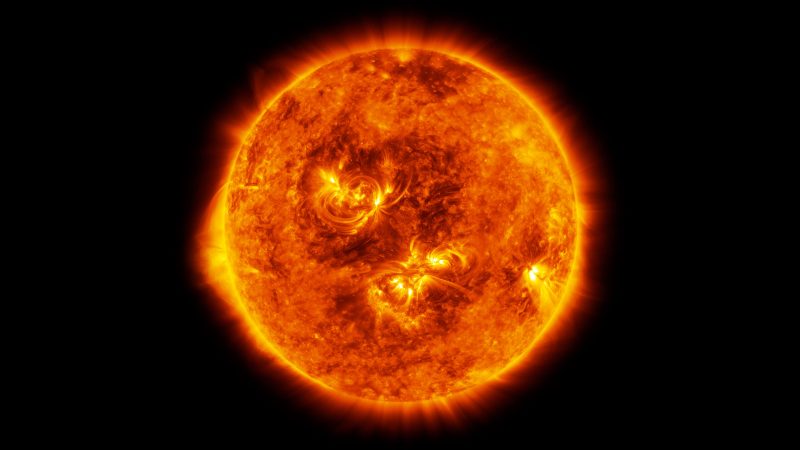 The sun as seen by NASA’s Solar Dynamics Observatory (SDO) in October 2017. Image via NASA/SDO/Seán Doran.

– How is the sun’s outer atmosphere, the corona, heated to temperatures about 300 times higher than the visible surface below?
– How is the solar wind accelerated so quickly to the high speeds we observe?
– How do some of the sun’s most energetic particles rocket away from the sun at more than half the speed of light?

According to Nour Raouafi, the mission’s project scientist at the Johns Hopkins University Applied Physics Lab:

Parker Solar Probe is providing us with the measurements essential to understanding solar phenomena that have been puzzling us for decades. To close the link, local sampling of the solar corona and the young solar wind is needed and Parker Solar Probe is doing just that.

Being so close to the sun gives Parker Solar Probe a unique opportunity to study these phenomena in a way that has never been possible before. As explained by Raouafi:

We don’t know what to expect so close to the sun until we get the data, and we’ll probably see some new phenomena. Parker is an exploration mission – the potential for new discoveries is huge. 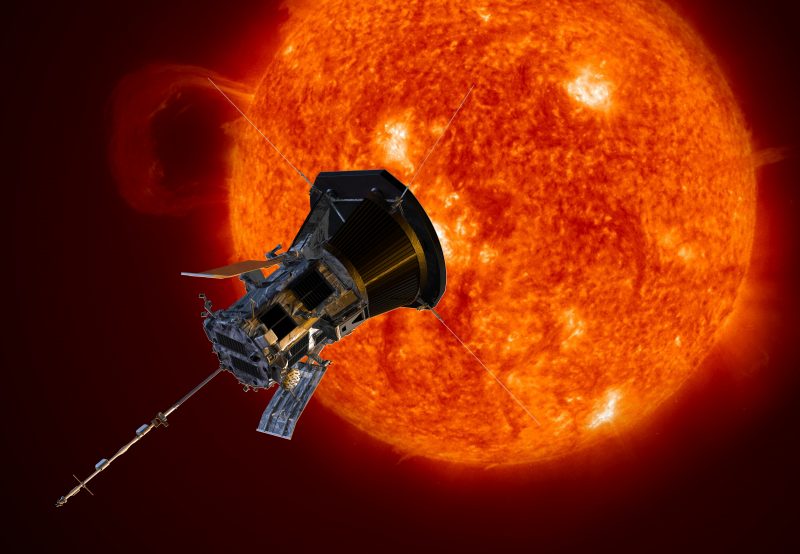 Parker Solar Probe is going to a region we’ve never visited before. Meanwhile, from a distance, we can observe the sun’s corona, which is driving the complex environment around Parker Solar Probe.

The science data from the craft’s first solar encounter began to be downlinked to Earth on December 7. Some of the data, however, will not be downlinked until after the second solar encounter in April 2019, due to the effect on radio transmissions of the relative positions of Parker Solar Probe, the sun and Earth.

Bottom line: NASA’s Parker Solar Probe has taken the first image, and other science data, from inside the sun’s atmosphere (corona). This is the closest that any human-made spacecraft has ever come to the sun so far, and it will get even closer in the months ahead. The data obtained will help scientists better understand how the sun behaves and how it affects other objects in the solar system – including Earth.