These 2 outbound comets are likely from another solar system 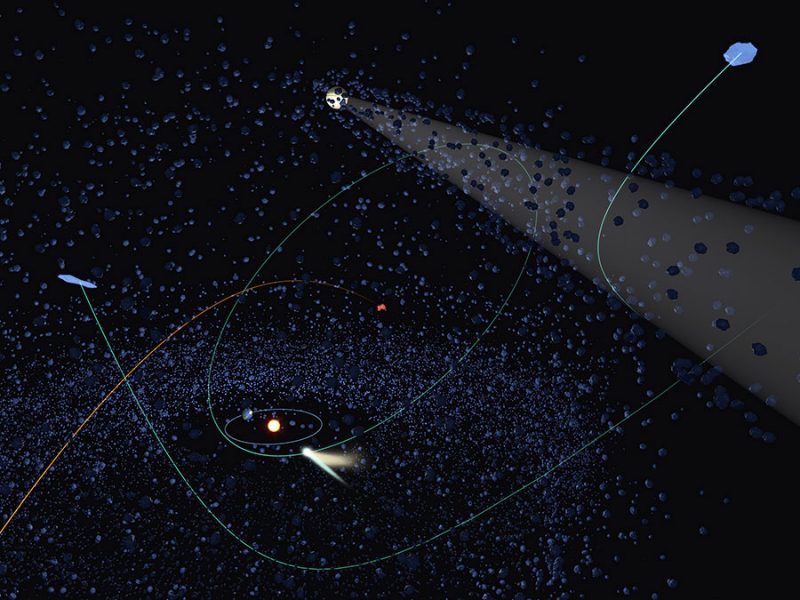 View larger. | Artist’s concept of long-orbit comets (blue). Researchers calculated how the typical paths of these comets may be perturbed by a passing gas-giant-sized object (white) and objects of interstellar origin (red). Image via NAOJ.

Astronomers at the National Astronomical Observatory of Japan (NAOJ) said on January 17, 2020, that – after an analysis of the paths of two comets heading out of our solar system forever – they’ve determined these comets likely originated from outside of the solar system. In other words, these astronomers said, these comets don’t come from our solar system’s own Oort Cloud. Arika Higuchi and Eiichiro Kokubo at NAOJ calculated the types of trajectories which would typically be expected in each scenario. The team then compared their calculations to observations of two other objects – 1I/’Oumuamua, discovered in 2017, and 2I/Borisov, discovered in 2019 – now categorized as the first and second-known interstellar objects.

They found that the interstellar origin scenario provides the better match for the paths of both of the comets they studied.

Their work appeared online in late 2019 in the journal Monthly Notices of the Royal Astronomical Society and will be printed in the journal’s February 2020 issue. Their statement explained:

Not all comets follow closed orbits around the sun. Some fly through the solar system at high speed before heading out to interstellar space, never to return. Although it is simple to calculate where these comets are going, determining where they came from is more difficult.

There are two possible scenarios. In the first scenario, a comet is originally in a stable orbit far from the sun, but gravitational interactions with a passing object pull the comet out of its orbit. The comet then falls into the inner solar system where it can be observed before being flung out into interstellar space.

In the second scenario, a comet originates someplace very far away, perhaps a different planetary system, and as it flies through interstellar space, by random chance it passes through the solar system once before continuing on its way.

Thus Higuchi and Kokubo are saying that the comets they studied are similar to the object 2I/Borisov, which has also been determined to be an interstellar comet.

The team also showed that it’s possible for gas-giant-sized objects passing close to our solar system to destabilize long-orbit comets and set them on paths similar to the paths of these two objects. Their statement said:

Survey observations have not uncovered any gas-giant-sized bodies which can be linked to these two outbound objects, but further study, both theoretical and observational, of small interstellar objects is needed to better determine the origins of these objects.

Bottom line: Astronomers in Japan calculated the orbits of two hyperbolic comets – that is, comets known to be on a path that will take them out of the solar system forever – and determined these comets likely originated outside of the solar system.