Is ‘Oumuamua a frozen piece of an exoPluto?

A new theory about ‘Oumuamua suggests the weird object that passed through our solar system in 2017 was a remnant of a Pluto-like world from another solar system. As one scientist said, “‘Oumuamua may be the first piece of an exoplanet brought to us.”

The discovery of ‘Oumuamua in 2017 ignited a firestorm of debate that continues today. From the shape of its orbit, astronomers knew it was the first known interstellar object to enter our solar system. But the unusual object wasn’t like any asteroid or comet seen in our solar system. So … what was it? Numerous theories have been proposed to explain it. Its weirdness even prompted some to suggest it might be artificial, a spacecraft or other piece of alien technology passing through our solar system. In mid-March, 2021, two scientists said they’ve solved the mystery. They said ‘Oumuamua is a remnant of a Pluto-like planet – once part of another solar system – now drifting through space.

Steven Desch and Alan Jackson – both of Arizona State University – published their peer-reviewed findings in two new papers, part I and part II, in the Journal of Geophysical Research: Planets on March 16, 2021.

From the first paper:

1I/‘Oumuamua is very strange, and it is hard to explain where it came from. We looked at several different ices and the push they would give ‘Oumuamua as they evaporated. We found that the best ice is nitrogen (N2), which would explain many of the things we know about it. ‘Oumuamua was small, about half as long as a city block and only as thick as a three-story building, but it was very shiny. The shininess is about the same as the surfaces of Pluto and Triton, which are also covered in nitrogen ice.

We suggest ‘Oumuamua was probably thrown out of a young star system about half a billion years ago. Bodies like ‘Oumuamua may allow us to see what the surfaces of a so far unknown type of exoplanet, ‘exo-Plutos,’ are made of … We show that orbital instabilities in which giant planets move around, as happened in our own outer solar system 4 billion years ago, could make and throw out large numbers of small pieces of nitrogen ice like ‘Oumuamua.

‘Oumuamua may be the first piece of an exoplanet brought to us. 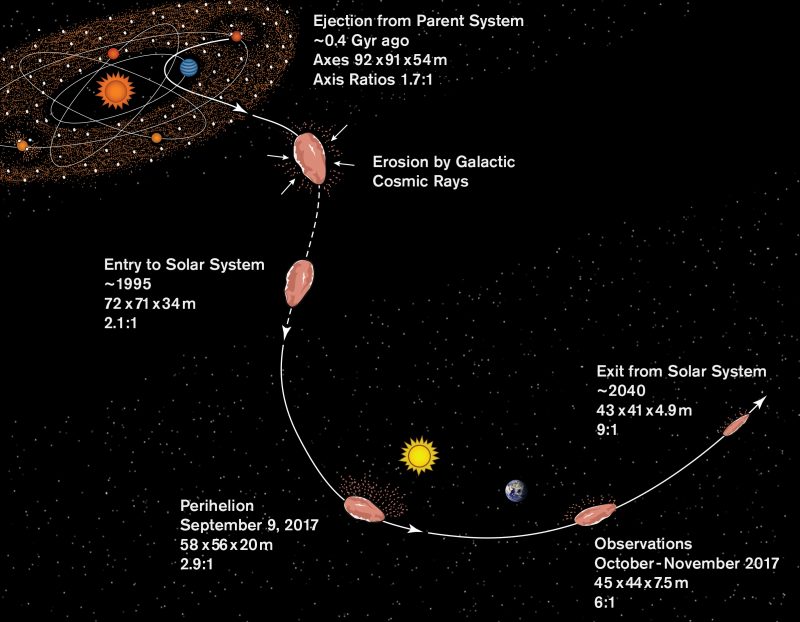 Schematic representation of a possible formation history (and a bit of future) for the first-known interstellar object to pass through our solar system. This object has been named ‘Oumuamua by earthly astronomers. Image via S. Selkirk/ ASU.

‘Oumuamua was similar to comets in some ways, yet notably different in others. As Desch said in a statement:

In many ways ‘Oumuamua resembled a comet, but it was peculiar enough in several ways that mystery surrounded its nature, and speculation ran rampant about what it was.

The odd characteristics of the object such as entering the solar system slower than would be expected, but exiting faster than a typical comet would do, made it difficult to explain ‘Oumuamua as an ordinary comet. There was no tail of gas seen when the object was closest to the sun. Updated analysis of the data also seemed to indicate it was more pancake-shaped than cigar-like as had first been thought.

Desch and Jackson came up with a new proposal to explain the unusual features of ‘Oumuamua: it was an object composed of different ices. They calculated how fast those ices would sublimate when ‘Oumuamua was closest to the sun. Then, they could estimate the mass, shape, speed and reflectivity of the object as it started to move out of the solar system again.

The researchers found that one type of ice in particular, nitrogen ice, could explain the anomalies observed. It’s already known that it can exist on rocky bodies, since it is abundant on the surface of Pluto. Desch said:

That was an exciting moment for us. We realized that a chunk of ice would be much more reflective than people were assuming, which meant it could be smaller. The same rocket effect would then give ‘Oumuamua a bigger push, bigger than comets usually experience. 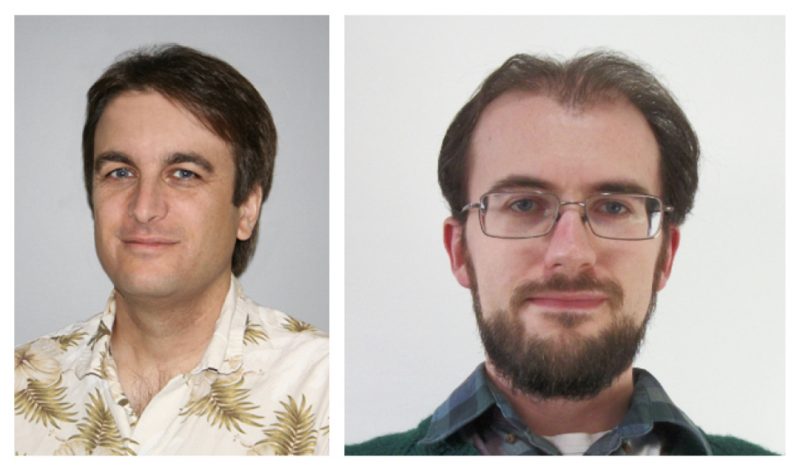 Steven Desch (left) and Alan Jackson of Arizona State University are the authors of the new study. Images via ASU.

We knew we had hit on the right idea when we completed the calculation for what albedo (how reflective the body is) would make the motion of ‘Oumuamua match the observations. That value came out as being the same as we observe on the surface of Pluto or Triton, bodies covered in nitrogen ice.

So could ‘Oumuamua really be a leftover fragment of a world something like Pluto, rich in nitrogen ice?

To help answer that, the researchers calculated how quickly similar chunks might have been knocked off Pluto and similar bodies in the early solar system. They also needed to know what the chances were of similar chunks reaching us from other solar systems. Was it common or rare? They concluded that the object was most likely knocked off the original larger body about half a billion years ago, and nitrogen ice would also explain its shape. According to Jackson:

It was likely knocked off the surface by an impact about half a billion years ago and thrown out of its parent system. Being made of frozen nitrogen also explains the unusual shape of ‘Oumuamua. As the outer layers of nitrogen ice evaporated, the shape of the body would have become progressively more flattened, just like a bar of soap does as the outer layers get rubbed off through use. 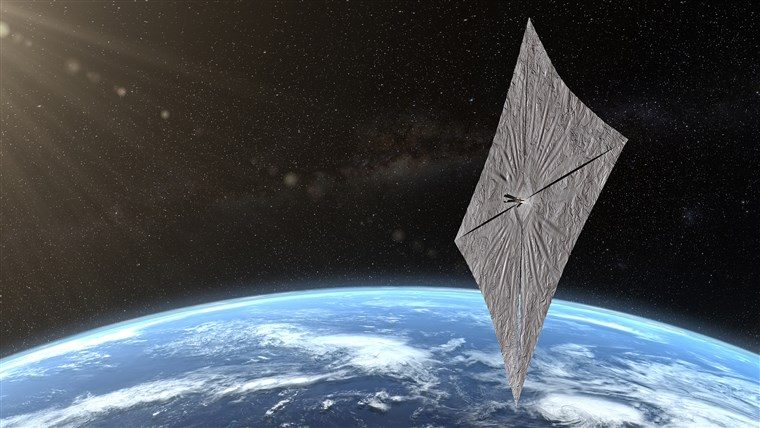 The most controversial theory about ‘Oumuamua is that it could be an artificial object, made by an alien civilization. This artist’s image depicts an alien lightsail spacecraft. Image via Josh Spradling/ The Planetary Society.

In this scenario, ‘Oumuamua was like a comet in that it was icy, with some of that ice sublimating near the sun, but it was composed of ice not seen in comets in our solar system. As Desch commented:

Previous theories about ‘Oumuamua have included it being a fragment of a super-Earth exoplanet, a cosmic dust bunny, and of course the highly debated alien lightsail.

Like other scientists, Desch and Jackson now hope that other similar objects will be found in the future, as Jackson noted:

It’s hoped that in a decade or so we can acquire statistics on what sorts of objects pass through the solar system, and if nitrogen ice chunks are rare or as common as we’ve calculated. Either way, we should be able to learn a lot about other solar systems, and whether they underwent the same sorts of collisional histories that ours did.

Unfortunately, observations of ‘Oumuamua at the time were limited, since it was already leaving the solar system when astronomers first spotted it. But scientists say that objects like ‘Oumuamua passing through our solar system should be fairly common, so hopefully more objects like it will be found that can be studied in more detail. 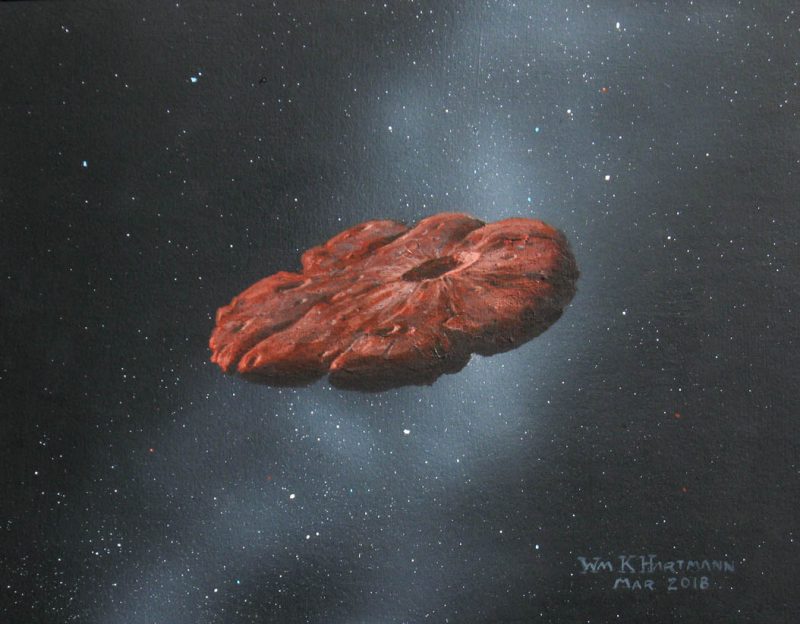 Artist’s concept of ‘Oumuamua as a pancake-shaped chunk of nitrogen ice. Image via William Hartmann/ ASU.

Bottom line: A new theory about ‘Oumuamua says the weird object was a pancake-shaped chunk of nitrogen ice, a remnant of a Pluto-like world from another solar system.

Source: 1I/‘Oumuamua as an N2 ice fragment of an exo-Pluto surface: I. Size and Compositional Constraints