After traveling through space for more than 2 years, NASA’s OSIRIS-REx spacecraft arrived on Monday at its destination, asteroid Bennu.

This series of images taken by the OSIRIS-REx spacecraft shows Bennu in one full rotation from a distance of around 50 miles (80 km). The spacecraft’s PolyCam camera obtained the thirty-six 2.2-millisecond frames over a period of 4 hours and 18 minutes. Image via NASA’s Goddard Space Flight Center/University of Arizona.

After traveling through space for more than two years and over two billion kilometers, NASA’s OSIRIS-REx spacecraft arrived at its destination, asteroid Bennu, today (Monday, December 3, 2018).

OSIRIS-REx (Origins, Spectral Interpretation, Resource Identification, Security-Regolith Explorer) launched in September 2016 and has been slowly approaching Bennu. OSIRIS-REx is NASA’s first mission to visit a near-Earth asteroid, survey the surface, collect a sample and deliver it back to Earth. The spacecraft will spend almost a year surveying the asteroid with the goal of selecting a location that is safe and scientifically interesting to collect the sample.

This picture shows the OSIRIS-REx spacecraft’s view of Bennu during the final phase of its journey to the asteroid. From August 17 through November 27, 2018, the spacecraft’s PolyCam camera imaged Bennu almost daily as the spacecraft traveled 1.4 million miles (2.2 million km) toward the asteroid. The final images were obtained from a distance of around 40 miles (65 km). During this period, OSIRIS-REx completed four maneuvers slowing the spacecraft’s velocity from approximately 1,100 mph (491 m/sec) to 0.10 mph (0.04 m/sec) relative to Bennu, which resulted in the slower approach speed at the end of the video. Image via NASA’s Goddard Space Flight Center/University of Arizona.

That asteroid sample is expected to return to Earth via free fall from space, until it reaches an altitude of 20.8 miles (33.5 km), when a first parachute will deploy. At 1.9 miles (3 km), the main parachute will be released, bringing the capsule with its precious cargo from Bennu in for a soft landing in the Utah desert on September 24, 2023.

Bottom line: After traveling through space for more than 2 years, NASA’s OSIRIS-REx spacecraft arrived December 3, 2018, at its destination, asteroid Bennu. 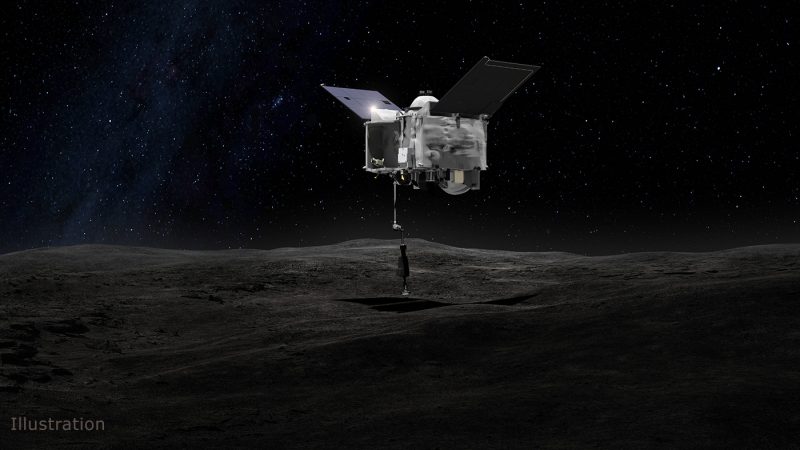 This artist’s concept shows the OSIRIS-REx spacecraft contacting the asteroid Bennu. The mission aims to return a sample of Bennu’s surface coating to Earth for study as well as return detailed information about the asteroid and its trajectory. Image via NASA’s Goddard Space Flight Center.