On Thursday, March 17, 2011, the MESSENGER spacecraft will become the first space probe to enter orbit around the innermost planet of our solar system, Mercury. 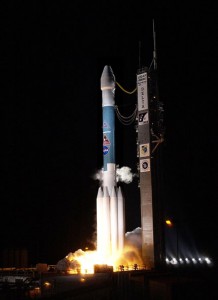 MESSENGER achieved Mercury orbit on March 17, 2011, at around 8:45 pm EDT (March 18, 2011, 12:45 am UTC). NASA seems to be updating MESSENGER’s Twitter page most frequently. Or try the MESSENGER updates webpage to find out about new developments.

The MESSENGER spacecraft, launched on August 3, 2004, will reach its final destination today, March 17, 2011. It will enter into orbit around Mercury to become the first-ever spacecraft to orbit the innermost world in our solar system.

MESSENGER has been on a 7.9-billion-kilometer (4.9-billion-mile) journey that required 15 loops around the sun, with several “gravity assists” from Earth, Venus, and Mercury.

Through it all, the spacecraft, built to withstand harsh conditions close to the sun, has performed very well, NASA space engineers say. MESSENGER will spend at least one Earth year making scientific observations using onboard instruments, transmitting the data daily to eagerly-awaiting planetary scientists. They – and we – have many questions, such as, why is Mercury so dense? What is the geologic history of the planet? What are the characteristics of Mercury’s magnetic field and magnetosphere? What is the structure of the planet’s interior? What are the unusual materials at its north and south poles, seen in Earth-based observations? And what kinds of processes are maintaining a thin envelope of gas around the planet? 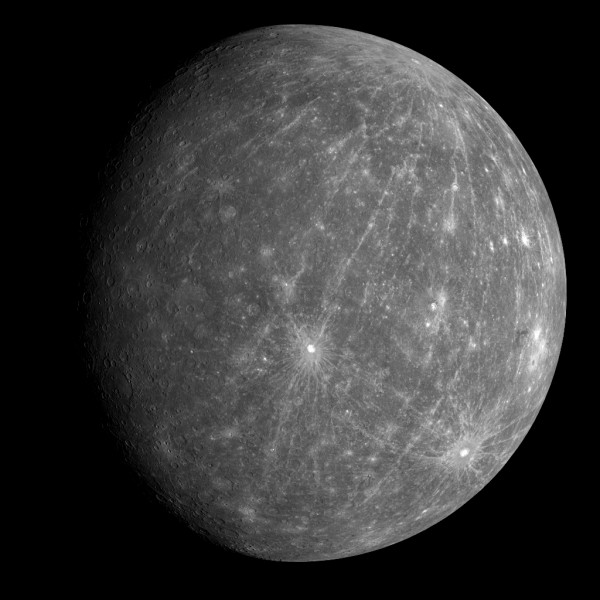 In Roman mythology, Mercury was known as the fleet-footed messenger of the gods. It seems fitting that a spacecraft that’s been chasing fast-moving Mercury for the past six and a half years is named MESSENGER. That name is also a cleverly-constructed acronym for MErcury Surface, Space ENvironment, GEochemistry, and Ranging. This light, compact spacecraft, only 4.75 x 4.2 x 6.1 feet in size, is loaded with an array of scientific instruments and is well-shielded to tolerate Mercury’s close proximity to the sun.

The first space probe to reach Mercury was the Mariner spacecraft that made three flybys in 1974 and 1975, obtaining images covering about 45% of the planet’s surface. MESSENGER, as part of its trajectory to its final parking spot in Mercury orbit, has already passed by Mercury three times (more about that later) and has imaged about 91% of Mercury’s surface. But that’s just a preview to the highly-detailed images and additional data that MESSENGER will collect if all goes well during its one-year science mission in orbit around Mercury. 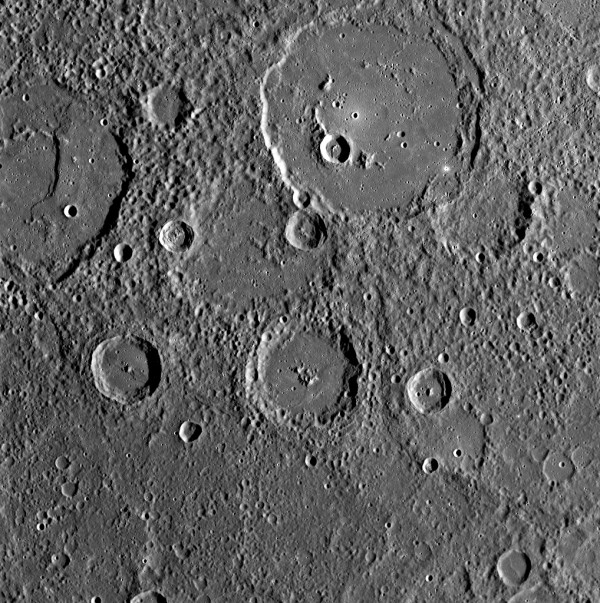 An image of craters on Mercury obtained during MESSENGER’s second flyby. The largest crater at the top of the image, named Polygnotus, has a diameter of 133 km (83 miles). Image Credit: NASA/Johns Hopkins University Applied Physics Laboratory/Carnegie Institution of Washington.

Mercury is the smallest planet in the solar system, about a third the size of Earth. It has a landscape reminiscent of the moon, with craters, cliffs, and plains. Curiously, it is also the densest of all the planets, likely due to a large iron core that makes up 60% of the planet’s mass. Still, it doesn’t have enough of a gravitational pull to hold on to an atmosphere, so it’s surrounded by an extremely thin envelope of gas called an exosphere.

Mercury is also the closest planet to the sun. Its highly elliptical orbit brings it as close as 46 million kilometers (29 million miles) to the sun, and at its farthest point, the planet is 70 million kilometers (43 million miles) away. Despite its close proximity to the sun, Mercury has the largest swings in surface temperature of any planet in the solar system: it can get as high as 700 degrees Kelvin (800 degrees Fahrenheit) at the equator when it’s closest to the sun. But at the north and south poles, where sunlight cannot reach the floor of deep craters, the temperature can drop as low as 90 degrees Kelvin (-300 degrees Fahrenheit).

The time-keeping rhythms of Mercury are a bit of an oddity. The planet takes just 88 days to make a revolution around the sun (one Mercury year). It takes 59 days to complete one rotation about its axis. However, because of its fast-paced revolution around the sun, one Mercury solar day – the time it takes for the sun to appear overhead from one day to the next – is 176 days! In other words, it takes two Mercury years to complete one solar Mercury day!

What will MESSENGER do on Mercury?
Scientists hope to answer several fundamental questions during the MESSENGER mission.

Why is Mercury so dense?
Mercury has a metal-rich core that makes up about 60% of its mass, a proportion much larger than that of Venus, Earth, and Mars. There are several theories to explain this, based on Mercury’s surface composition. MESSENGER’s spectrometers and cameras will take detailed surface measurements to determine the composition of Mercury’s rocks, and to map out the distribution of surface minerals. That information will help scientists figure out which theory best fits their observations. Or, as is often the case in science, surprise them with unexpected results.

What is the geologic history of Mercury?
Mariner and MESSENGER between them have photographed 91% of Mercury’s surface. But more detailed images are needed to better understand the global geologic history of the planet. At first glance, Mercury’s surface looks like that of Earth’s moon. But there is a lot we still don’t know about how those geological formations came to be. Features from past volcanic activity will tell a story about conditions early in the planet’s history. The craters provide a history of meteorite bombardments. Mercury’s unique tectonic activity has produced scarps – horizontal and vertical displacement of land masses at fault lines – that will help scientists understand how long it took for Mercury to cool down, and provide more information about the planet’s interior. 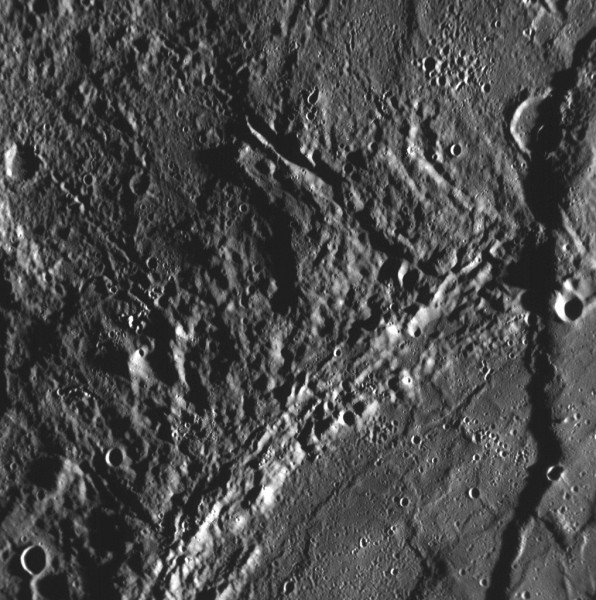 What is the structure of Mercury’s core?
Data will be collected to better understand Mercury’s interior. A laser altimeter aboard MESSENGER will obtain very accurate measurements between the spacecraft and surface features on the planet. That information, along with gravity measurements, will be used to determine Mercury’s libration. Libration is a slow wobble about a planet’s rotation axis as it revolves around the Sun. The size of that “wobble” will be used to determine the extent of the liquid core inside Mercury.

What are the unusual materials at Mercury’s poles?
As with Earth, temperatures are colder at Mercury’s poles. Some of the large craters there are deep enough that their floors have never been touched by sunlight, making them the coldest parts of the planet. Radar images from Earth show a reflective material on the floors of these craters. Could it be water ice, left by bombardments by comets and meteorites? Perhaps sulfur deposits from meteorites? Or it could be something less exotic, like naturally-occurring silicates? Previous MESSENGER flybys were unable to see the polar regions. But once in orbit, MESSENGER will be able to use its cameras and spectrometers to determine the composition of whatever’s coating the floors of those polar craters.

What volatiles are important at Mercury?
Mercury has an exosphere, an extremely thin envelope of gas, consisting of hydrogen, helium, oxygen, sodium, potassium, calcium, and, as discovered during a previous MESSENGER flyby, magnesium. Mercury’s gravitational force is too weak to hold on to a permanent atmosphere, so what’s replenishing these gases? Perhaps hydrogen and helium are captured from the solar wind. Other gases may come from meteorites and comets, or even from the surface rocks of Mercury. Does the composition of this thin layer of gases vary over time, and why? MESSENGER’s spectrometers will be used to measure and monitor the gases, perhaps providing scientists with enough data to trace the origin of these volatiles.

Getting there and the work ahead ….

The fastest way from Earth to Mercury would be a straight intercept. But without a tremendous amount of fuel to apply the brakes, the sun’s powerful gravitational force would make it impossible for a spacecraft to slow down enough to go into orbit around Mercury. However, there’s a nifty way to cruise to Mercury on a budget. It’s called a “gravity assist,” that is, using the gravity of a nearby planet to hitch a ride. Since its launch in 2004, MESSENGER has used three planets for six gravity assists: it passed close by Earth (August 2005), swung by Venus twice (October 2006 and June 2007), and raced past Mercury three times (January 2008, October 2008, and September 2009). On each of those occasions, the gravity of a planet was used to temper the spacecraft’s speed and redirect it on its circuitous and energy-efficient journey towards a graceful approach for insertion into Mercury orbit. MESSENGER also fired its onboard engines for five critical course adjustments called deep-space maneuvers (DSMs), each one completed just before a planetary gravity assist. Several smaller engine firings were also made along the way to fine-tune its velocity and direction toward Mercury orbital insertion. In all, by March 17th, 2011, MESSENGER will have logged 7.9 billion kilometers (4.9 billion miles), circling the Sun 15.2 times!

Click on the image below to view an animation of MESSENGER’s trajectory from Earth to Mercury orbit insertion. It will open a new window at the MESSENGER Mission Operations Center webpage. 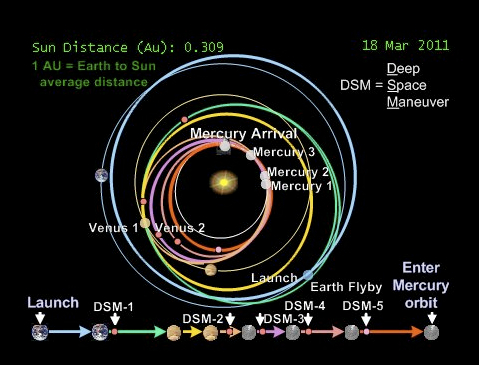 MESSENGER is scheduled to begin its critical maneuvers to go into Mercury orbit on March 17, 2011, at around 8:45 pm EDT (March 18, 2011, 12:45 am UTC). For the first two weeks after entering orbit, engineers and scientists will be busy checking all spacecraft systems to make sure they’re up and running. On March 23rd, the scientific instruments will be turned on and tested. If all goes well, MESSENGER will begin its science operations on April 4. Each orbit around Mercury will take about 12 hours. Every (Earth) day, the spacecraft will pause its science operations and turn its antenna towards Earth to transmit data for about 8 hours. That data will be intercepted by the Deep Space Network, a network of antennas that support interplanetary missions, located at Goldstone in the Mojave Desert in California, near Madrid in Spain, and close to Canberra, Australia. The data will be sent to the MESSENGER Mission Operations Center at the Johns Hopkins University Applied Physics Laboratory (APL) in Laurel, Maryland.

You can keep up with developments at the MESSENGER updates webpage, the Messenger Facebook page and by subscribing to their tweets. And be sure to visit the MESSENGER mission webpage for more information about Mercury and MESSENGER, including some really cool images and additional animations.

Click on the image below to view an animation showing MESSENGER’s Mercury orbital insertion. It will open a new window at the MESSENGER mission operations center webpage. 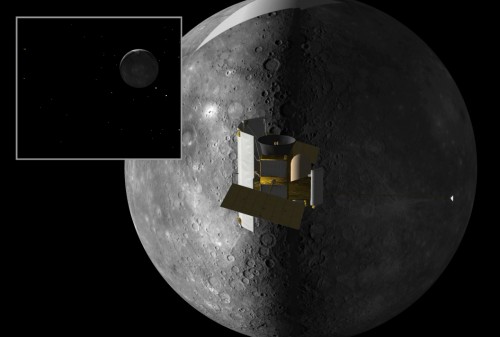 The MESSENGER spacecraft will become the first space probe to enter into an orbit around Mercury on March 17, 2011. Its name is an acronym for MErcury Surface, Space ENvironment, GEochemistry, and Ranging. The compact, well-shielded spacecraft has logged 7.9 billion kilometers (4.9 billion miles) with several “gravity assists” from Earth, Venus, and Mercury. During its one-year mission, onboard instruments will collect data that will help planetary scientists answer fundamental questions about Mercury’s internal structure and composition, geologic history, magnetic field, and thin exosphere. 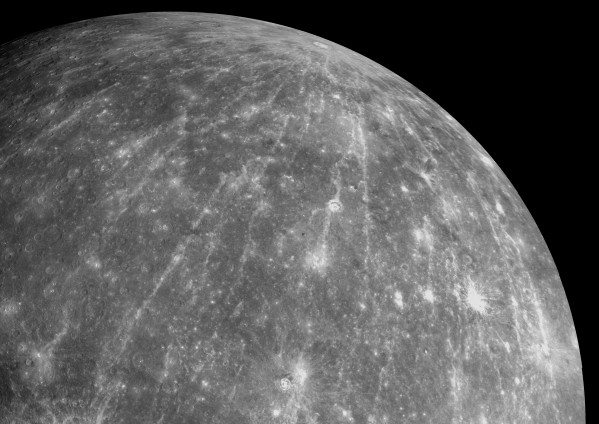 The impact crater Hokusai on Mercury has an impressive system of rays as long as a thousand kilometers (more than 600 miles). Image Credit: NASA/Johns Hopkins University Applied Physics Laboratory/Carnegie Institution of Washington.

Jupiter is your guide to Mercury in mid-March 2011

What’s true – and false – about the March 19 supermoon

Comet caught in act of diving into sun

What is the most distant human object from Earth?