China’s Chang’e 4 lander has produced fantastic, 1st-time surface views of the far side of the moon. Now a NASA orbiter has caught images of the landing site. 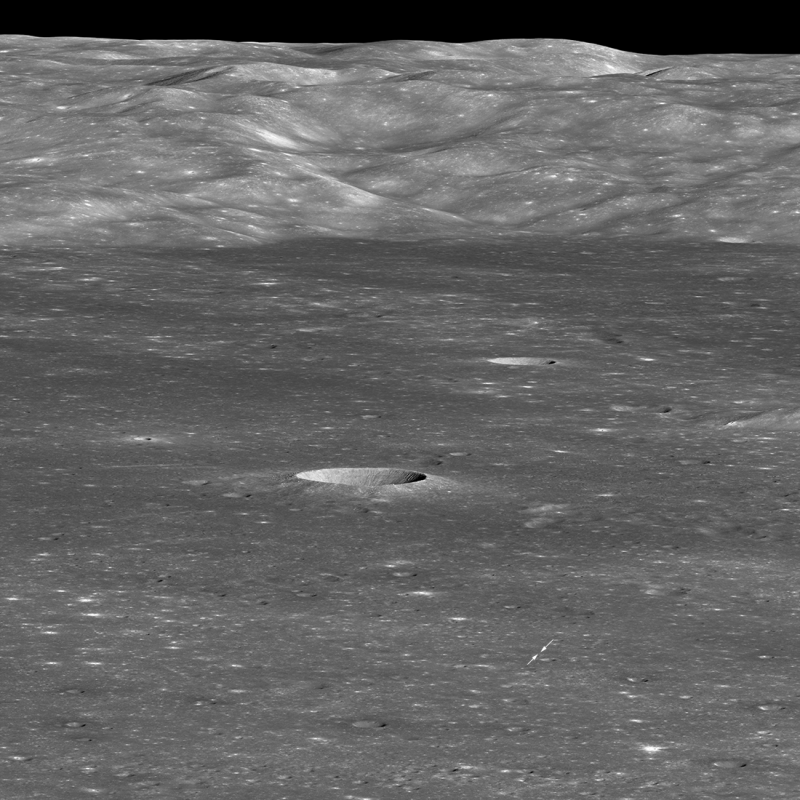 Image of the moon’s far side, taken January 30, 2019, via NASA’s Lunar Reconnaissance Orbiter (LRO). At the time of this image, LRO was 205 miles (330 km) east of the landing site. Thus the Chang’e 4 lander is only about two pixels across (bright spot between the two arrows), and the smaller Yutu-2 rover is not detectable. For a closer look, see the image below this. Image via LROC.

The first-ever successful landing on the far side of the moon took place just last month – January 3, 2019 – when the the Chinese National Space Administration (CNSA) safely set down its Chang’e 4 spacecraft. One month later, NASA’s Lunar Reconnaissance Orbiter (LRO) passed over the spot where the Chinese spacecraft and rover rested on the lunar surface. It rolled 70 degrees to the west to acquire the spectacular image above.

NASA released the LRO images on February 8, 2019. The first new image – shown above – was taken on January 30, 2019. It shows the landing site in an oblique limb-shot view, looking across the floor of Von Kármán crater. Only the lander, not the smaller rover (called Yutu-2), was visible in this image, since LRO was over 124 miles (200 km) from the area at the time. Even the lander was only a few pixels across.

Both the rover and lander are visible, however, in the second image taken the next day. The rover only shows as two tiny pixels, but it is there, as well as shadows from both the lander and rover. See the image below. 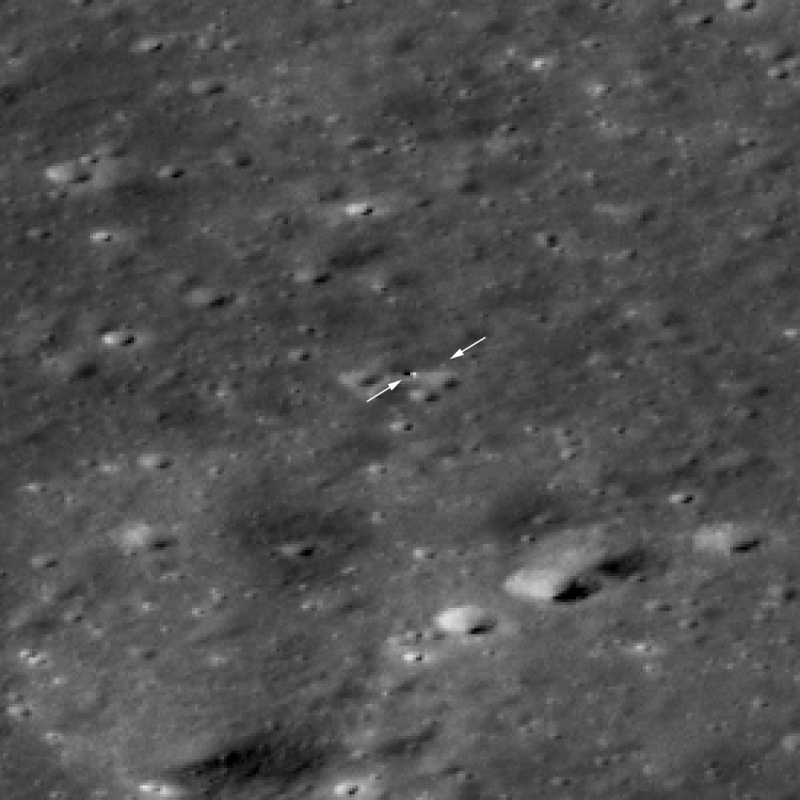 Both the Chang’e 4 lander and Yutu 2 rover are visible in this image, taken by the Lunar Reconnaissance Orbiter on January 31, 2019. Image via NASA/GSFC/Arizona State University. 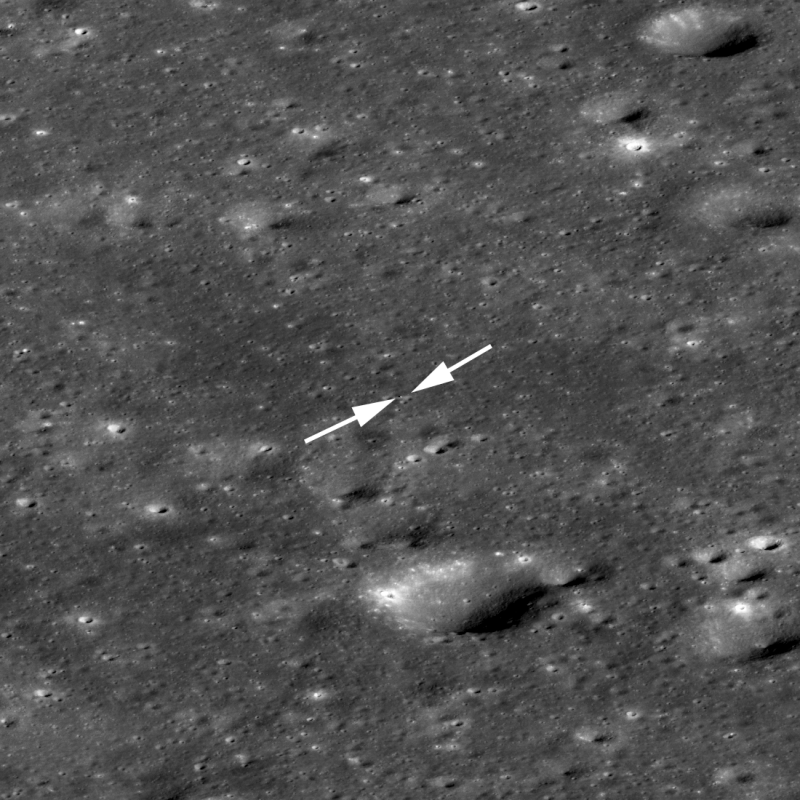 Wider view of the Chang’e 4 landing site from LRO. Image via NASA/GSFC/Arizona State University. To see all the images, go to LROC’s website.

The images were released at the website of the LROC, which stands for Lunar Reconnaissance Orbiter Camera. It’s a system of three cameras mounted on the orbiter that capture high resolution black-and-white images – and moderate resolution multi-spectral images – of the moon’s surface.

Chang’e 4 itself launched on December 8, 2018. It entered lunar orbit four days later, where mission controllers spent 22 days testing the spacecraft’s systems, waiting for the sun to rise at the landing site. [On January 2-3, 2019] Chang’e 4 successfully de-orbited and landed. 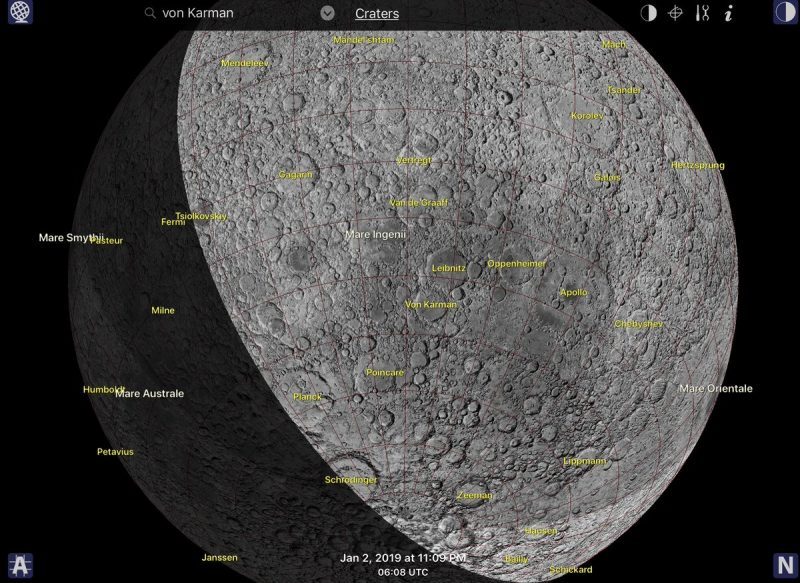 The Chinese Chang’e 4 lander touched down in the Von Kármán crater on the moon’s far side. This image is a simulation of the lunar far side, via Alan Dyer (@amazingskyguy on Twitter).

The landing site is within Von Kármán crater – about 110 miles (180 km) in diameter – on the far side of the moon. After the crater first formed, its floor was covered by eruptions of basaltic lava, similar to the eruptions in Hawaii last summer. Scientists are wondering those basaltic rocks are any different from the basaltic rocks on the near near of the moon. Chang’e 4 should be able to help answer that question.

Since the crater is so large, it contains many much smaller craters inside it. Most of those are less than 660 feet (200 meters) in diameter, dating back more than 3 billion years. Interestingly, because of the high density of small craters, when a new crater would form, it would not increase the total number of crater much, if at all, since any new crater would tend to erase an older crater below it. 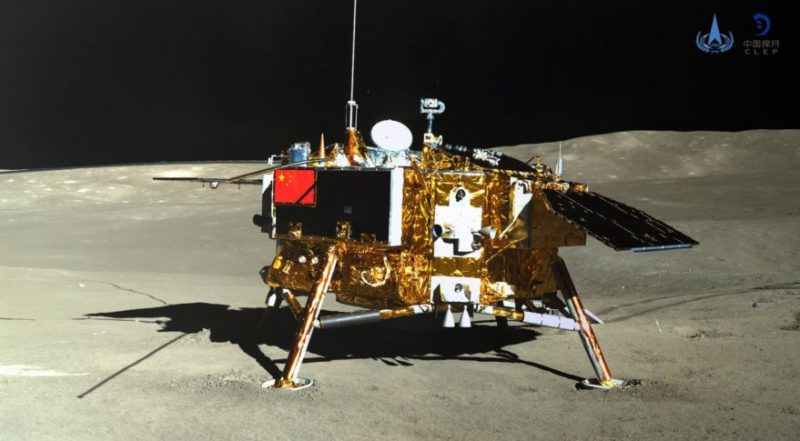 The Chang’e 4 lander, photographed by the Yutu 2 rover on the far side of the moon. Image via CNSA/CLEP. 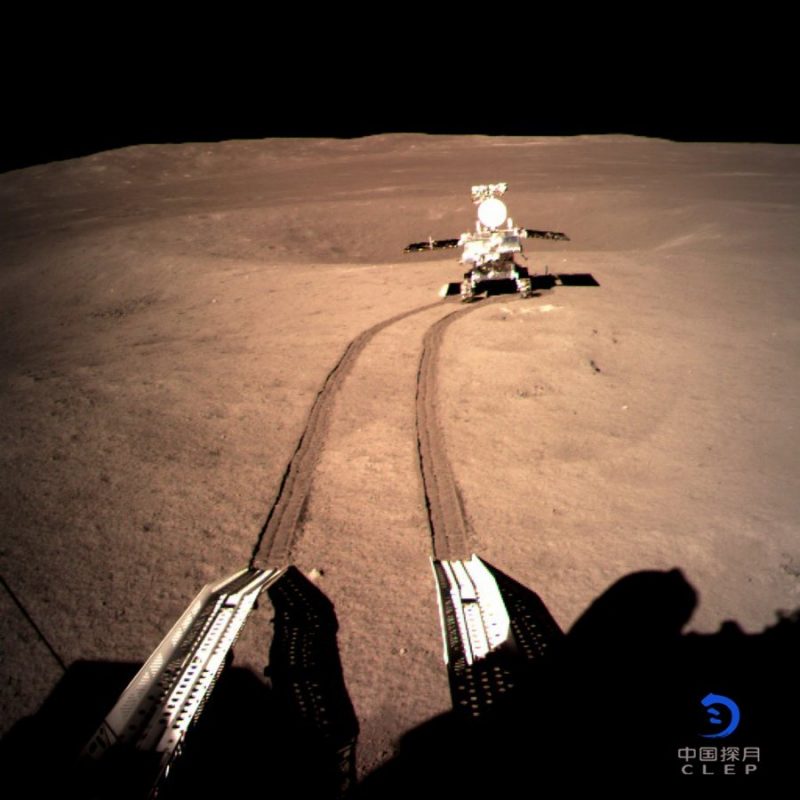 The Yutu 2 rover, shortly after deployment. Image via CNSA/CLEP. 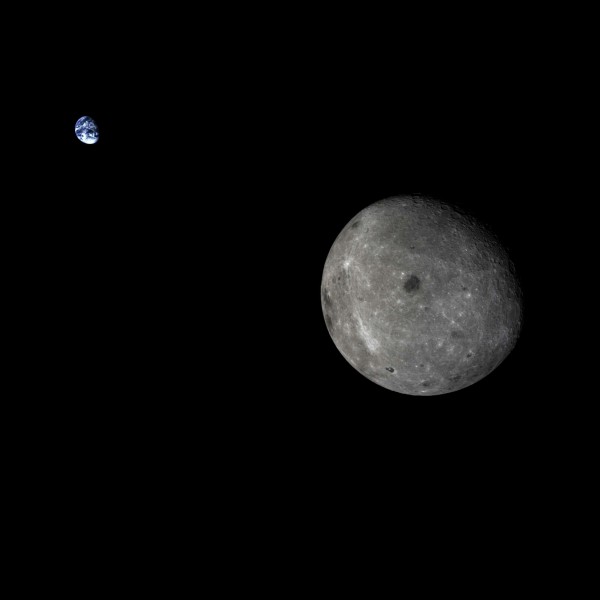 View of Earth and the far side of the moon on October 28, 2014, from the earlier Chang’e 5 test vehicle mission. Image via CNSA.

It’s also thought that some of the moon’s mantle – the layer just beneath the crust – may even have been exposed when Von Kármán crater formed.

The Yutu 2 rover was deployed about 12 hours after the landing of Chang’e 4. A few days later, the rover entered standby mode – i.e. “took a nap” – to protect itself from temperatures reaching close to 200 degrees Celsius. It later woke up again and continued its study of the landing area.

Bottom line: We’ve seen the fantastic views of the lunar surface from the Chang’e 4 landing site on the moon’s far side – for the first time ever – and now we also have the first high-resolution images of the landing area from lunar orbit, thanks to NASA’s Lunar Reconnaissance Orbiter.