An ancient asteroid impact was thought to have created moon’s Ocean of Storms. Now scientists think it formed via processes within the moon itself. 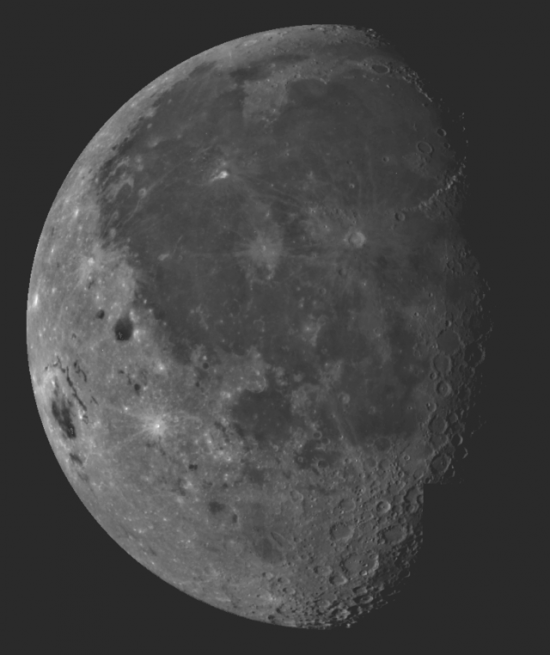 The Ocean of Storms (Oceanus Procellarum) on the moon is a vast lunar mare on the western edge of the moon’s near side. In this image, the dark Oceans of Storms is in the upper center, with the Sea of Rains (Mare Imbrium) above it and the smaller circular Sea of Moisture (Mare Humorum) below.

The Oceans of Storms on the moon (Oceanus Procellarum) is the only one of the lunar maria or seas to be called an ocean. That’s because it’s the largest of the maria, stretching more than 1,600 miles (2,500 km) across. Early theories about this part of the moon suggested it was the site of an ancient asteroid impact. Now scientists studying data from the Grail mission – which orbited the moon in 2011 and 2012 – believe they have found evidence that this region formed not in an asteroid impact, but instead via processes going on beneath the moon’s surface. The journal Nature published these findings on October 2, 2014.

These scientists are suggesting that a rift valley on the moon lies beneath the dark lava of the Ocean of Storms. On Earth, rift valleys are created by geologic activity, typically along the boundaries of tectonic plates, in places where be a fault, or crack in the land, or where areas of land are being pulled apart. On the moon, the rifts detected by GRAIL’s gravity data are buried beneath ancient lava on the moon’s nearside. The scientists say these lava-flooded rift valleys on the moon are unlike anything found anywhere else on the lunar surface and may at one time have resembled rift zones on Earth, Mars and Venus. Maria Zuber, principal investigator of NASA’s GRAIL mission, said in a press release:

We interpret the gravity anomalies discovered by GRAIL as part of the lunar magma plumbing system — the conduits that fed lava to the surface during ancient volcanic eruptions.

These scientists say this region might have formed as a result of churning deep in the interior of the moon that led to a high concentration of heat-producing radioactive elements in the crust and mantle on this part of the moon.

They formed their ideas by study the gravity data from GRAIL and noted a rectangular shape – a pattern of gravity anomalies – in the Ocean of Storms region. This rectangular pattern, with its angular corners and straight sides, contradicts the theory that Ocean of Storms is an ancient asteroid impact site, since such an impact would tend to create a circular basin. Their press release said:

Over time, the region would cool and contract, pulling away from its surroundings and creating fractures similar to the cracks that form in mud as it dries out, but on a much larger scale.

The study also noted a surprising similarity between the rectangular pattern of structures on the moon, and those surrounding the south polar region of Saturn’s icy moon Enceladus. Both patterns appear to be related to volcanic and tectonic processes operating on their respective worlds.

These scientists say the gravity data collected by GRAIL are:

… opening up a new chapter of lunar history, during which the moon was a more dynamic place than suggested by the cratered landscape that is visible to the unaided eye.

The twin GRAIL spacecraft – named Ebb and Flow – operated in a nearly circular orbit near the poles of the moon at an altitude of about 34 miles (55 kilometers) from September 2011 until their mission ended in December 2012. The distance between the twin probes changed slightly as they flew over areas of greater and lesser gravity caused by visible features, such as mountains and craters, and by masses hidden beneath the lunar surface. 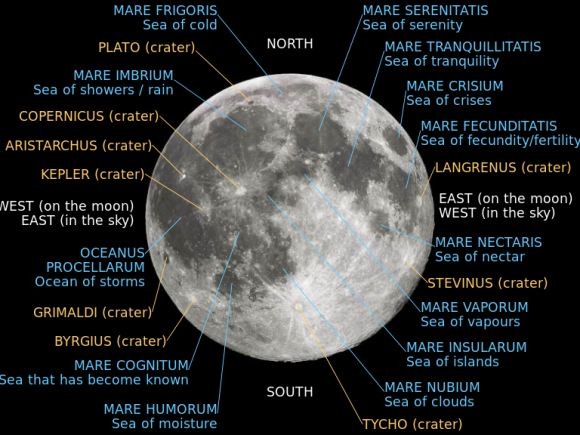 Named features on the moon.

Bottom line: The lunar Ocean of Storms (Oceanus Procellarum) was thought to be caused by an ancient asteroid impact. But scientists with the GRAIL mission to the moon say the gravity data collected by the twin GRAIL spacecraft have revealed this area as a place formed by internal processes within the moon itself. They say GRAIL’s data is revealing the moon, long considered a dead world, as a place that was more dynamic in the past.