How did Phobos get so groovy?

Mars’ moon Phobos is an enigmatic little world, with unusual grooves cutting across its surface. Now scientists have new evidence to support the theory that they were created by rolling boulders. 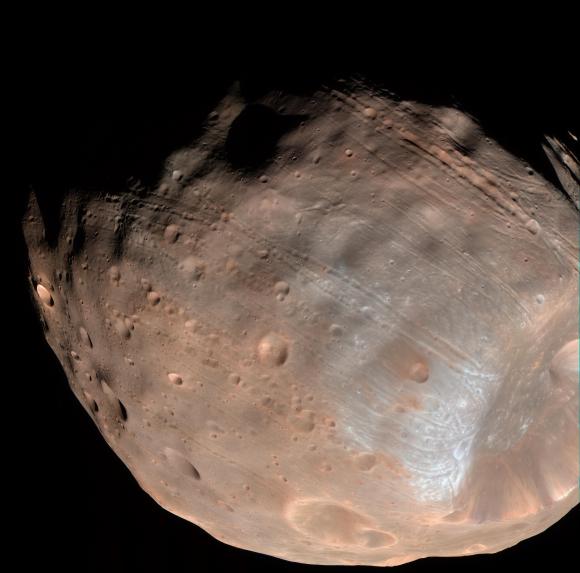 The tiny Martian moon Phobos, with its enigmatic grooves. Stickney crater is in the bottom right corner of the image. Image via NASA/JPL-Caltech/University of Arizona.

Phobos is a very groovy moon, literally. The surface of this moon of Mars is covered with odd linear grooves, and for a long time scientists have wondered how they formed. Now, a new study from researchers at Brown University might have solved this mystery. The researchers say that boulders rolling across Phobos’ surface probably created the markings. The new peer-reviewed findings were published in Planetary and Space Science on November 16, 2018.

The study suggests that the rolling boulders were sprayed across the surface of Phobos during the impact that created the large Stickney crater on one end of the oblong Martian moon. The team used computer models to simulate the movement of debris from the crater. As Ken Ramsley, a planetary science researcher at Brown University who led the work, explained:

These grooves are a distinctive feature of Phobos, and how they formed has been debated by planetary scientists for 40 years. We think this study is another step toward zeroing in on an explanation. 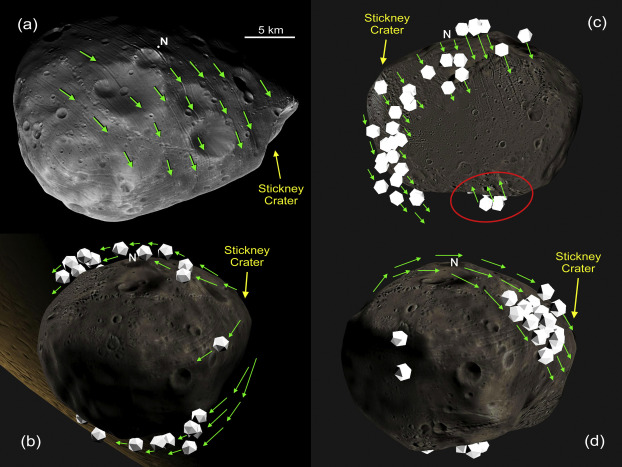 Computer simulation showing how boulders “flew over” one area of Phobos, leaving it devoid of grooves. Image via Ramsley et al./Brown University.

The grooves are a striking feature on this tiny moon of Mars, and were first seen by the Mariner and Viking missions in the 1970s. Another theory had been that the grooves were the result of structural failure in the moon, as Mars’ gravity is very slowly tearing the moon apart.

The idea of rolling boulders isn’t new, either. In the late 1970s, planetary scientists Lionel Wilson and Jim Head had also proposed the idea that bouncing, sliding and rolling boulders from Stickney might have created the grooves. Head is a co-author on the new paper.

The new theory sounds pretty straightforward although there are still some nagging questions. Most of the grooves radiate away from Stickney crater, but some do not. Some grooves also lie on top of other grooves, showing that they were created at different times. How does that reconcile with all the grooves being created by a single impact? Other grooves even run right through Stickney crater itself. The crater must have already been there when those grooves formed, otherwise the impact that created the crater would have wiped them out in that area. 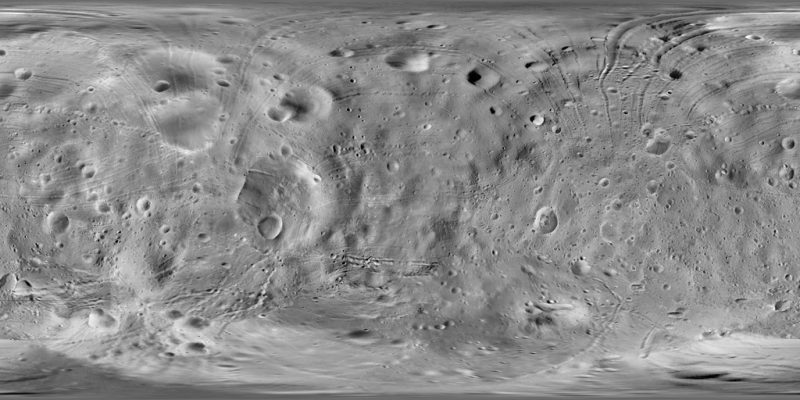 Global map of Phobos, taken by the Viking orbiter, showing the locations of all the grooves relative to other features. Image via Planetary Data System/Phil Stooke.

Despite those problems however, Ramsley found that the computer models re-created the groove patterns quite well, even though he didn’t know just what to expect:

The model is really just an experiment we run on a laptop. We put all the basic ingredients in, then we press the button and we see what happens.

The grooves tend to be parallel to each other, and according to the computer models, the boulders would have been ejected from the crater-forming impact in parallel paths as well. The boulders would also have kept rolling for much longer than on larger moons or planets, due to Phobos’ very weak gravity. If some boulders rolled all the way around the moon, that could explain why some grooves are not radially aligned to the crater. It could also explain the grooves formed on top of other grooves, since grooves that were created right after the impact were then crossed minutes to hours later by boulders completing their journeys around the moon, hence the time difference in their formation. Also, if some boulders did roll all the way around the moon, they could have rolled right across Stickney crater. 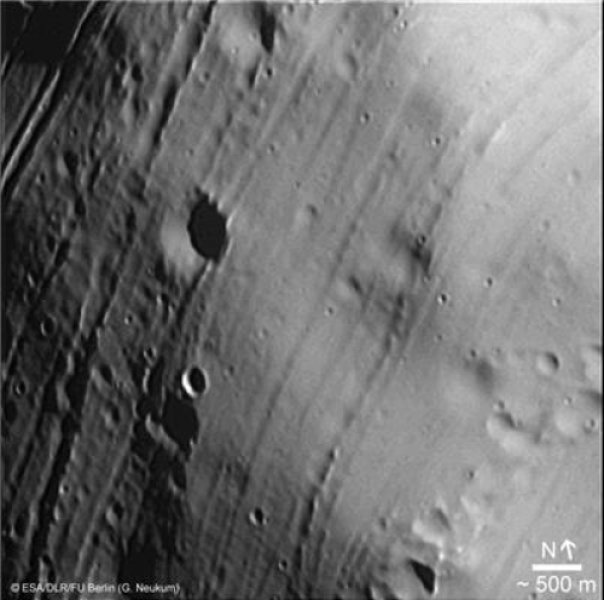 A closer view of some of the grooves from Mars Express. Image via ESA/DLR/FU Berlin (G. Neukum).

But what about the “bare spot” where there are no grooves? The computer simulations explain that also – the spot is a low-elevation area surrounded by a taller “lip.” The boulders would have hit that lip first, catapulting them over the region, and landing again on the other side. As Ramsley described it:

It’s like a ski jump. The boulders keep going but suddenly there’s no ground under them. They end up doing this suborbital flight over this zone.

So it seems like all of the odd features can be explained by these computer models. As Ramsley noted:

We think this makes a pretty strong case that it was this rolling boulder model that accounts for most if not all the grooves on Phobos.

Bottom line: Mars’ moon Phobos is a very intriguing little world, with features that have perplexed scientists for decades. Now, thanks to advanced computer modeling from scientists at Brown University, we may finally know how this little world came to be so groovy.