Astronomers pushed the boundaries of what’s possible with the Hubble Space Telescope to see a galaxy at a time when the universe was only 3% of its current age. 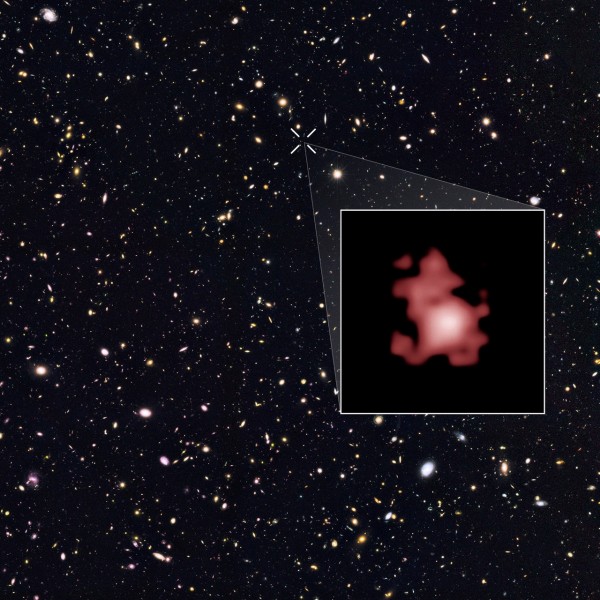 View larger. | Galaxy GN-z11, shown in the inset, currently holds the record for the most distant galaxy ever seen. The infant galaxy is blazing with bright, young, blue stars, but looks red in this image because its light has been stretched to longer spectral wavelengths by the expansion of the universe. Image via NASA, ESA, P. Oesch (Yale University), G. Brammer (STScI), P. van Dokkum (Yale University), and G. Illingworth (University of California, Santa Cruz).

Astronomers have a new record-holder for most distant galaxy yet seen. It’s GN-z11, and its discovery came from the Hubble Space Telescope’s Great Observatories Origins Deep Survey (GOODS). The survey field contains tens of thousands of galaxies stretching far back into time. Galaxy GN-z11 appears to us as it was 13.4 billion years ago, only 400 million years after the Big Bang. A combination of imaging from Hubble and the Spitzer Space Telescope shows that GN-z11 is 25 times smaller than our Milky Way galaxy. It has just one percent of our galaxy’s mass in stars. But GN-z11 is growing fast, forming stars at a rate about 20 times greater than our galaxy does today. The team’s findings will appear in the March 8, 2016, edition of The Astrophysical Journal.

Astronomers called this infant galaxy surprisingly bright. They’re speaking relatively, of course, the had to push the boundaries of what’s possible with the Hubble Space Telescope in order to see it. The new most-distant-known galaxy is located in our sky in the direction of the constellation of Ursa Major the Greater Bear, which contains the famous Big Dipper asterism. Astronomer Pascal Oesch of Yale, who led the research, said in a statement:

We’ve taken a major step back in time, beyond what we’d ever expected to be able to do with Hubble. We see GN-z11 at a time when the universe was only three percent of its current age.

Astronomers say they’re now closing in on the first galaxies that formed in the universe. According to their statement:

This measurement provides strong evidence that some unusual and unexpectedly bright galaxies found earlier in Hubble images are really at extraordinary distances. Previously, the team had estimated GN-z11’s distance by determining its color through imaging with Hubble and NASA’s Spitzer Space Telescope. Now, for the first time for a galaxy at such an extreme distance, the team used Hubble’s Wide Field Camera 3 to precisely measure the distance to GN-z11 spectroscopically by splitting the light into its component colors.

Astronomers measure large distances by determining the redshift of a galaxy. Galaxies show redshifts because our universe is expanding, with each galaxy receding from every other galaxy. As this happens, the light of galaxies appears to us to be stretched to longer, redder wavelengths as it travels through expanding space to reach our telescopes.

The greater the redshift, the farther the galaxy.

Its remote position puts GN-z11 at the beginning of what astronomers call the reionization era. In this early time in the universe, starlight from the first galaxies started to heat and lift the fog of cold hydrogen gas that filled the universe.

The previous record-holding galaxy was seen in the middle of this epoch, about 150 million years later. 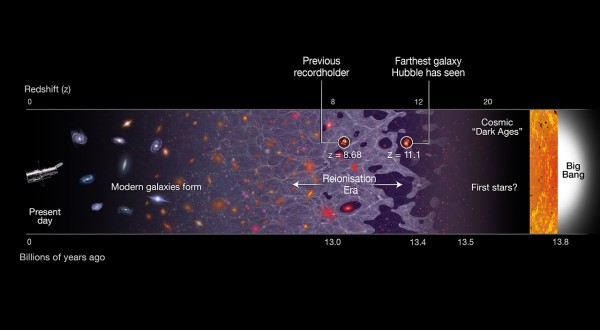 View larger. | This illustration shows a timeline of the universe, stretching from the present day (left) back to the Big Bang, 13.8 billion years ago (right). The newly discovered galaxy GN-z11 is the most distant galaxy discovered so far, at a redshift of 11.1. The previous record holder’s position is also identified.

Before astronomers determined the distance for GN-z11, the most distant galaxy measured spectroscopically had a redshift of 8.68 (13.2 billion years in the past). Now, the team has confirmed GN-z11 to be at a redshift of 11.1, nearly 200 million years closer to the time of the Big Bang.

Astronomers are looking forward to the launch of the James Webb Space Telescope in 2018. Pascal Oesch commented:

Hubble and Spitzer are already reaching into Webb territory.

They said this discovery also has important consequences for NASA’s planned Wide-Field Infrared Survey Telescope (WFIRST), which, they say:

… will have the ability to find thousands of such bright, very distant galaxies.

The animation below shows the location of galaxy GN-z11, currently the farthest galaxy ever seen. The video begins by locating the Big Dipper, then shows the constellation Ursa Major. It then zooms into the GOODS North field of galaxies, and ends with a Hubble image of the young galaxy.

Bottom line: GN-z11 is now the most distant known galaxy. It’s seen as it existed 13.4 billion years in the past, just 400 million years after the Big Bang, when the universe was only 3% of its present age.