The force is strong in neutron stars

Physicists at MIT analyzed data from earlier experiments in particle accelerators, in order to probe the workings of the strong nuclear force that operates inside atoms. Their work sheds light on this force – one of the 4 fundamental forces of nature – and also illuminates the structure of a neutron star’s core. 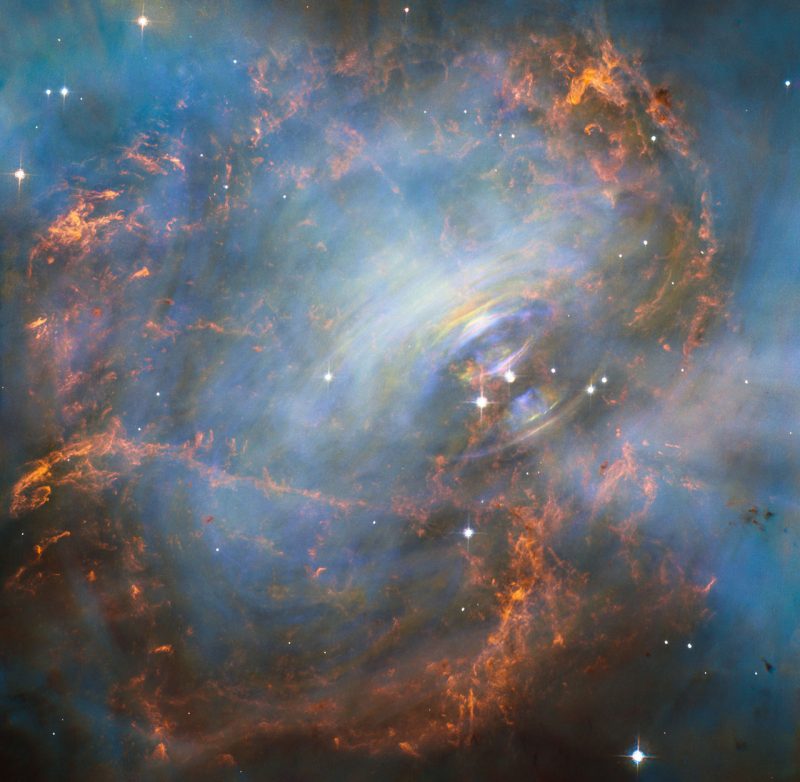 Of the four fundamental forces of nature, the one you likely know best is gravity. It and the electromagnetic force operate all around us and across vast space, on scales we humans can (sort of) comprehend. The other two fundamental forces of nature – the weak nuclear force and strong nuclear force – are much less familiar to us, in part because they operate on the scale of atoms. On February 26, 2020, the MIT News Office published an interesting post by Jennifer Chu about how physicists at MIT and elsewhere are working to characterize the strong nuclear force. Chu wrote that these scientsts now have characterized this force. They’ve learned for the first time how it works at extremely short distances. She wrote that they:

… performed an extensive data analysis on previous particle accelerator experiments, and found that as the distance between protons and neutrons [parts of atoms] becomes shorter, a surprising transition occurs in their interactions. Where at large distances, the strong nuclear force acts primarily to attract a proton to a neutron, at very short distances, the force becomes essentially indiscriminate: Interactions can occur not just to attract a proton to a neutron, but also to repel, or push apart pairs of neutrons.

Physicist Or Hen of MIT participated in the research, which was published in February in the peer-reviewed journal Nature. Hen commented:

This is the first very detailed look at what happens to the strong nuclear force at very short distances. This has huge implications, primarily for neutron stars and also for the understanding of nuclear systems as a whole.

In other words, he means that the new work has huge implications for understanding neutron stars … and atoms themselves, which make up everything around us.

Chu described the strong nuclear force as being:

… like an invisible subatomic glue that holds most ordinary matter together [at the scale of atoms].

Unlike with ordinary stars – whose atoms remain near one another due to the force of a star’s self-graviy – the strong nuclear force dominates in holding together neutron stars. Neutron stars aren’t made of ordinary matter. They’re made of matter that’s been crushed to an extreme density in supernova explosions. In neutron stars, the spaces between subatomic particles is much smaller than usual, so the strong force is strongly at play. Chu explained:

In atomic nuclei, most protons and neutrons are far enough apart that physicists can accurately predict their interactions. However, these predictions are challenged when the subatomic particles are so close as to be practically on top of each other.

While such ultrashort-distance interactions are rare in most matter on Earth, they define the cores of neutron stars and other extremely dense astrophysical objects.

Since scientists first began exploring nuclear physics, they have struggled to explain how the strong nuclear force plays out at such ultrashort distances.

… pummeling atoms with a huge number of extremely high-energy electrons, a fraction of which might have a chance of kicking out a pair of nucleons (protons or neutrons) moving at high momentum, an indication that the particles must be interacting at extremely short distances.

To do these experiments, you need insanely high-current particle accelerators. It’s only recently where we have the detector capability, and understand the processes well enough to do this type of work.

Hen and his colleagues looked for the particle interactions in an analysis of data previously collected by CLAS, a house-sized particle detector at the Thomas Jefferson National Accelerator Facility – commonly called Jefferson Lab or JLab – in Newport News, Virginia. Chu wrote:

… the JLab accelerator produces unprecedently high intensity and high-energy beams of electrons. The CLAS detector was operational from 1988 to 2012, and the results of those experiments have since been available for researchers to look through for other phenomena buried in the data.

In their new study, the researchers analyzed a trove of data, amounting to some quadrillion electrons hitting atomic nuclei in the CLAS detector. The electron beam was aimed at foils made from carbon, lead, aluminum, and iron, each with atoms of varying ratios of protons to neutrons. When an electron collides with a proton or neutron in an atom, the energy at which it scatters away is proportional to the energy and momentum of the corresponding nucleon.

If I know how hard I kicked something and how fast it came out, I can reconstruct the initial momentum of the thing that was kicked. 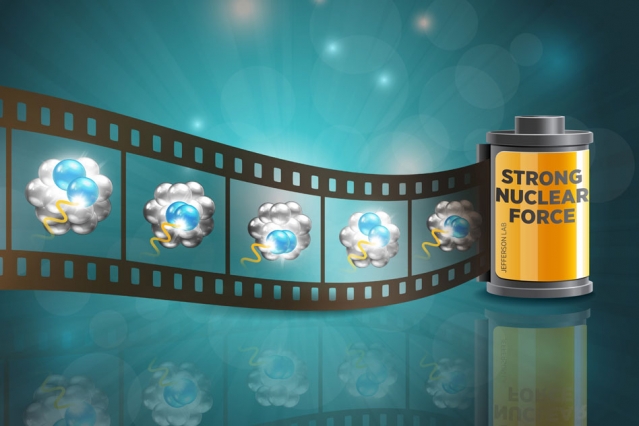 For the new study, the researchers analyzed past data from a particle accelerator. They compared “snapshots” of pairs of nucleons – protons and electrons – separated by various distances within atoms. Doing this let them observe a key transition in the behavior of the strong nuclear force – one of the 4 fundamental forces of nature – the glue that binds together the parts of atoms. Image via JLab/ MIT.

With this general approach, the team looked through the quadrillion electron collisions and managed to isolate and calculate the momentum of several hundred pairs of high-momentum nucleons. Hen likens these pairs to “neutron star droplets,” as their momentum, and their inferred distance between each other, is similar to the extremely dense conditions in the core of a neutron star. Chu explained:

They treated each isolated pair as a ‘snapshot’ and organized the several hundred snapshots along a momentum distribution. At the low end of this distribution, they observed a suppression of proton-proton pairs, indicating that the strong nuclear force acts mostly to attract protons to neutrons at intermediate high-momentum, and short distances.

Axel Schmidt, one of the paper’s co-authors, said:

This idea of a repulsive core in the strong nuclear force is something thrown around as this mythical thing that exists, but we don’t know how to get there, like this portal from another realm. And now we have data where this transition is staring us in the face, and that was really surprising.

Thus, thanks to this new data analysis, researchers have seen this transition in the strong nuclear force in action. They said the new knowledge can help future researchers understand the internal structure and workings of a neutron star.

The work also gives researchers basic insights into the how the strong nuclear force operates, and, by extension, how our physical reality works.

Want to understand the strong nuclear force better? Try the video below from Fermilab:

Source: Probing the core of the strong nuclear interaction