Exoplanets – worlds orbiting distant suns – are very, very far away. Astronomers are learning what some might look like, and what’s in their atmospheres. Soon – for the first time – a new telescope will be able to “see inside” some exoplanets.

So far, just over 4,000 exoplanets have been confirmed orbiting other stars, with many more waiting to be verified and discovered. Even though they are so far away, scientists have been able to start to obtain clues as to what some of them look like, whether they are large gas giants like Jupiter or smaller rocky worlds like Earth, and what is in their atmospheres. But now a new radio telescope in France will be able to “see inside” some of these exotic worlds by studying their magnetic fields. An active magnetic field would point to a planet having a magnetic dynamo deep inside it, a churning, liquid metallic core.

The telescope will be part of the Low Frequency Array (LOFAR), a European radio telescope array centered in the Netherlands. The new instrument itself, the New Extension in Nançay Upgrading LOFAR (NenuFAR), is located at the Nançay Radioastronomy Station in France. One of LOFAR’s main tasks is to locate radio signals from the earliest stars in the universe. But it will also look for evidence of magnetic fields around exoplanets. According to astrophysicist Evgenya Shkolnik of Arizona State University in Tempe:

It’s a probe into internal structure that there is no other way to get at right now.

It is expected that LOFAR should be able to make its first detection fairly soon, as Shkolnik noted:

It’s only a matter of time [before a detection], probably months. 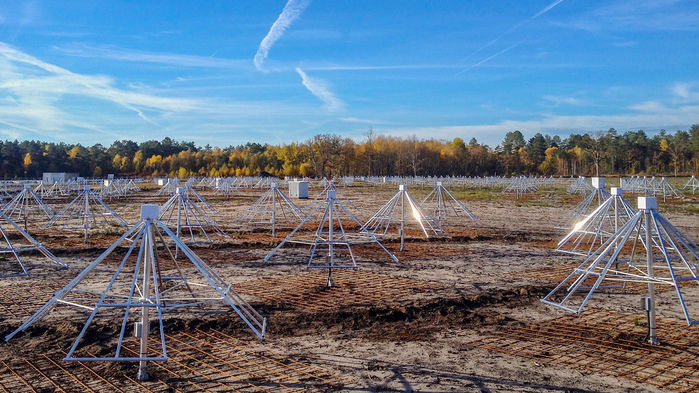 The NenuFAR telescope antennas in France, part of LOFAR. NenuFAR will be able to “see inside” hot Jupiter exoplanets and measure their magnetic fields. Image via Laurent Denis/Station De Radioastronomie De Nançay/Science.

Being able to detect and study the magnetic fields of exoplanets is important because those magnetic fields can provide clues to both how the planet formed and what its potential habitability is. Earth’s magnetic field, for example, protects the surface from deadly cosmic rays and charged particles from the sun. It also helps protect the atmosphere from being stripped away into space, as happened with Mars, which now only has a very weak magnetic field. As Jean-Mathias Griessmeier of the University of Orléans in France said:

This opens up an extra door to study exoplanets at a distance.

Hot Jupiters are gas giant planets that orbit very close to their stars. NenuFAR will be able to “see inside” some of them by studying their magnetic fields. Image via NASA/ESA/J.Bacon/Science Alert.

There are limits to what LOFAR and NenuFAR can do, however. The magnetic fields of most exoplanets would be too faint to detect, due to the immense distances. Even Jupiter’s would be difficult to find, if it were light-years away from us. But for one kind of exoplanet in particular – hot Jupiters – it would be an easier task. Hot Jupiters, gas giants that orbit very close to their stars, should have stronger magnetic fields, due to being buffeted by a stronger stellar wind. This would allow more electrons to be whipped up by the planet’s magnetosphere into a signal potentially a million times stronger than Jupiter’s.

NenuFAR will significantly increase LOFAR’s ability to detect these alien magnetic fields from hot Jupiters, as it is much more sensitive to lower frequencies, from below 85 megahertz (MHz) – the bottom of the FM radio band – down to 10 MHz, below which the ionosphere blocks any signals from space. Eventually, there will be nearly 2,000 of the pyramidal wire-frame antennas involved in the search, most contained within a 400-meter (1,300 feet) core. Magnetic fields from rocky planets like Earth will probably be too weak to be found with the current NenuFAR array however, as they would be below the 10 MHz limit. 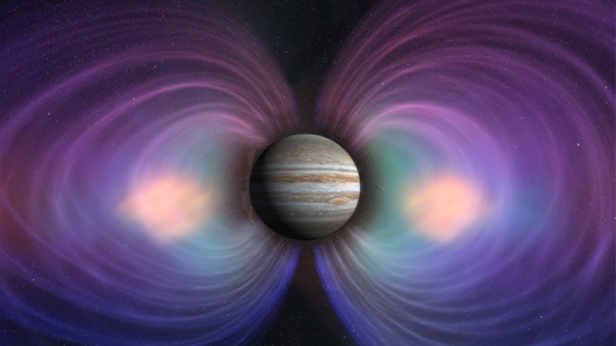 Jupiter has a powerful magnetic field – invisible to the human eye – that is probably similar to that of many other Jupiter-like exoplanets. Image via NASA/Space Answers.

It shouldn’t be too long before the first detections are made, perhaps just a matter of months as Shkolnik said, since NenuFAR has already been active since July. Currently, 60% of the array’s antennas are operational, and 80% of the hardware is expected to be in place by the end of the year, pending further funding. Right now, 80% of the €15 million needed to build and operate the array, from government funders, universities, and local authorities, has been secured.

NenuFAR will focus on a dozen or so known hot Jupiters, in days-long observing runs. It will be joined by other observatories, such as the Owens Valley Long Wavelength Array (OVRO-LWA) in California, which will have 352 antennas when it is completed next year. This array isn’t as sensitive as NenuFAR, however, and it will scan the entire sky instead of just looking at selected known hot Jupiters, in the hope that it will detect rare large bursts of signals generated by coronal mass ejections hitting a planet’s magnetic field. Detecting and analyzing the magnetic fields of rocky exoplanets like Earth will have to wait for similar telescopes based in space or on the far side of the moon in order to escape Earth’s ionosphere, which blocks radio emissions lower than 10 MHz.

NenuFAR, and similar future telescopic arrays that follow it, will provide another significant step in understanding how exoplanets form and evolve, and how similar – and different – they are to planets in our own solar system.