Asteroid 2012 TC4 is being used as a test of Earth’s global asteroid defense system. How to see it online.

In this flyby simulation, Earth is the blue dot. A geosynchronous satellite and its orbit are purple. The moon’s orbit is white. The asteroid’s path sweeps by on a green path. Watch how the orbit of 2012 TC4 gets deflected as it passes by Earth, turning darker as it dips below the ecliptic plane. Image Created with orbitsimulator.com, via Tony873004/AstroBob.

The Center for Near Earth Object Studies (CNEOS) at NASA’s Jet Propulsion Laboratory in Pasadena, California – and other astronomers and observatories around the globe – are watching a small asteroid, designated 2012 TC4, which will pass safely but close to Earth – within the moon’s orbit – on October 11-12, 2017. Amateur astronomers using small telescopes are already capturing its image. Asteroid scientists have a plan to utilize this asteroid as a test NASA’s network for global defense against asteroids. You can see the asteroid, too, by watching online.

Prior to this year, this object was observed for just one week in the year 2012. Astronomers tracked its orbit well enough to know it would return – and come close to Earth – but they didn’t have its orbit pinned down precisely. Last summer, experts were already saying they knew this space rock wouldn’t hit us, but they thought 2012 TC4 might give us a close shave, passing as close as 4,200 miles (6,800 km). In late July, though, astronomers recovered the space rock – picked it up telescopically again, after not seeing it for some years – and the new observations let them refine their knowledge of 2012 TC4’s orbit and better compute its closest distance to Earth later this month. 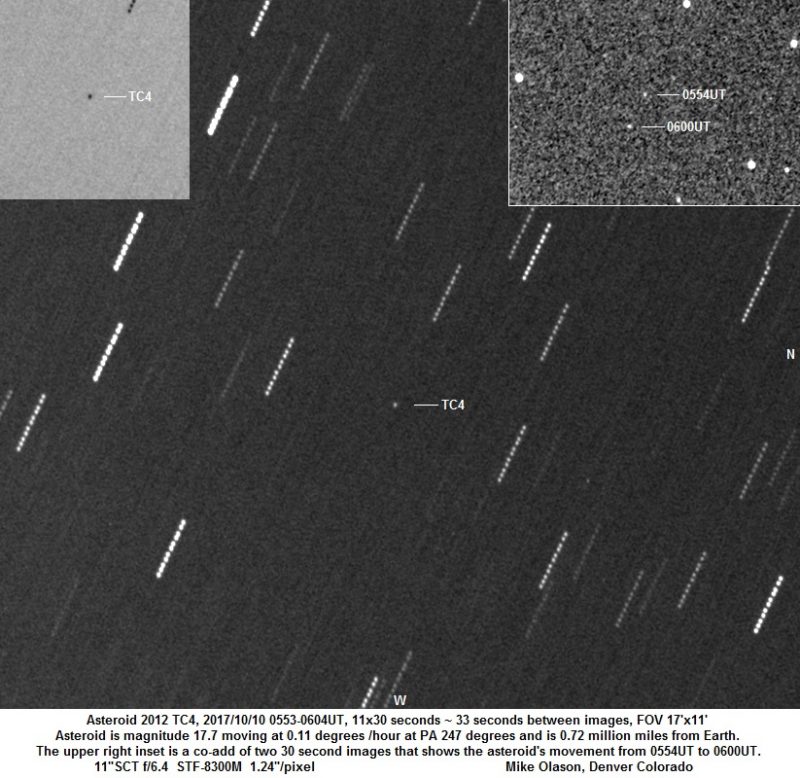 The asteroid is currently travelling at a speed of about 30,000 mph (nearly 50,000 kph). When astronomers first recovered it from the depths of space, it was exceedingly dim, but it has brightened a bit as it’s gotten closer.

Can you see asteroid 2012 TC4 as it sweeps past? Not with the eye alone, surely. But experienced observers with telescopes and charting software will be able to pick it up, and you can watch online as the asteroid passes. The Virtual Telescope Project in Italy will offer two online observing sessions, on October 11 and 12, in cooperation with Tenagra Observatories in Arizona. Click here to go to Virtual Telescope’s observing page for 2012 TC4.

This animation depicts the safe flyby of asteroid 2012 TC4 as it passes under Earth on October 11-12, 2017. It’ll pass fewer than 9,000 miles above the belt of communications satellites that ring the Earth in geosynchronous orbits, which are about 26,000 miles (40,000 km) above Earth. Image via NASA/ JPL-Caltech/ UANews.

Experienced backyard observers have a shot at the asteroid, too. To see it, you’ll need to make your own tracking map using sky charting software. AstroBob has instructions on how to do that at his blog. He wrote:

Observers in the Americas (especially South America) will get the best views as 2012 TC4 hurtles from Capricornus across Microscopium and into southern Sagittarius during early evening hours. [The locator map below], with stars to magnitude 8, shows the asteroid’s trajectory across the evening sky on the evening of October 11. Positions are shown every hour starting at 8:30 p.m. CDT. 2012 TC4 will be much fainter, around magnitude 13.

Find instructions for how to create your tracking map near the end of AstroBob’s October 3 blog post on 2012 TC4. 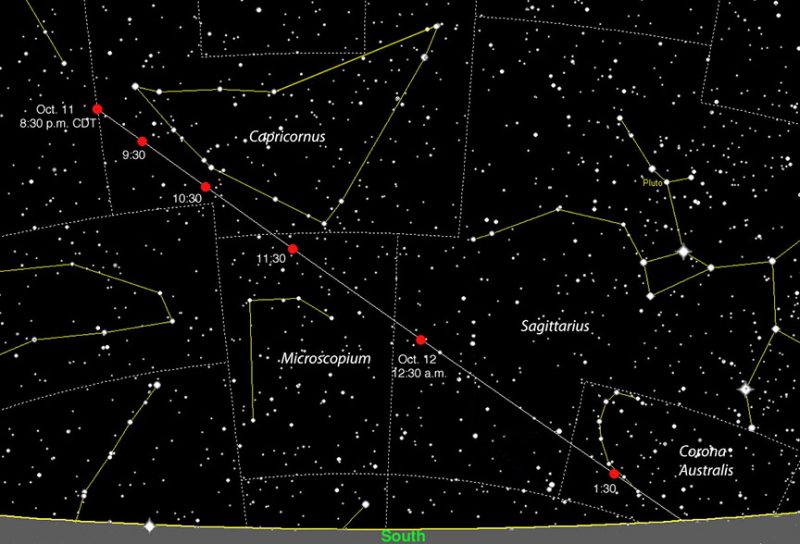 Chart showing the path across our sky of asteroid 2012 TC4, created with Chris Marriott’s SkyMap, via AstroBob.

Meanwhile, CNEOS is working with astronomers of the International Asteroid Warning Network on a plan to utilize asteroid 2012 TC4 in an exercise to test NASA’s network for planetary defense against asteroids. They’ve said they intend to test out their ability to recover, characterize and report on a potentially hazardous object approaching Earth.

Recover, in this sense, doesn’t mean recovering a sample from an asteroid; it means recovering the object via telescopes as it moves across the heavens, using tracking data from an earlier pass. The calculations on the October, 2017 pass of asteroid 2012 TC4, for example, were originally based on only seven days of tracking it, shortly after it was discovered in 2012. Then we lost the object again, in the depths of space, as it sped away from us. That’s an exceedingly common scenario for close-passing asteroids, which are, after all, just flying chunks (some more like flying mountains) of rock in space. They sweep past, then go their way.

These astronomers are trying out their planetary defense systems – a global protection against asteroids on a possible collision course with Earth – which they’ve been discussing for decades and developing over the last few years. 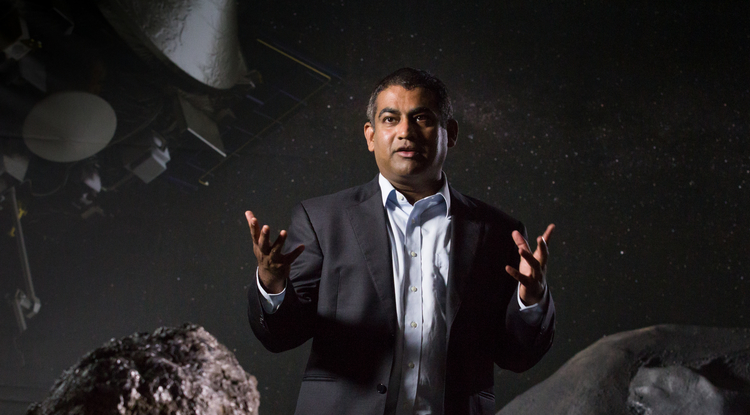 Vishnu Reddy of the UA Lunar Planetary Laboratory. “The question is: How prepared are we for the next cosmic threat?” Image via Bob Demers/ UANews.

Brightness measurements made during the week it was observed in 2012 gave an estimated size of 30 to 100 feet (10 to 30 meters) for asteroid 2012 TC4. That’s comparable to the meteor that caused a shock wave and explosion in Earth’s atmosphere, over the Russian city of Chelyabinsk, in February 2013, injuring 1,500 people and damaging over 7,000 buildings. The Chelyabinsk meteor, before it struck Earth’s atmosphere, is estimated to have been about 20 meters wide.

Astronomers also know that 2012 TC4 is an elongated and rapidly rotating asteroid.

And they know that asteroid 2012 TC4 has made many close approaches to Earth in the past. 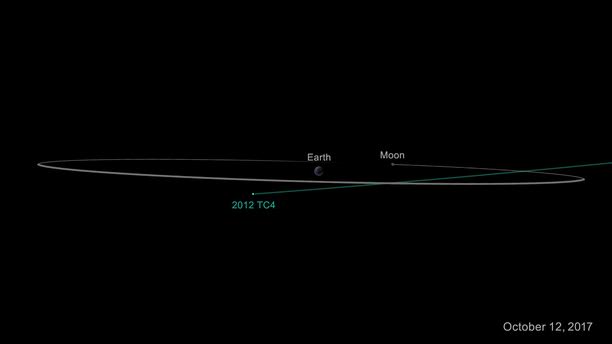 Illustration of a possible orbit for asteroid 2012 TC4, via NASA.

Bottom line: A small asteroid designated 2012 TC4 will pass Earth safely – but closely – on October 12, 2017. Experts are certain it won’t hit Earth. This summer, an international collaboration of telescopes is trying to reacquire the asteroid – that is, find it again in space – with the goal of precisely determining its orbit.

Via CNEOS and UANews.