Solar sails use faint pressure from sunlight to propel a spacecraft forward. A next-generation solar sail – called a diffractive solar sail – might be made of metamaterials, or smart materials. 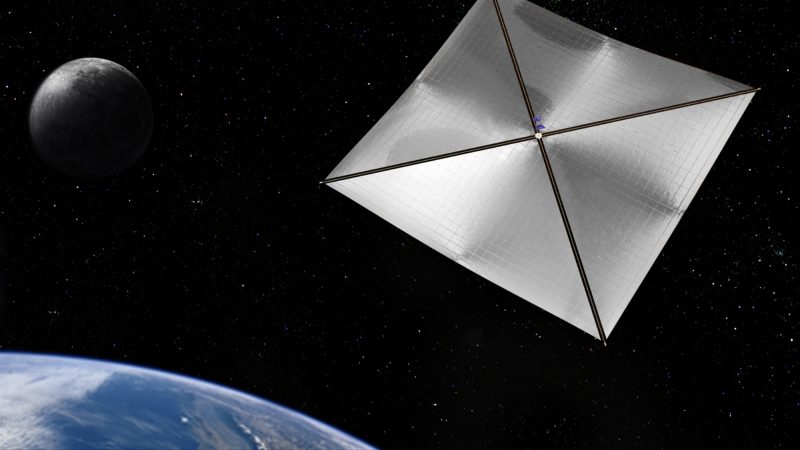 Artist’s concept of a solar sail leaving Earth. A new type of solar sail being developed could use metamaterials – meta is from a Greek word meaning beyond – to be stronger and harness more energy than previous designs. Image via NASA.

What’s the best way to travel throughout the solar system, or even beyond? Conventional rockets have, of course, been used for decades now, but what alternatives are there? One romantic possibility that’s already seen some encouraging testing results is solar sails. A solar sail spacecraft incorporates large, thin “sails” or membranes that use solar radiation pressure – a minute pressure from sunlight on everything it encounters – to propel the ship forward. The technique is reminiscent of the way in which old sailing ships used wind to travel on the oceans.

Now, NASA is funding a new concept for solar sails, one that uses diffractive sails instead of reflective sails, as has been the technique used so far. As announced by the Rochester Institute of Technology (RIT) on April 24, 2019, NASA is providing professor Grover Swartzlander a Phase II award through its NASA Innovative Advanced Concepts (NIAC) program to explore the feasibility of diffractive solar sails over the next two years. Awards under Phase II can be worth as much as $500,000 for two-year studies, compared to $125,000 for Phase I. As Swartzlander said:

We’re embarking on a new age of space travel that makes use of solar radiation pressure on large, thin sail membranes. The conventional idea for the last 100 years has been to use a reflective sail such as a metal coating on a thin polymer and you unfurl that in space, but you can get a force based on the law of diffraction as well. In comparison to a reflective sail, we think a diffractive sail could be more efficient and could withstand the heat of the sun better. These sails are transparent so they’re not going to absorb a lot of heat from the sun, and we won’t have the heat management problem as you do with a metallic surface. 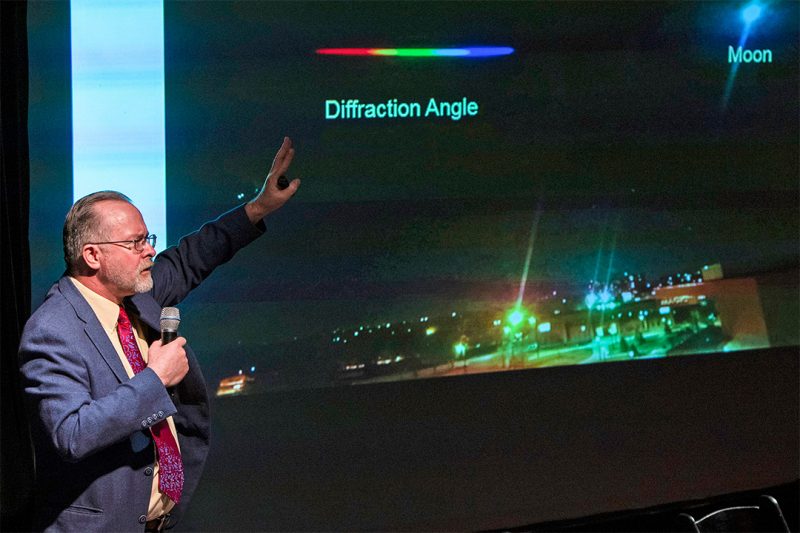 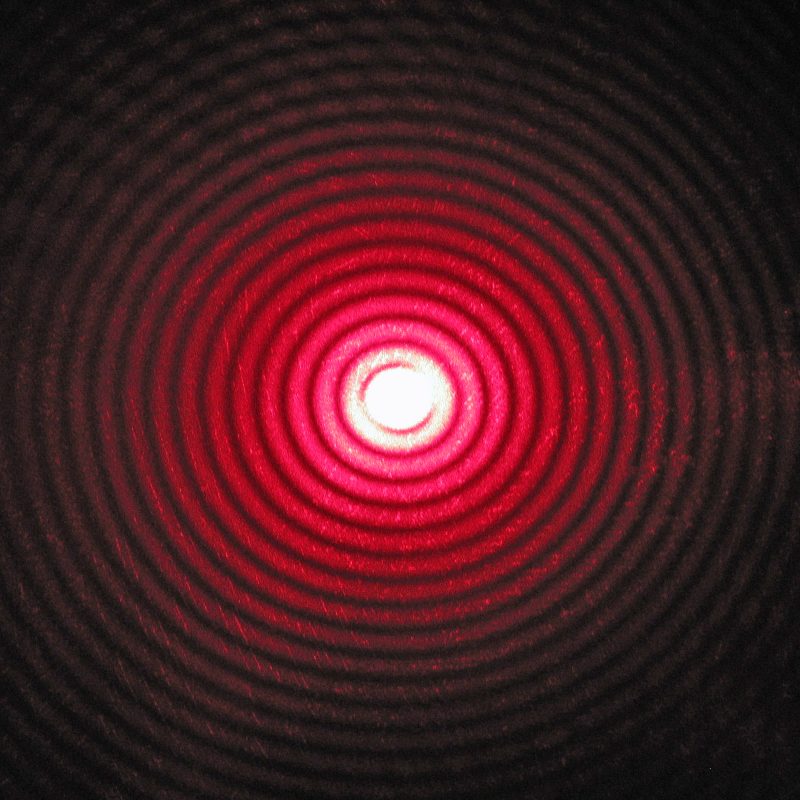 Diffraction pattern of a red laser beam made on a plate after passing through a small circular aperture in another plate. Image via Wikipedia/Wisky/CC BY-SA 3.0.

In diffraction, a wave (light or otherwise) is slightly bent around an object or obstacle – or through a hole called an aperture – instead of just bouncing off the object, as in reflection. One example is a common CD. The closely spaced grooves on the disk act as a diffraction grating that forms a rainbow effect that can be seen when looking at a disk. A hologram on a credit card is another example.

The solar sails that Swartzlander wants to develop would achieve a similar kind of result by using optical films made from metamaterials, also known as smart materials. These are materials engineered to have enhanced properties that are not found in the naturally occurring versions of those materials. Not only would this lower the mass of the sails, but the sails would use electro-optic laser beam steering instead of mechanical steering. This also would make the sails more efficient and less susceptible to breaking. On the solar sail, the metamaterials could be used to to trap solar energy within diffraction grating structures, which would allow much more energy to be harvested from the same amount of light. 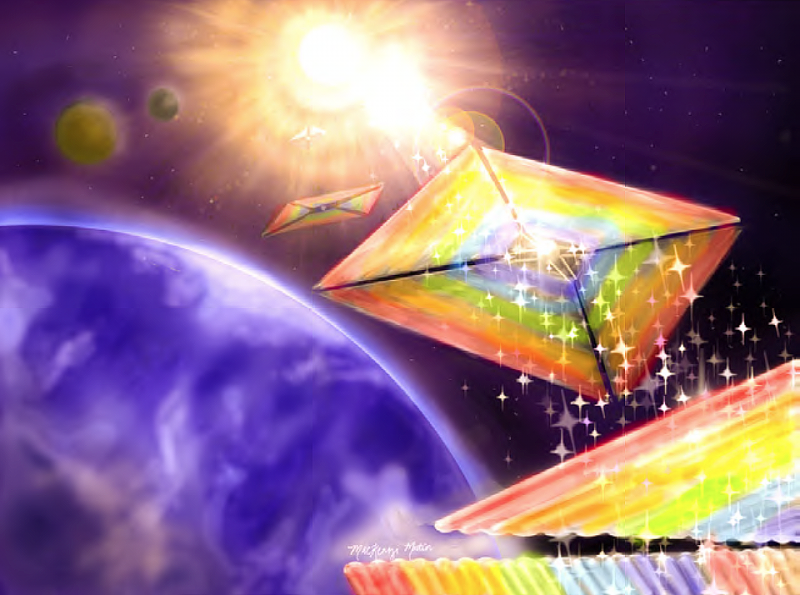 A more artistic rendition of a diffractive lightsail. Image via NASA.

Where could a spaceship travel, using solar sails? As an early step, Swartzlander envisions a fleet of them positioned around the sun in order to achieve a 360-degree view of our home star, something never done before. Since they could withstand the sun’s heat better than conventional solar sails, they could even be placed near the poles of the sun. Swartzlander is hoping for a demonstration mission within the next five years:

The National Academy of Sciences is continuously asking for more missions that will help understand the physics of the sun, and this could be an important part of that.

Right now, the Parker Solar Probe, a sophisticated but still “old school” kind of robotic probe, is making a series of orbits around the sun, getting closer with each orbit. It will approach the sun much closer than any other spacecraft before, but will still be limited as to just how close it can get.

This new kind of solar sail being developed could get even closer to the sun than the Parker Solar Probe and stay there longer, a unique opportunity to study our star in more detail than has ever been possible before.

The solar sail technology is just one of 18 new “potentially revolutionary space tech concepts” that NASA is investing in. Other concepts include the SmartSuit, an intelligent spacesuit design with soft-robotics, self-healing skin and data collection for extravehicular activity in extreme environments and Power for Interstellar Fly-by, a new type of power harvesting from ultra-miniature probes to enable interstellar missions. 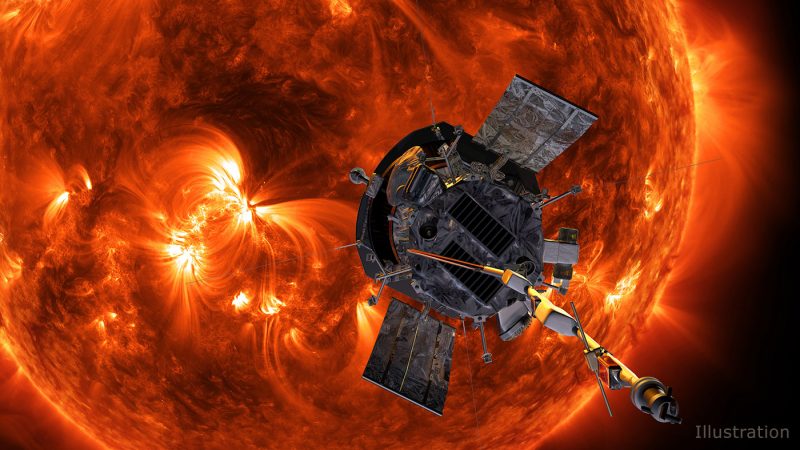 NASA’s Parker Solar Probe is currently making close flyby orbits of the sun, but the new type of solar sail envisioned could get even closer. Image via NASA/Johns Hopkins APL/Steve Gribben.

Our NIAC program nurtures visionary ideas that could transform future NASA missions by investing in revolutionary technologies. We look to America’s innovators to help us push the boundaries of space exploration with new technology.

NIAC concepts are cutting-edge ideas, although not too far out there. As Jason Derleth, NIAC program executive, said:

NIAC is about going to the edge of science fiction, but not over. We are supporting high impact technology concepts that could change how we explore within the solar system and beyond.

If these new solar sail technologies become reality, they could help revolutionize robotic exploration of planets, moons and other bodies in the solar system, and perhaps one day even take a bolder journey to another star.

Bottom line: The new diffractive technology being tested now could revolutionize solar sail probes, making them stronger and more efficient, even when hanging out close to the sun.

Via Rochester Institute of Technology