A statement from NASA’s Jet Propulsion Laboratory on Cassini mission success at Saturn, and on where solar system exploration will go from here. 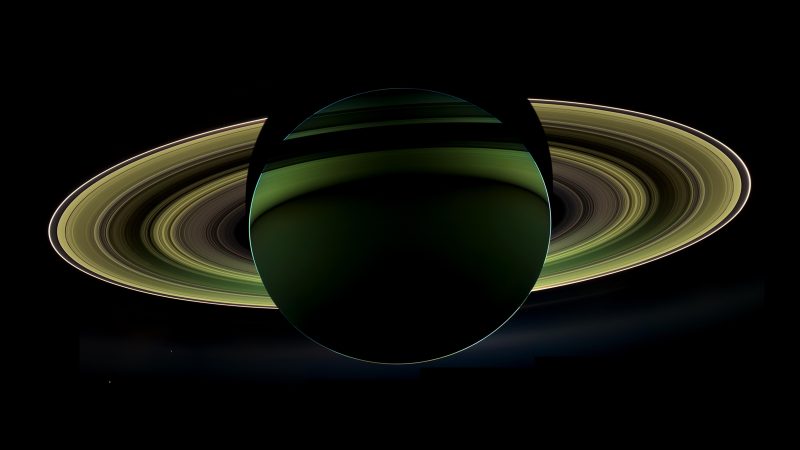 Saturn, backlit. Composite, made from images from Cassini while the craft was in Saturn’s shadow, on October 17, 2012, using infrared, red and violet spectral filters. Views like this one have been rare and precious, because the timing and spacecraft/planet/sun geometry has to be perfect. Previous to this image, Cassini captured a view like this in 2006. Via NASA JPL.

As the Cassini spacecraft nears the end of a long journey rich with scientific and technical accomplishments, it is already having a powerful influence on future exploration. In revealing that Saturn’s moon Enceladus has many of the ingredients needed for life, the mission has inspired a pivot to the exploration of ocean worlds that has been sweeping planetary science over the past decade. Thomas Zurbuchen, associate administrator for NASA’s Science Mission Directorate at Headquarters in Washington, said:

Cassini has transformed our thinking in so many ways, but especially with regard to surprising places in the solar system where life could potentially gain a foothold. Congratulations to the entire Cassini team!

Jupiter’s moon Europa has been a prime target for future exploration since NASA’s Galileo mission, in the late 1990s, found strong evidence for a salty global ocean of liquid water beneath its icy crust. But the more recent revelation that a much smaller moon like Enceladus could also have not only liquid water, but also chemical energy that could potentially power biology, was staggering.

Many lessons learned during Cassini’s mission are being applied to planning NASA’s Europa Clipper mission, planned for launch in the 2020s. Europa Clipper will fly by the icy ocean moon dozens of times to investigate its potential habitability, using an orbital tour design derived from the way Cassini has explored Saturn. The Europa Clipper mission will orbit the giant planet — Jupiter in this case — using gravitational assists from its large moons to maneuver the spacecraft into repeated close encounters with Europa. This is similar to the way Cassini’s tour designers used the gravity of Saturn’s moon Titan to continually shape their spacecraft’s course.

In addition, many engineers and scientists from Cassini are serving on Europa Clipper and helping to develop its science investigations. For example, several members of the Cassini Ion and Neutral Mass Spectrometer and Cosmic Dust Analyzer teams are developing extremely sensitive, next-generation versions of their instruments for flight on Europa Clipper. What Cassini has learned about flying through the plume of material spraying from Enceladus will help inform planning for Europa Clipper, should plume activity be confirmed on Europa.

Cassini also performed 127 close flybys of Saturn’s haze-enshrouded moon Titan, showing it to be a remarkably complex factory for organic chemicals — a natural laboratory for prebiotic chemistry. The mission investigated the cycling of liquid methane between clouds in its skies and great seas on its surface. By pulling back the veil on Titan, Cassini has ushered in a new era of extraterrestrial oceanography ­– plumbing the depths of alien seas — and delivered a fascinating example of earthlike processes occurring with chemistry and at temperatures markedly different from our home planet.

In the decades following Cassini, scientists hope to return to the Saturn system to follow up on the mission’s many discoveries. Mission concepts under consideration include spacecraft to drift on the methane seas of Titan and fly through the Enceladus plume to collect and analyze samples for signs of biology.

Atmospheric probes to all four of the outer planets have long been a priority for the science community, and the most recent Planetary Science Decadal Survey continues to support interest in sending such a mission to Saturn. By directly sampling Saturn’s upper atmosphere during its last orbits and final plunge, Cassini is laying the groundwork for an eventual Saturn atmosphere probe.

Farther out in the solar system, scientists have long had their eyes set on exploring Uranus and Neptune. So far, each of these worlds has been visited by only one brief spacecraft flyby (Voyager 2, in 1986 and 1989, respectively). Collectively, Uranus and Neptune are referred to as “ice giant” planets, because they contain large amounts of materials (like water, ammonia and methane) that form ices in the cold depths of the outer solar system. This makes them fundamentally different from the gas giant planets, Jupiter and Saturn, which are almost all hydrogen and helium, and the inner, rocky planets like Earth or Mars. It’s not clear exactly how and where the ice giants formed, why their magnetic fields are strangely oriented, and what drives geologic activity on some of their moons. These mysteries make them scientifically important, and this importance is enhanced by the discovery that many planets around other stars appear to be similar to our own ice giants.

A variety of potential mission concepts are discussed in a recently completed study, delivered to NASA in preparation for the next Decadal Survey — including orbiters, flybys and probes that would dive into Uranus’ atmosphere to study its composition. Future missions to the ice giants might explore those worlds using an approach similar to Cassini’s mission.