NASA’s MESSENGER spacecraft, first craft to orbit Mercury, has sent back an historic first image of Mercury as seen from orbit.

Yesterday – March 29, 2011 – NASA released an historic image of the sun’s innermost planet, Mercury – the first-ever image of Mercury taken from an orbiting spacecraft. The MESSENGER spacecraft, which has been orbiting Mercury since March 17, obtained this image of Mercury, which came in at 5:20 a.m. EDT yesterday. Over the next six hours, MESSENGER captured an additional 363 images, which are still being transmitted to the MESSENGER team on Earth. 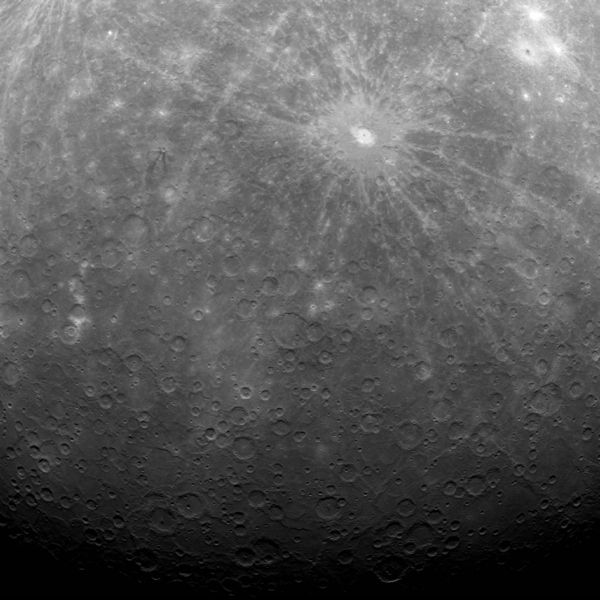 Today and through the weekend, MESSENGER is expected to capture another 1,185 images, with the goal of snapping 75,000 over the coming year.

This first-ever image of Mercury from orbit is not surprising or compelling to view. It is not very beautiful, relative to others we’ve seen, taken by spacecraft sweeping past Mercury and orbiting other worlds in our solar system. But it is a testimony to the difficulty of space engineering and the determination of NASA space engineers and scientists to place a craft in Mercury orbit. EarthSky’s Shireen Gonzaga tells the story of Mercury’s long journey to orbit insertion – and explains mission goals – here:

On March 17, first-ever craft in orbit around Mercury

The photo features a dominant crater in the top right corner known as Debussy and the smaller Matabei crater to the west. Craters on Mercury are named after deceased artists who have been recognized as historically significant for more than 50 years, according to NASA. Matabei got its name in July 2009 in honor of Japanese artist Iwasa Matabei, while Debussy was named in March 2010 after French composer Claude Debussy, who died in 1918.

The bottom of the image, meanwhile, is near Mercury’s south pole and includes a region not previously seen by spacecraft, NASA said.

Messenger successfully achieved orbit around Mercury at 9 p.m. EDT on March 17. It is the first time a spacecraft has been placed in orbit around the sun’s innermost world. MESSENGER’s instruments were activated on March 23 and the primary science phase will begin on April 4. Enjoy this first image of Mercury from orbit. There are many many more to come.