It’s more than 100 times Earth’s distance from our sun, and it takes 1,000 earthly years to orbit the sun once. Astronomers have labeled it 2018 VG18, but nicknamed it Farout! 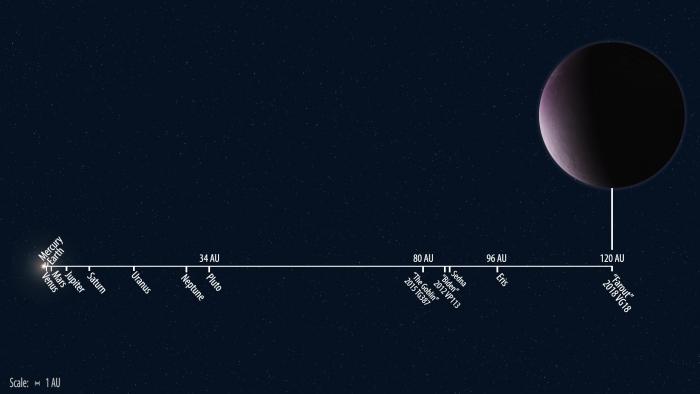 Scott S. Sheppard of the Carnegie Institution of Science, David Tholen of the University of Hawaii and Chad Trujillo of Northern Arizona University co-discovered the object. The discovery images of 2018 VG18 were taken at the Japanese Subaru 8-meter telescope located atop Mauna Kea in Hawaii on November 10, 2018. By tracking its movement through space, the astronomers can calculate that 2018 VG18 lies at a distance of about 120 astronomical units, or Earth-sun units. A statement from these astronomers explained:

The second-most-distant observed solar system object is Eris, at about 96 AU. Pluto is currently at about 34 AU, making 2018 VG18 more than 3 1/2 times more distant than the solar system’s most-famous dwarf planet.

2018 VG18 was discovered as part of the team’s continuing search for extremely distant solar system objects, including a suspected Planet X (with the X standing for unknown), also sometimes called Planet 9. 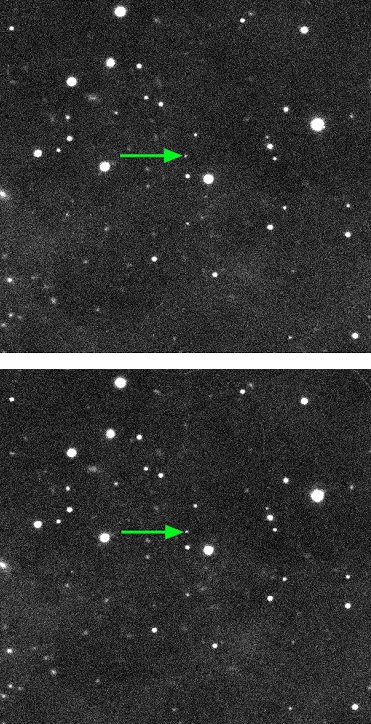 Discovery images of 2018 VG18 aka Farout, from the Subaru Telescope on November 10, 2018. Farout moves between the two discovery images while the background stars and galaxies do not move over the one hour between images. Image via Scott S. Sheppard/David Tholen/Carnegie Institution for Science.

Indeed, it’s the Planet 9 possibility that makes this new discovery of another small object in the outer solar system so tantalizing. After all, there must be many small outer solar system bodies, moving through space, unknown to earthly astronomers. Finding them is a big deal to the Planet 9 search because the orbits of these small, outer bodies are clues to Planet 9’s whereabouts, if, indeed, it exists.

This same group of astronomers – Sheppard, Tholen and Trujillo – recently discovered another small, outer body that’s been labeled 2015 TG387 and nicknamed The Goblin, because it was first seen near Halloween 2018. Their statement explained:

2015 TG387 and 2012 VP113 never get close enough to the solar system’s giant planets, like Neptune and Jupiter, to have significant gravitational interactions with them. This means that these extremely distant objects can be probes of what is happening in the solar system’s outer reaches.

The team doesn’t know 2018 VG18’s orbit very well yet, so they have not been able to determine if it shows signs of being shaped by Planet X.

How long will it take to learn more about 2018 VG18’s orbit? Years! That’s because 2018 VG18 is so distant. Remember your Astronomy 101? The more distant the object from our sun, the slower it moves in orbit around the sun. As the most distant object yet found in our solar system, 2018 VG18 has the distinction of being slower-moving than any other observed solar system object. So, Sheppard explained:

… it will take a few years to fully determine its orbit. But it was found in a similar location on the sky to the other known extreme solar system objects, suggesting it might have the same type of orbit that most of them do.

All that we currently know about 2018 VG18 is its extreme distance from the sun, its approximate diameter, and its color. Because 2018 VG18 is so distant, it orbits very slowly, likely taking more than 1,000 years to take one trip around the sun.

Read more about this discovery via Carnegie Institution for Science

Bottom line: 2018 VG18 is the most distant object yet known in our solar system. It’s a small body, 120 times Earth’s distance from the sun, but it may have a big role to play in the discovery of a large, as-yet-unknown Planet X (aka Planet 9).