NASA said this week (December 14, 2015) that astronomers have solved a long-standing mystery of why some exoplanets – large ones, orbiting close to their suns – have less water than expected. Turns out the water is there, but hidden by clouds in the planets’ atmospheres. These astronomers used the Hubble and Spitzer space telescopes to survey 10 hot, Jupiter-sized exoplanets in close orbits around their stars. They found a correlation between hazy or cloudy atmospheres and faint water detection. They’re excited about these results, because it means they can rule out the idea of dry hot Jupiters, an idea that a study co-author – Jonathan Fortney of the University of California, Santa Cruz – said:

… would require us to completely rethink our current theories of how planets are born.

We’re talking here about the subset of known exoplanets that are gaseous like the planet Jupiter, largest planet in our solar system, but that orbit very close to their stars (Jupiter orbits at about 5 times Earth’s distance from our sun).

Their close proximity to their stars makes them blistering hot, and difficult to observe in the glare of starlight. In the past, the Hubble Space Telescope by itself has explored only a handful of hot Jupiters. These initial studies have found several planets to hold less water than predicted by atmospheric models.

… the largest-ever spectroscopic catalogue of exoplanet atmospheres. All of the planets in the catalog follow orbits oriented so the planet passes in front of their parent star, as seen from Earth. During this so-called transit, some of the starlight travels through the planet’s outer atmosphere.

The atmosphere, said one astronomer in the study:

…leaves its unique fingerprint on the starlight, which we can study when the light reaches us.

The team combined data from the Hubble and Spitzer Space Telescopes to attain a broad spectrum of light covering wavelengths from the optical to infrared. NASA explained:

It was this comparison that allowed the team to find a correlation between hazy or cloudy atmospheres and faint water detection.

The astronomers said it’s first time they’ve had enough coverage across the range of wavelengths to compare multiple features from one planet to another.

They said they found the planetary atmospheres to be much more diverse than we expected.

The results are being published in the December 14, 2015 issue of the journal Nature. 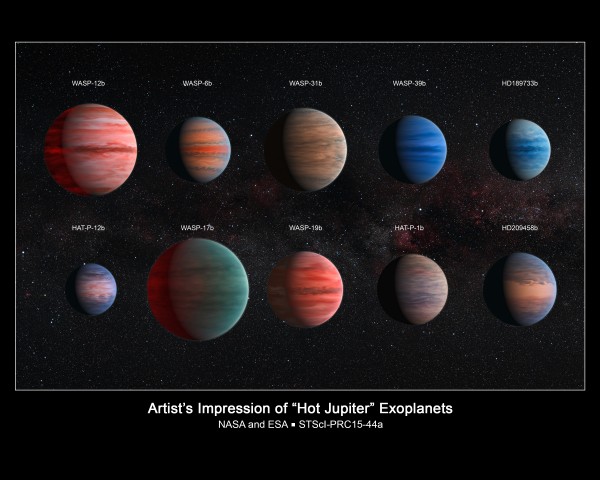 Bottom line: Of the nearly 2,000 planets confirmed to be orbiting other stars, a subset are gaseous planets with characteristics similar to those of Jupiter but orbiting very close to their stars. They are blistering hot and difficult to observe. Initial observations with the Hubble Space Telescope suggested these planets were drier than expected. Now a new survey of 10 hot Jupiters shows a correlation between haze or clouds in the planets’ atmospheres and faint water detection. The astronomers conclude that the water is there, but hidden by clouds.

Thank you! Your submission has been received!
Oops! Something went wrong while submitting the form.
END_OF_DOCUMENT_TOKEN_TO_BE_REPLACED

Venus brightest for 2021 around December 3