How did these extra supermassive black holes get into the Milky Way? These scientists – led by Michael Tremmel at Yale – think the sibling black holes, if they exist, indicate mergers between our Milky Way and other galaxies in the early universe. If a smaller galaxy joined ours, it might have deposited its own central supermassive black hole within our galaxy. When the universe was young, this might have happened several times.

The new study was published April 24 in the peer-reviewed Astrophysical Journal. Tremmel was speaking of the computer simulation when he said:

Could we find one of our Milky Way’s sibling black holes now? Probably not. Tremmel said that, since wandering supermassive black holes are predicted to exist far from the centers of galaxies and outside of galactic disks, they’re unlikely to be accreting more gas. Since it’s the accretion of matter that causes all the observable activity near a black hole, any sibling supermassive black holes for our Milky Way or other galaxies would effectively be invisible. Tremmel said:

We are currently working to better quantify how we might be able to infer their presence indirectly.

If they exist, could unseen supermassive black holes in our Milky Way galaxy somehow affect us? No. Tremmel explained:

It is extremely unlikely that any wandering supermassive black hole will come close enough to our sun to have any impact on our solar system. We estimate that a close approach of one of these wanderers that is able to affect our solar system should occur every 100 billion years or so, or nearly 10 times the age of the universe. 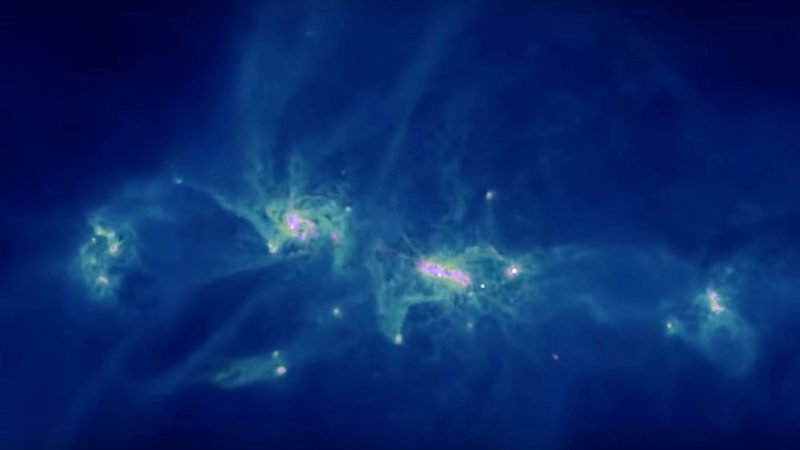 Simulated view of black holes merging in the early universe, via YaleNews.