Update on S2, the star plunging past the Milky Way’s black hole

Astronomers report no companion found for S2, the star orbiting near our Milky Way’s central black hole. It’s an “all-clear” for an exciting test of Einstein’s Theory of General Relativity. 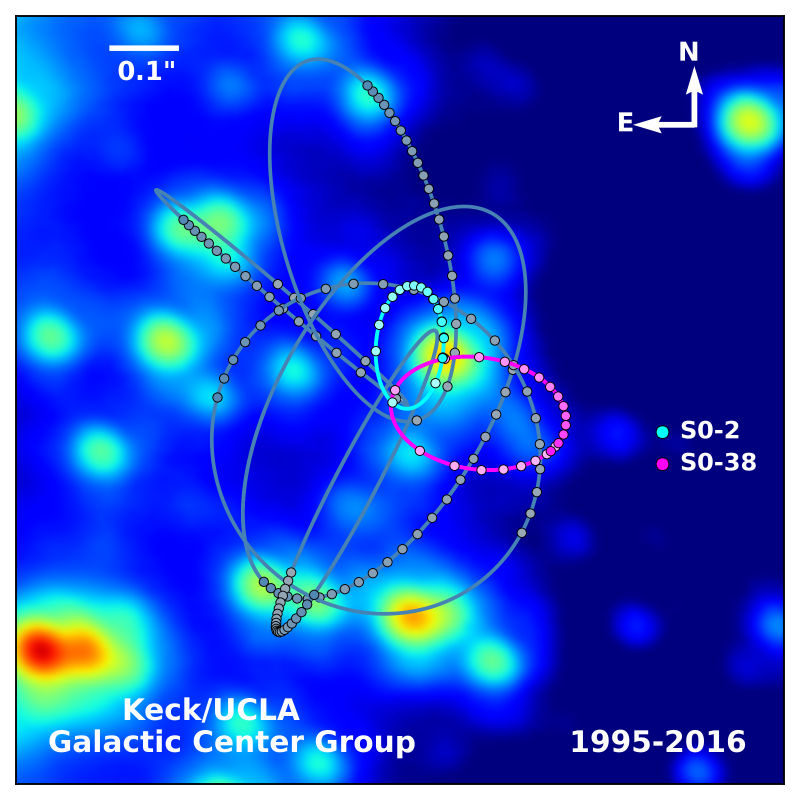 Artist’s concept of the orbit of the star S2 (sometimes S0-2), shown in light blue. In the next few months, this star is expected to plunge near a gigantic black hole in our galaxy. Image via S. Sakai/A.Ghez/Keck Observatory/UCLA Galactic Center Group.

One of the fascinating findings of modern astronomy is that large galaxies, including our home galaxy the Milky Way, have supermassive black holes at their cores. The Milky Way’s central black hole is called Sagittarius A* (pronounced “Sagittarius A star”), or Sgr A* for short, and is known to have a mass of about 4 million suns. Astronomers recently watched a gas cloud plunge near the hole, and now they’re watching several stars orbiting near it, in particular a star called S2 (sometimes S0-2). Thanks to recent observations – published in the peer-reviewed Astrophysical Journal in late February, 2018 – astronomers with UCLA’s Galactic Center Group now say they have an “all-clear” to use S2 for a test of Einstein’s Theory of General Relativity.

Until now, it was thought that S0-2 might be a double star. Two stars orbiting each other would have complicated the upcoming gravity test.

But a team of astronomers led by Devin Chu of Hilo, Hawaii – an astronomy grad student at UCLA – has found that S2 doesn’t have a companion:

… at least one that is massive enough to get in the way of critical measurements that astronomers need to test Einstein’s theory.

S2 is young and about 15 times more massive than our sun. That’s good; it means it’s bright, helpful because the star is relatively distant from Earth – in contrast to most Milky Way stars we might mention – at 26,000 light-years. Did you catch that number, 26,000 light-years? That’s our approximate distance from the center of the galaxy, and the weird and wonderful physics in play there.

In their recent study, Chu and his colleagues described an analysis of 87 previous measurements of S2, dating back as far as 2000. Of those, 12 were newly reported in this paper, taken between 2014 and 2016.

S2 is expected to make its closest pass by the black hole during 2018, and it’s when the star whips nearest the hole that the relativity test will take place. Astronomers will use the star’s motion to try to confirm the mass of the black hole (now thought to be about 4.15 million solar masses).

And they’ll also use S2’s motion to try to confirm Einstein’s prediction that very strong gravitational fields should “stretch out” wavelengths of light, causing a gravitational red shift. 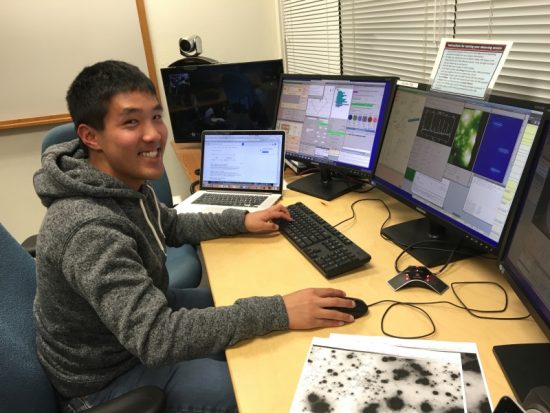 UCLA grad student Devin Chu is 1st author on the new study, showing that S2 doesn’t have a companion star and clearing the way for the planned relativity tests. Image via Keck Observatory.

[S2] orbits Sgr A* on an ellipse that takes about 15 years to complete. The diameter of its orbit is about 300 billion km [200 billion miles], which may sound like a lot, but we’re talking about a supermassive black hole here! That’s close!

And it gets closer. Because the orbit is an ellipse, the star drops down to a mere 18 billion km [11 billion miles] from the black hole, a positively terrifying close approach. That’s only four times farther from the black hole than Neptune is from our sun.

When it does this, the gravity of the black hole is so fierce it’ll accelerate the star to about 6,000 km [4,000 miles] per second — fast enough to cross the continental U.S. in less than a second …

That close to a black hole, relativistic effects predicted by Einstein’s equations start to become important. For example, the light from the star will have to fight the gravity of the black hole to get to us, losing energy on its way out. This is called a gravitational redshift. When an object approaches or moves away from an observer, the light shifts in wavelength a bit, which is just plain old redshift. The amount of the shift depends on the velocity.

In the case of S2, at closest approach gravitational redshift acts like another 200 kilometers per second added to the star’s motion! That’s enough to measure pretty easily, so astronomers should definitely see that. 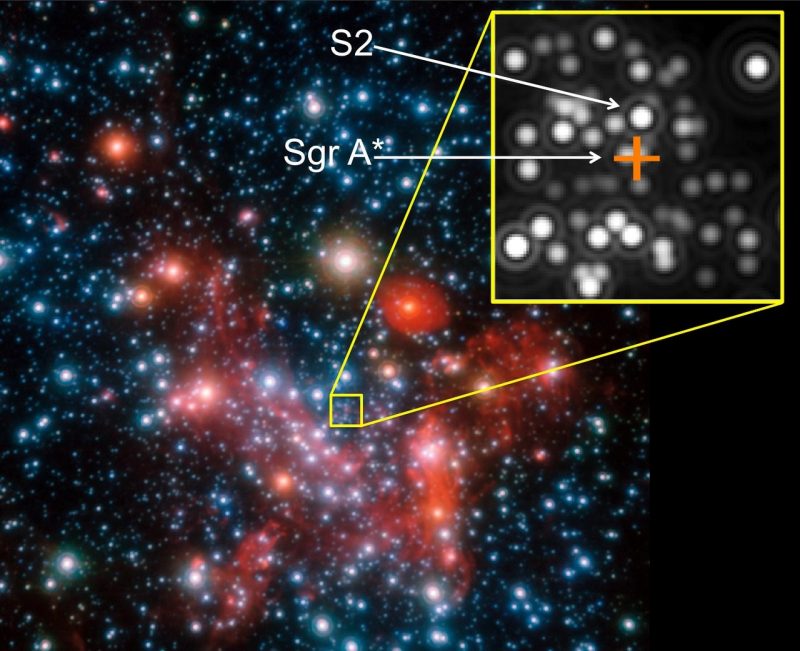 Infrared image of the center of our Milky Way galaxy. The position of the Milky Way’s central black hole – Sgr A* – is marked by an orange cross. Image via ESO/ MPE/ S. Gillessen et al.

Astronomers with UCLA’s Galactic Center Group said they hope to witness the star being pulled at:

… maximum gravitational strength – a point where any deviation to Einstein’s theory is expected to be the greatest.

Tuan Do, deputy director of the Galactic Center Group, said in a statement:

It will be the first measurement of its kind. Gravity is the least well-tested of the forces of nature. Einstein’s theory has passed all other tests with flying colors so far, so if there are deviations measured, it would certainly raise lots of questions about the nature of gravity!

We have been waiting 16 years for this. We are anxious to see how the star will behave under the black hole’s violent pull. Will S0-2 follow Einstein’s theory or will the star defy our current laws of physics? We will soon find out! 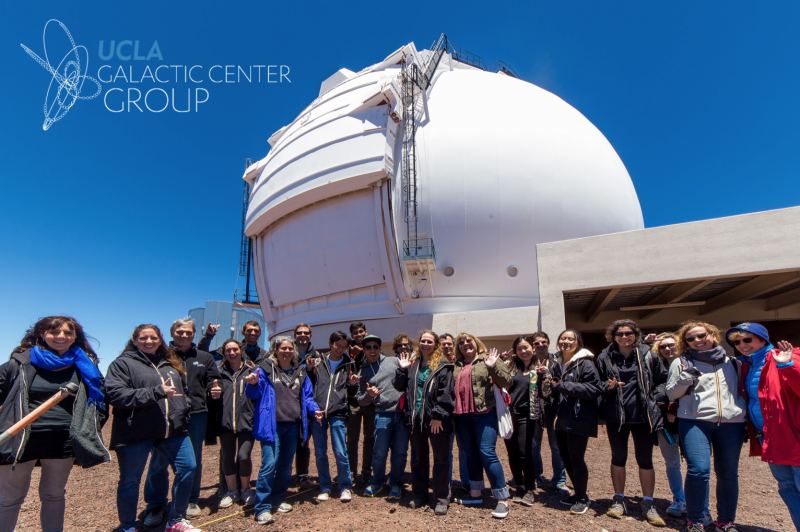 Astronomers with UCLA’s Galactic Center Group gather for a photo during a visit to Keck Observatory, located atop Maunakea, Hawaii. Members of the group will return to this site in the spring of 2018 to begin observations of S2 as the star travels towards its closest distance to our Milky Way’s central supermassive black hole. Image via Keck Observatory.

By the way, in other news about our Milky Way’s black hole, scientists expect the first direct image of Sgr A* soon. So there are big, important research projects in play this year related to the supermassive black hole in the center of our galaxy.

Bottom line: Astronomers report an “all clear” – no companion found for S2, the star orbiting near our Milky Way’s central black hole. They hope to use this star later in 2018 for a test of Einstein’s Theory of General Relativity.

Source: Investigating the Binarity of S0-2: Implications for Its Origins and Robustness as a Probe of the Laws of Gravity around a Supermassive Black Hole