A new computer modeling study shows that – some 4 billion years ago – a barrage of incoming debris from space likely formed what we know today as Earth’s oldest rocks. 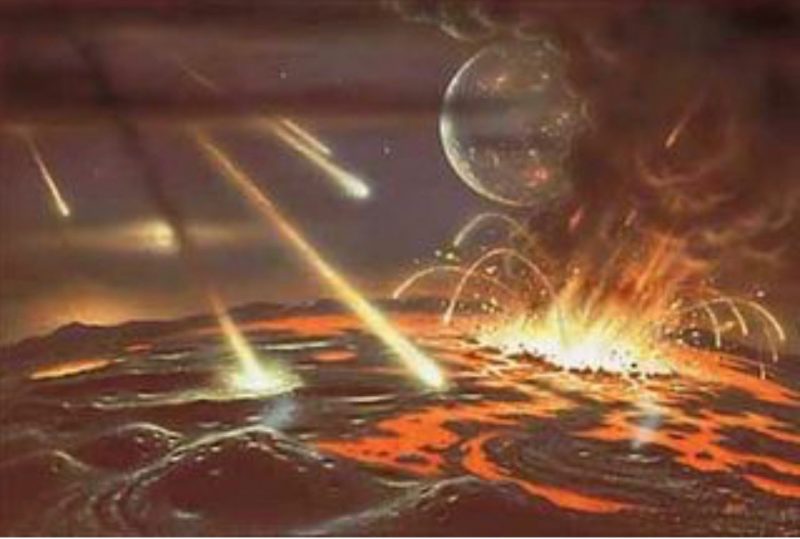 Artist’s concept of the period in Earth’s early history, about 4 billion years ago, when meteorites bombarded our world. Image via Paleoblog.

Scientists meeting in Boston this week at the Goldschmidt conference reported on 4.02-billion-year-old rocks from Acasta River, Canada, site of the world’s oldest exposed rocks. They presented results from a new computer modeling study, showing the rocks probably formed at high temperatures and at a surprisingly shallow depth in the crust of the young Earth, about 4 billion years ago. In fact, these scientists said, the rocks formed only about half a billion years after Earth itself emerged from a spinning cloud of dust and gas around our local sun. According to these scientists, the high temperatures needed to melt Earth’s shallow crust at the time were likely caused by a meteorite bombardment. They said the incoming space rocks melted the iron-rich crust and formed the granites we see today.

The team presented this new work at the Goldschmidt conference on August 14, 2018, following publication in the peer-reviewed journal Nature Geoscience. A statement from these scientists explained:

The felsic rocks (rocks rich in silica/quartz) found at the Acasta River in Canada, are the Earth’s oldest rocks, although there are older mineral crystals (note: Rocks from Jack Hills in Australia contain zircon crystals from up to 4.4 billion years ago, embedded in younger rocks). Scientists have long known that the Acasta rocks are different from the majority of felsic rocks we see today, such as the granites widely used as a building or decorative material.

Now a group of scientists from Australia and China have modeled the formation of the oldest Acasta felsic rocks and found that they could only have been formed at low pressures and very high temperatures.

Our modeling shows that the Acasta River rocks derived from the melting of pre-existing iron-rich basaltic rock, which formed the uppermost layers of crust on the primitive Earth … It would have needed something special to produce the 900 degrees Celsius [1,700 Fahrenheit] temperatures needed to generate these early felsic rocks at such low pressures, and that probably means a drastic event, most likely the intense heating caused by meteorite bombardment.

We believe that these rocks may be the only surviving remnants of a barrage of extraterrestrial impacts which characterized the first 600 million years of Earth history.

The Acasta River is part of the Slave Craton formation in Northern Canada, north of Yellowknife and the Great Slave Lake. The area is the homeland of the Tlicho people, which led to the geologists who discovered the rocks giving them the name Idiwhaa, derived from the Tlicho word for ancient.

The Acasta River area of Canada is the site of the world’s oldest rocks, Acasta gneiss. Image via Geographic.org.

Bottom line: Scientists used computer modeling to show that Earth’s oldest rocks were probably formed by heat from a barrage of incoming space rocks, more than 4 billion years ago.