We already know that Gale Crater on Mars used to hold a lake or series of lakes a few billion years ago. Now, NASA’s Curiosity rover has found evidence for ancient giant floods that washed through the region as well.

Gale Crater on Mars used to contain a lake, or series of lakes, a few billion years ago. Streams once emptied into that lake. Now, new evidence from the Curiosity rover suggests that giant floods also once washed through this region. Computer-generated image via Flickr user Kevin Gill. See more of Kevin’s computer graphics depicting Martian lakes and rivers.

NASA’s Curiosity rover has been exploring Gale Crater on Mars since 2012. In that time, it’s confirmed that a lake – or series of lakes, and flowing streams – existed there a few billion years ago. It’s more evidence that Mars was once a wetter and much more habitable environment than it is today. On November 18, 2020, scientists announced a new study based on an analysis of Curiosity’s data that has yielded another glimpse into Gale Crater’s past: megafloods. They are giant floods, likely caused by a meteorite impact, that washed through the crater with incredible power, leaving behind ripples that can still be seen today.

The researchers – at Cornell University, Jackson State University, the Jet Propulsion Laboratory, and the University of Hawaii – published the new peer-reviewed findings in Scientific Reports on November 5, 2020.

These scientists said that the heat from a meteorite impact likely created the megafloods by melting ice on the Martian surface. The finding is a bit of a surprise, since the telltale geologic structures were first seen by Curiosity, and had not previously been identified from orbit, as stated by co-author Alberto G. Fairén:

We identified megafloods for the first time using detailed sedimentological data observed by the rover Curiosity. Deposits left behind by megafloods had not been previously identified with orbiter data. 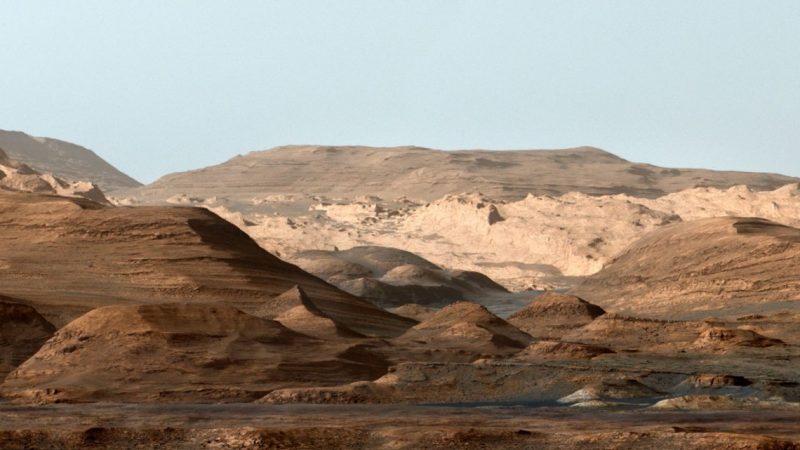 View of foothills and buttes at the base of Mount Sharp in Gale Crater. The colors in this image were enhanced to be more Earth-like, making it easier for scientists to see the various stratification layers in the hills. Curiosity has found huge wave-shaped features in the sedimentary layers in the crater indicating that huge megafloods once washed through here. Image via NASA/ JPL/ Cornell University.

The rover found giant wave-shaped features in the sedimentary layers of Gale Crater. The features – called megaripples (one kind of sedimentary ripple mark) or antidunes – are about 30 feet (9 meters) tall and spaced about 450 feet (about 140 meters) apart. They are evidence of megafloods on the bottom of the crater around 4 billion years ago. Their appearance is strikingly similar to features on Earth created by melting ice about 2 million years ago.

According to the scientists, a large impact was the cause of the megafloods, but just how did that happen?

The impact not only melted the ice, but also released carbon dioxide and methane, which had been frozen and trapped below the surface. This combination created warmer and wetter conditions for a short period of time. The resulting condensation in the atmosphere formed water vapor clouds similar to those on Earth. From those clouds came torrential rains over much of the planet.

In the case of Gale Crater, the rain water combined with other water washing down from Mount Sharp, the large mountain in the middle of the crater that Curiosity is now exploring at its base. All that water produced huge flash floods that created the ripple features we can still see today. That includes gravel ridges in the Hummocky Plains Unit and the ridge-and-trough band formations in the Striated Unit.

The geologic clues left behind reveal an environment in Gale Crater a lot different than what we see now. It’s hard to imagine giant floods in Gale Crater, but the geologic evidence shows that they happened.

Previous evidence from Curiosity had also confirmed the former presence of long-lived lakes in the crater, as well as streams that emptied into them. Fairén said:

Early Mars was an extremely active planet from a geological point of view. The planet had the conditions needed to support the presence of liquid water on the surface, and on Earth, where there’s water, there’s life. So early Mars was a habitable planet. Was it inhabited? That’s a question that the next rover Perseverance … will help to answer. 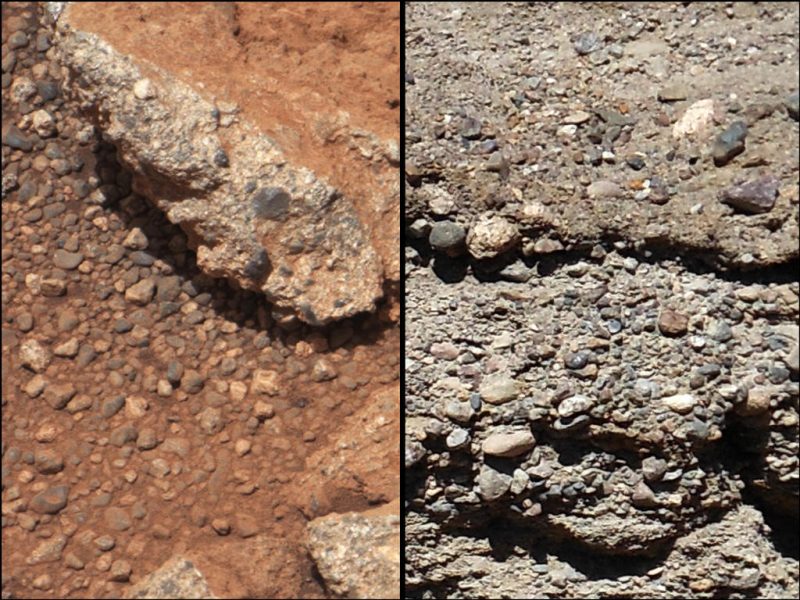 Comparison of ancient streambed gravel in Gale Crater on Mars (left) with an example on Earth (right), more evidence that water once gushed through the crater a few billion years ago. Image via NASA/ Phys.org.

Partial view of the landscape in Ares Vallis around the Pathfinder lander in 1997. The Twin Peaks hills can be seen in the distance, and many of the larger rocks are tilted in the same direction, evidence for massive floods in the past. Image via NASA/ JPL/ Timothy Parker.

Evidence of flash flooding has been seen elsewhere on Mars as well, from above, by orbiting spacecraft. NASA’s Pathfinder mission, which landed in Ares Vallis in 1997, also saw small rounded pebbles and larger rocks inclined in the same direction and stacked, all evidence of massive floods in the distant past. The findings from Curiosity now add to all of that, with additional in situ measurements from the ground. Curiosity has even studied ancient streambed gravel, still in place after being deposited by streams flowing into Gale Crater a couple billion years ago.

With giant floods, lakes, and streams, Gale Crater was once a much different place. It was certainly habitable, at least for microbes. We still don’t know if anything ever actually did live there, and the rover isn’t equipped to tell us, but the more that Curiosity explores, the more possible it seems. But even if there weren’t any little critters to witness it at the time, the landscapes of Gale Crater and other places were forever changed by those raging waves long ago.

Source: Deposits from giant floods in Gale crater and their implications for the climate of early Mars