Have you seen the Mayak satellite?

On July 14, an amateur group in Russia launched a small satellite called Mayak. They said it would become the “brightest shooting star” in the sky. Why’d they do it? Here’s how to look for it. 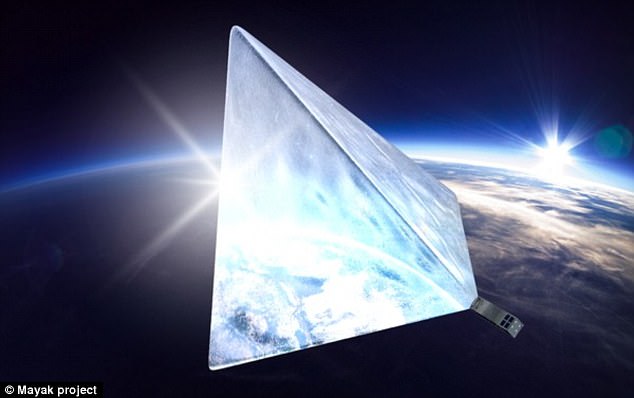 Artist’s illustration of Russian Mayak satellite in orbit, with its reflectors unfurled, via Mayak.

A team of young Russians – led by Moscow State Mechanical Engineering University (MAMI) – managed to raise more than $30,000 on Russian crowdfunding website Boomstarter, in order to launch their own small satellite. The satellite is called Mayak, which means beacon in English. It’s a cubesat, roughly the size of a loaf of bread. And it’s up there. Mayak went into space on July 14, 2017, as part of a secondary payload, launched on a Soyuz 2.1v vehicle from Baikonur Cosmodrome in Kazakhstan. It’ll be orbiting Earth, about 370 miles (600 km) high, for the coming month. It’s supposed to be very, very bright, so bright that it would, supposedly, ruin night skies and threaten astronomy.

Satellite tracking websites like Heavens Above are already trying to follow it, hoping to offer information on Mayak’s passes over various parts of the world. Heavens Above commented:

A new small satellite has just been launched which will deploy a large reflector once in orbit and has the potential to be very bright. We now have a provisional orbit from Space-Track which you can use to generate predictions. Please note that the magnitude estimates are possibly very inaccurate until actual observations are reported.

Plus Mayak has its own app, available to those who back the project.

We haven’t heard yet from anyone who’s actually seen it.

The hunt is on. Heavens-Above now has pass predictions up for the new Russian reflector sat "Mayak," listing it as NORAD ID 2017-042F/42830. pic.twitter.com/EdVSvFR6u8

How bright is Mayak? Brightness estimates have varied, but the idea was that it would be the brightest shooting star in the sky. Some estimated it would be nearly as bright as Venus, the sky’s brightest planet. Its brightness is part of its purpose, which is partly, simply, to inspire people. From Mayak’s website:

The main objective of the project is to make cosmonautics and space research poplar in Russia, as well as to make scientific and technical researches attractive to youth.

Question: Why did you build the satellite?

Answer: Everyone is used to think that flying into space is a privilege of state and military corporations. We wanted to prove that space is simpler and closer than it seems, and a team of enthusiasts can launch a satellite into space!

Mayak’s planned launch inspired controversy after this tweet on June 28 from Jonathan McDowell (@planet4589 on Twitter), an astronomer at the Harvard-Smithsonian Center for Astrophysics. “As bright as magnitude -10” is on the extreme side of the predictions for Mayak’s brightness, by the way. That would make the satellite nearly as bright as a full moon! Here’s how to understand stellar magnitude.

The small satellite’s brightness is designed to come from a giant pyramid-shaped solar reflector, which would be unfurled once in space. This large light reflector might not be unfurled yet; we don’t know. The reflector is made of Mylar and is designed to span 170 square feet (16 square meters) and is reportedly 20 times thinner than human hair. Inspiration isn’t the satellite’s only purpose. The mission is also meant to act as a technology demonstration, to perform real-life tests on how to brake satellites in orbit and de-orbit them, without the need for a booster. And it’s meant to collect data about atmospheric density at high altitudes.

How can you see it? Here are those two things to try again.

First, Mayak has its own app, for project backers.

Second, check the website Heavens Above, which has a tracking page about Mayak. As of July 18, Heavens Above was still warning that its predictions might be inaccurate.

The video below shows Mayak’s launch, along with 72 other satellites, on July 14, 2017 at 9:36 Moscow Time from the Baikonur cosmodrome.

Bottom line: Russian satellite Mayak launched July 14, 2017 from Baikonur Cosmodrome in Kazakhstan. Some said it would become as bright as the brightest star in the sky. Tips on how to spot it.