Could ice sheets, not rivers, have formed the channels on Mars?

New research suggests that many of Mars’ ancient channels, thought to have been carved by flowing surface water, were formed instead by meltwater beneath glacial ice sheets. 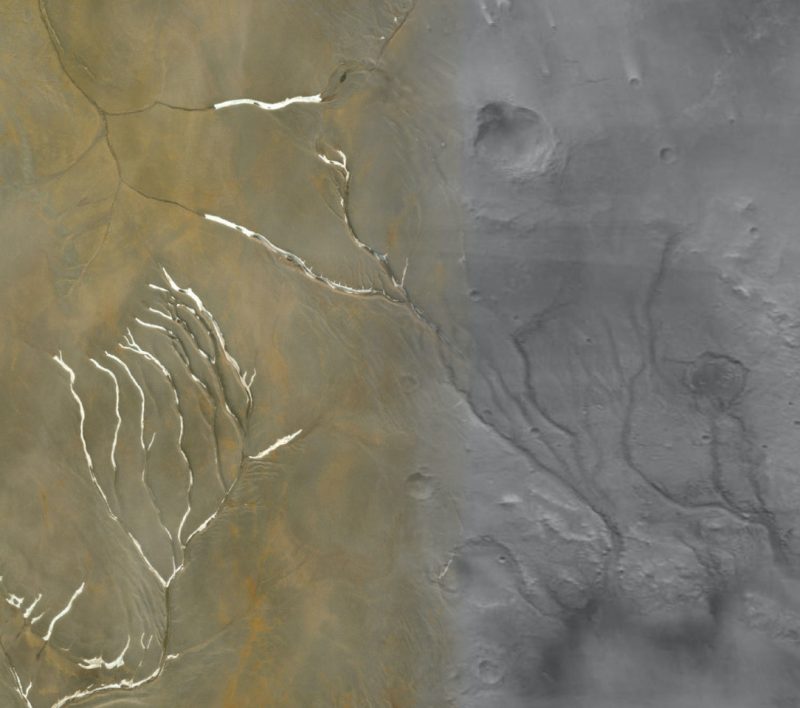 Earth on the left, Mars on the right. Left, the glacier-cut channels on Devon Island in the Canadian Arctic. Right, channels of unknown origin in Mars’ Maumee Valles region. Mars’ channels might have been cut by rivers, or – as in Earth’s Arctic – they might have been formed by meltwater under glaciers. Image via Cal-Tech CTX mosaic/ MAXAR/Esri/ UBC.

Thanks to orbiting spacecraft, we’ve now seen thousands of channels on Mars. They look like river channels, and most Mars researchers see them as evidence of a warmer, wetter Mars in the distant past. But, in early August 2020, Mars researchers announced that many of the channels weren’t carved by flowing river water at all. Instead, these scientists claim, the channels are due to the flow of meltwater beneath glacial ice sheets that crawled over Mars’ surface long ago.

The researchers are from the University of British Columbia (UBC), Western University (Western) and Arizona State University (ASU). Their peer-reviewed findings were published in Nature Geoscience on August 3, 2020.

The southern highlands of Mars are dissected by hundreds of valley networks, which are evidence that water once sculpted the surface. Characterizing the mechanisms of valley incision may constrain early Mars climate and the search for ancient life. Previous interpretations of the geological record require precipitation and surface water runoff to form the valley networks, in contradiction with climate simulations that predict a cold, icy ancient Mars. Here we present a global comparative study of valley network morphometry, using a principal-component-based analysis with physical models of fluvial, groundwater sapping and glacial and subglacial erosion. We found that valley formation involved all these processes, but that subglacial and fluvial erosion are the predominant mechanisms. This is supported by predictions from models of steady-state erosion and geomorphological comparisons to terrestrial analogues. The inference of subglacial channels among the valley networks supports the presence of ice sheets that covered the southern highlands during the time of valley network emplacement.

If the researchers are right, their conclusions would seem to pour cold water, literally, on the idea that Mars was warm and wet enough early in its history for flowing rivers, rain and oceans. So how did they determine that not all “river” channels on Mars were really made by rivers? 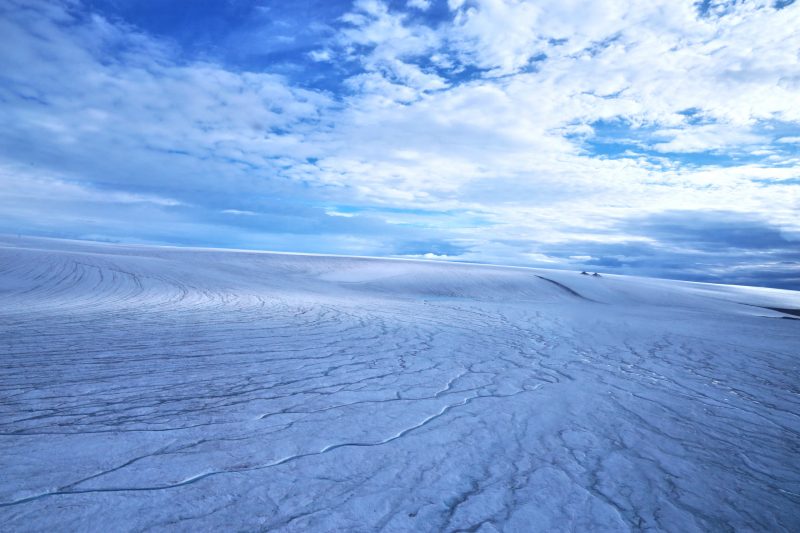 The Devon Island ice cap in the Canadian Arctic Archipelago, which is probably similar to how much of Mars looked when meltwater formed channels beneath ice sheets, according to the researchers. Image via Anna Grau Galofre/ UBC.

These scientists developed new techniques to study Mars channel formations. Over 10,000 Mars channels were studied, and they were then compared to the subglacial channels on Devon Island in the Canadian Arctic Archipelago. The researchers found a number of striking similarities. Anna Grau Galofre, formerly at UBC and now at ASU, and lead author of the study, stated:

For the last 40 years, since Mars’ valleys were first discovered, the assumption was that rivers once flowed on Mars, eroding and originating all of these valleys. But there are hundreds of valleys on Mars, and they look very different from each other. If you look at Earth from a satellite you see a lot of valleys: some of them made by rivers, some made by glaciers, some made by other processes, and each type has a distinctive shape. Mars is similar, in that valleys look very different from each other, suggesting that many processes were at play to carve them.

Many of the Martian channels resembled the ones in the Canadian Arctic Archipelago. So what does that tell scientists about Mars’ history? It would imply that those channels formed under cold, not warm conditions. Co-author Gordon Osinski at Western said:

Devon Island is one of the best analogs we have for Mars here on Earth; it is a cold, dry, polar desert, and the glaciation is largely cold-based.

Our study challenges the widely held view that most valley networks on Mars were formed by rivers fed by precipitation. While we found evidence consistent with a small handful of valley networks having formed in this way, our observations suggest that the majority formed beneath ice sheets. 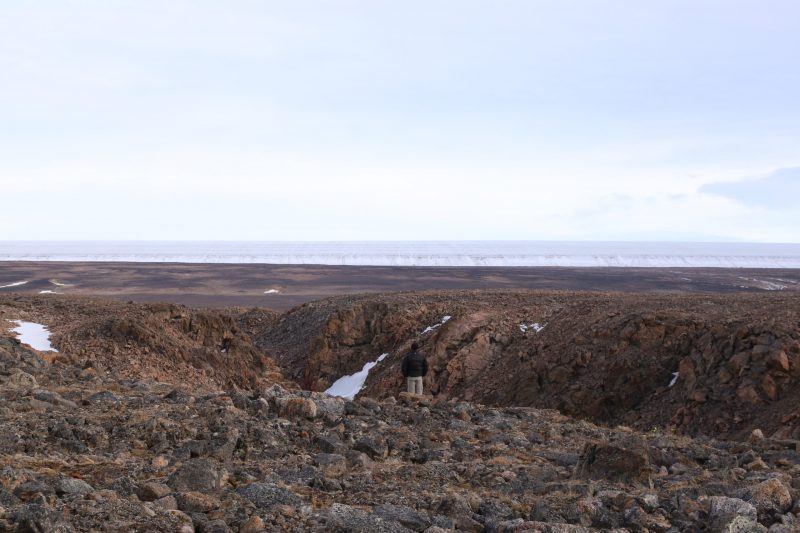 Study co-author Mark Jellinek of UBC looking towards the Devon Island ice cap. The rocks he is standing on are more than a million years old. Image via Anna Grau Galofre/ UBC.

These channels were most likely formed beneath glacial ice sheets, by meltwater underneath the ice. The same process happens beneath glaciers on Earth. As co-author Mark Jellinek at UBC explained:

These results are the first evidence for extensive subglacial erosion driven by channelized meltwater drainage beneath an ancient ice sheet on Mars. The findings demonstrate that only a fraction of valley networks match patterns typical of surface water erosion, which is in marked contrast to the conventional view. Using the geomorphology of Mars’ surface to rigorously reconstruct the character and evolution of the planet in a statistically meaningful way is, frankly, revolutionary.

The history of water on Mars and the warm and wet versus cold and wet scenarios have been the subjects of intense debate. We do know there used to be lakes on the surface, thanks to evidence from orbiting spacecraft and rovers such as Opportunity and Curiosity. But were the conditions warm or cold? Was there rain? Were there oceans? It should be noted that these new findings explain many of the channels, but others are still considered to be actual river channels. But then how and when did they form? NASA’s Perseverance rover will be landing at the location of one of these channels in February 2021, where a once-flowing river emptied into Jezero Crater and formed a striking delta that can still be easily seen today. 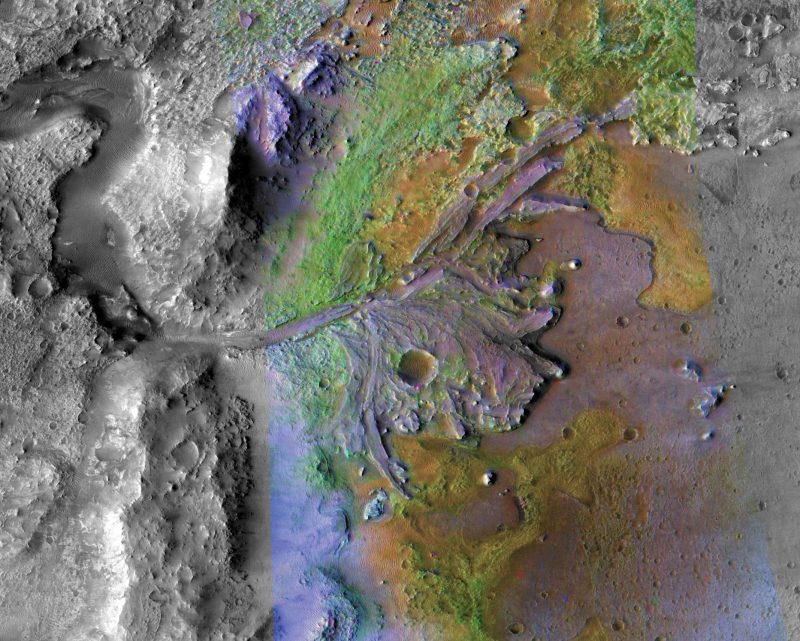 An ancient river delta in Jezero Crater on Mars (enhanced color). If the researchers are right, most of the river channels on Mars were actually formed by meltwater beneath ice sheets and not flowing water on the surface. But others are known to have been formed by flowing water, such as the channel that cut into the edge of the crater and created the delta. This is where NASA’s Perseverance rover will be landing in February 2021 to search for evidence of ancient life. Image via NASA/ JPL-Caltech/ ASU.

The subglacial channels fit with current climate models of Mars, which state that the planet should have been cooler when they formed about 3.8 billion years ago. This is due to the younger sun being less intense than it is now. Grau Galofre said:

Climate modeling predicts that Mars’ ancient climate was much cooler during the time of valley network formation. We tried to put everything together and bring up a hypothesis that hadn’t really been considered: that channels and valley networks can form under ice sheets, as part of the drainage system that forms naturally under an ice sheet when there’s water accumulated at the base.

While the concept of a colder and icier Mars instead of a warmer and wetter Mars may not sound as appealing for those hoping to find life, the new findings may actually bolster the chances of life having existed at the time. The researchers say that these regions of glacial meltwater would have provided better survival conditions. The ice sheets would have helped to protect and stabilize the water and provide shelter from solar radiation from the sun. The planet’s magnetic field, which protected it from the radiation, may have already disappeared by the time the glacial meltwater existed.

The new techniques developed by the researchers can also be used to learn more about the early history of Earth as well. Jellinek said:

Currently we can reconstruct rigorously the history of global glaciation on Earth going back about a million to five million years. Anna’s work will enable us to explore the advance and retreat of ice sheets back to at least 35 million years ago – to the beginnings of Antarctica, or earlier – back in time well before the age of our oldest ice cores. These are very elegant analytical tools. 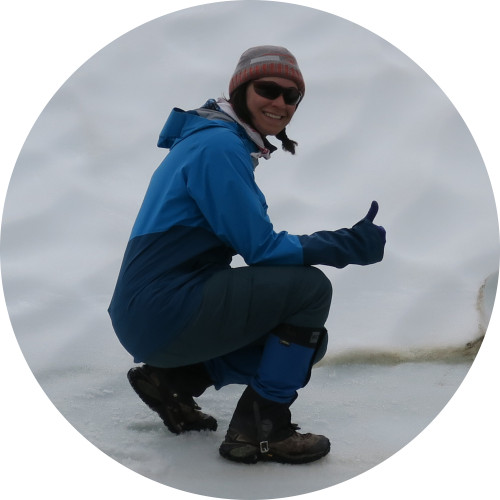 Anna Grau Galofre of UBC and ASU, lead author of the new study. Image via UBC.

If many of Mars’ river channels were actually formed by water from melting ice and not flowing surface water, that will provide more clues as to how much water Mars had in the past and how habitable the planet was a few billion years ago. And, even though this scenario may not seem as exciting as a warmer world covered with rivers, it could still have been quite habitable for tiny Martian microbes. Given other evidence for actual rivers, lakes and possibly even oceans, perhaps there were colder periods alternating with warmer ones? We still don’t know for sure, but the story of water on Mars is a fascinating and complicated one.

Bottom line: Many of Mars’ ancient river channels, thought to have been carved by flowing surface water, might have actually been formed by meltwater beneath glacial ice sheets.