How to make a mountain on Mars

They’re not mountains in the earthly sense. They’re mile-high mounds, which – a new study says – were carved over billions of years by wind and climate. 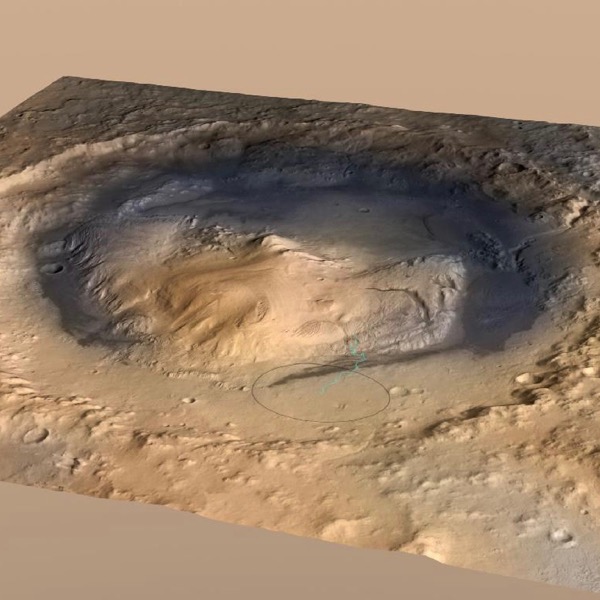 View larger. | It’s called Mount Sharp, and it’s 3 miles (5 km) high, but it’s a ‘mound’ on Mars, carved by wind over billions of years. Mount Sharp is in the center of the Gale Crater, where the Curiosity rover set down in 2012. Click to the larger view for a good look at the rover’s landing place (circle) and path (blue line). Image via NASA/JPL.

On Earth, mountains often form as Earth’s great land plates – called its tectonic plates – smash together. Geologic activity below our world’s surface drives a continual, slow-motion shifting of Earth’s surface. Meanwhile, the planet next door, Mars, has mountains, too, some a mile high or higher. But Mars doesn’t have tectonic activity so it’s been an open question as to how these mountains – or “mounds” as scientists call them – are formed. New research published March 31, 2016, in Geophysical Research Letters shows how, over billions of years, the winds of Mars carved its massive mounds.

Mackenzie Day, a graduate student at the University of Texas at Austin Jackson School of Geosciences and lead author of the new study, said in a statement:

In other words, on Earth, the movement of plate tectonics overrides mountain-building by wind. But not so on Mars. 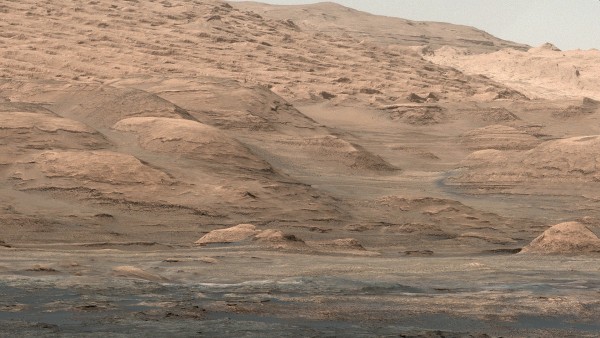 View larger. | The lower flank of Mount Sharp, a sedimentary mound inside Gale Crater on Mars. Image via NASA/JPL-Caltech/MSSS.

Prior to this study, because scientists knew Mars did not have plate tectonics, how the mountains, or mounds, on Mars formed was unknown. These mounds are found at the bottoms of large and ancient craters, such as the Gale Crater, landing site of the Mars Curiosity rover in 2012. Curiosity has been exploring the flanks of the Gale Crater’s central mound, called Mount Sharp.

There’s been a theory out there that these mounds formed from billions of years of wind erosion, but no one had ever tested that before.

So the cool thing about our paper is we figured out the dynamics of how wind could actually do that.

The test took the form of a miniature crater built by the researchers – 11 inches (30 cm) wide and 1.5 inches (4 cm) deep. The researchers filled this tiny test crater with damp sand, placed it in a wind tunnel and tracked the elevation and distribution of sand in the crater until all of it had blown away.

The model’s sediment was eroded into forms similar to those observed in Martian craters, forming a crescent-shaped moat that deepened and widened around the edges of the crater.

Eventually all that was left of the sediment was a mound, which, in time, also eroded away. Day said:

We went from a filled crater layer cake to this mounded shape that we see today.

Read more about Day’s study via the American Geophysical Union

By the way, I couldn’t resist showing you the image below of the first mountain climbers on Mars, our own traveling robot. On March 10, 2016, the Opportunity rover climbed the steepest slope ever tackled by any rover on Mars, while attempting to reach the crest of Knudsen Ridge.

The image above portrays the view from Opportunity, as it climbed at a 32-degree angle on March 10.

Afterwards, in eight drives between the steepest-ever drive and March 31, Opportunity first backed downhill, northward, for about 27 feet (8.2 meters), then drove about 200 feet (about 60 meters) generally southwestward and uphill, toward the next target area. 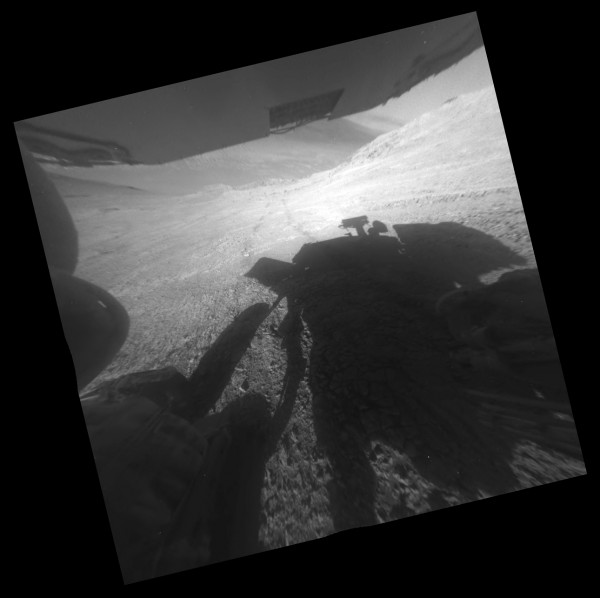 View larger. | Steepest ever climb for a rover on Mars! You’re looking downhill in this image, which shows a shadow and tracks of the rover Opportunity. The image has been rotated 13.5 degrees to adjust for the rover’s tilt. The hillside descends to the left into Marathon Valley on Mars. The floor of Endeavour Crater is seen beneath the underside of a solar panel. Image via NASA/JPL-Caltech. Read more about this image.

Bottom line: Mars doesn’t have mountains in the earthly sense, because it doesn’t have plate tectonics. The “mounds” of Mars can be miles, though, and earthly mountain-climbers may someday scale them. A new study says the Mars mounds were carved over billions of years by wind and climate change.