Researchers at the SETI Institute say that mysterious dark streaks on sun-facing slopes on Mars, debated about for years, may be small landslides caused by a combination of salts and melting ice just below the surface. 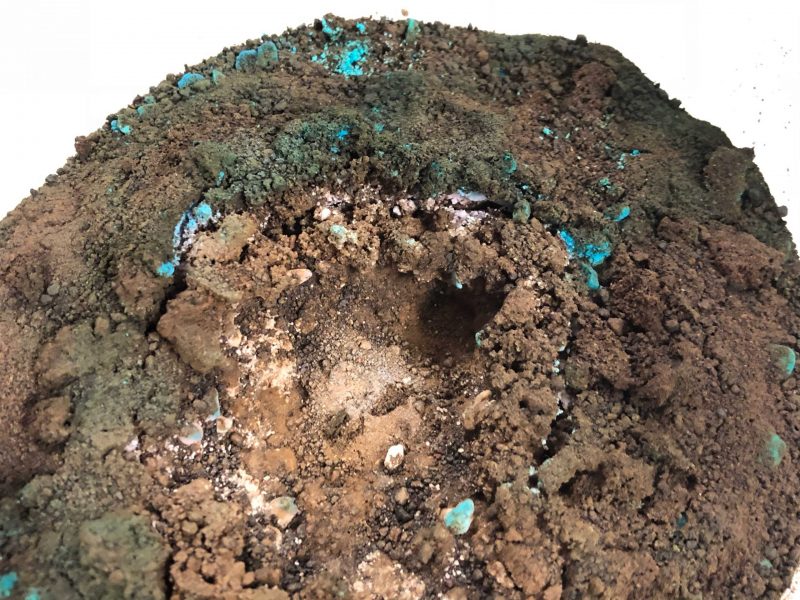 A sample of Mars analog crust (imitation Martian soil) containing sulfate salts (blue and pink). The new study suggests that such salts and melting ice just below the surface on Mars could cause the enigmatic dark streaks on sun-facing slopes. Image via Janice Bishop/ SETI Institute.

For years now, scientists have been trying to figure out what causes weird dark streaks on Martian slopes called recurring slope lineae. They tend to be found on sun-facing slopes and keep repeating in the same places, hence the word “recurring” in the name. Different studies have suggested everything from brief flows of briny water or groundwater to dry landslides. A new theory combines elements of both. The intriguing peer-reviewed results were published in Science Advances on February 3, 2021.

A new theory by a team of researchers from the SETI Institute’s NASA Astrobiology Institute suggests that the mechanism of the streaks is small-scale ice melting in a loose blanket of dust, broken rocks, and other materials near the Martian surface. This activity causes small changes on the surface, which then grow and expand due to wind and dust storms. Researchers say the thin layers of melting ice are caused by interactions of water ice, chlorine salts and sulfates below the surface. This creates a slush that then causes sinkholes, ground collapse, upheave and surface flows. As the team describes it:

Our results demonstrate that interactions of sulfates and chlorine salts in fine-grained soils on Mars could absorb water, expand, deliquesce, cause subsidence, form crusts, disrupt surfaces, and ultimately produce landslides after dust loading on these unstable surfaces. 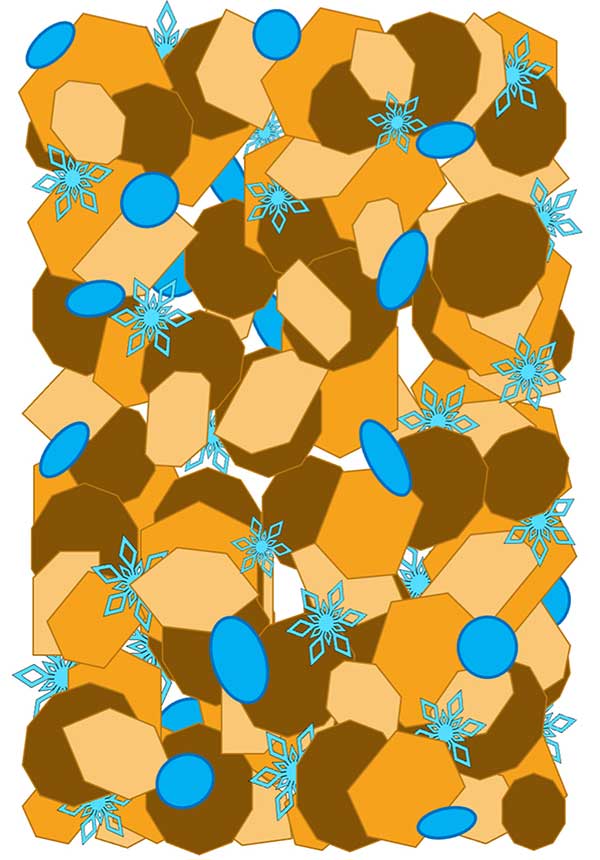 Diagram of mineral and soil grains at -50 to -40 degrees Celsius (-58 to -40 degrees Fahrenheit). Some tiny ice crystals (blue snowflakes) and some liquid water molecules (blue ovals) are present along the surface of other particles (orange and brown shapes). Image via Janice Bishop/ SETI Institute.

This isn’t the first study to suggest chlorine salts as a possible contributor, but it is the first to include observations with a near-surface activity model based on field observations and lab experiments.

Helpful parallels seen on Earth are the similar formations found in the McMurdo Dry Valleys in Antarctica, near the Dead Sea in Israel and in the Salar de Pajonales in the Atacama Desert. In those locations, salts interact with water or gypsum underground and create disruptions on the surface, including collapses and landslides. As team member Nancy Hinman at the University of Montana noted:

During my fieldwork at Salar de Pajonales, a dry salt bed in Northern Chile, I have observed numerous examples of the action of salts on the local geology. It’s gratifying to find that it could play a role in shaping Mars as well.

So how did the scientists test their new theory? 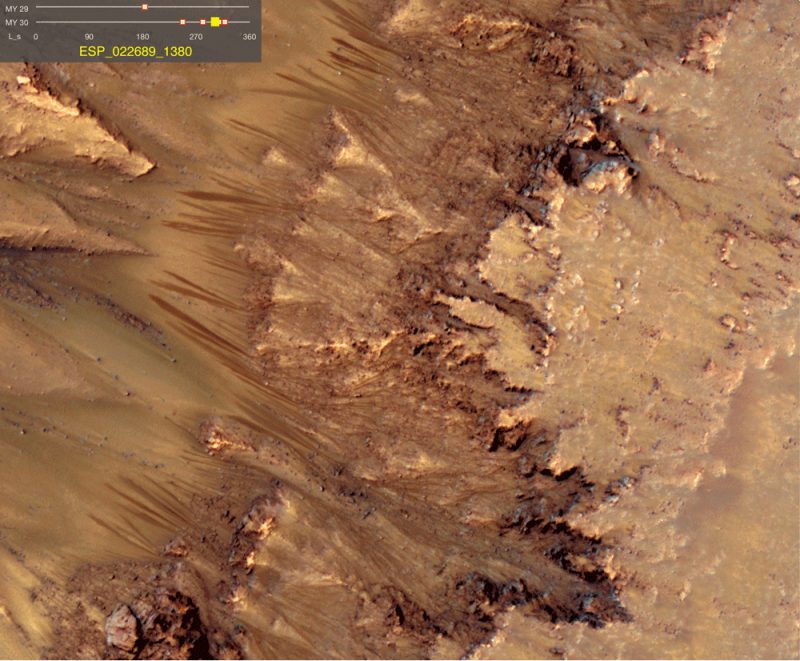 Researchers used Mars analog samples of material containing chlorine salts and sulfates and subjected them to cold temperatures similar to those found on Mars. Near -50 degrees Celsius (-58 degrees Fahrenheit), the researchers found that slushy ice formed. When the temperatures were a little warmer, from -40 to -20 C (-40 to -4 F), the ice gradually began to melt. Team member Merve Yesilbas of Umeå University explained:

Probing the low-temperature behavior of Mars analog permafrost in the lab with infrared spectroscopy revealed that thin layers of liquid-like water were forming along grain surfaces as the salty soils thawed under subzero, Mars-like temperatures.

In this scenario, if water is involved at all, it’s in minuscule amounts in thin films, even less than the previously postulated salty brines. Water molecules would be transferred between the sulfates and chlorides. Bishop said:

I was thrilled to observe such rapid reactions of water with sulfate and chlorine salts in our lab experiments and the resulting collapse and upheave of Mars analog soil on a small scale, replicating geologic collapse and upheave features in karst systems, salt reservoirs, and edifice collapse on a large scale. 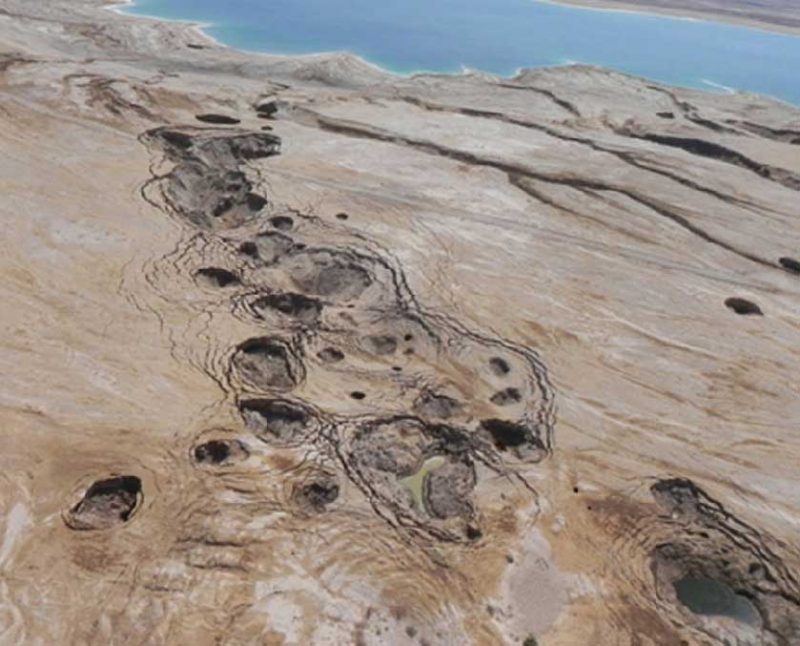 Sinkholes at Wadi Ze’elim near the Dead Sea in Israel. The processes that create them may be similar to the ones creating the dark streaks on Mars. Image via Yoseph Yechieli/ Gideon Baer/ Geological Survey of Israel/ SETI Institute.

The Dry Valleys of Antarctica are an excellent example of Martian conditions seen on Earth. The surface is modified by dry winds, but below ground there is permafrost. Another collaborator, Zachary Burton of Stanford University, said:

Sediments in the Dry Valleys provide an excellent testbed for processes that may be occurring on Mars. The presence of elevated concentrations of sulfates and chlorides a few centimeters below the harsh surface landscape in Wright Valley presents the intriguing possibility that these water-related mineralogical associations and attendant processes could exist on Mars as well.

It seems reasonable that similar chemical reactions could occur below the surface on Mars, because we know the subsurface is rich in water ice in many places. Near the equator, where most of the dark streaks are located, temperatures would periodically be warm enough for the microscale water brines to form. This may also help explain some of the other gullies on Mars, which resemble gullies formed by flowing water on Earth. According to team member Virginia Gulick of SETI Institute:

Tributary gully systems present along the northern (poleward-facing) and northeastern slopes of Krupac Crater and Recurring Slope Lineae lower down the crater wall in this region could be associated with surface features produced through near-surface brine activity, according to our model. 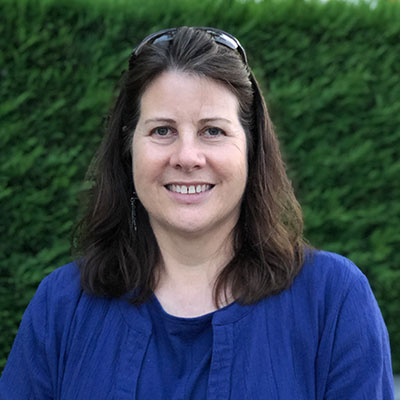 Janice Bishop at the SETI Institute, who led the new study about Recurring Slope Lineae formation on Mars. Image via SETI Institute.

If this model is correct, then water may still be involved in the formation of the dark streaks, just a lot less than previously theorized. It could, however, still have implications for astrobiology and possible microscopic life on Mars, whether in the past or now. There is also evidence for subsurface lakes on Mars still existing today, beneath glaciers where salts could help them remain liquid. Similar lakes can be found beneath polar ice and glaciers on Earth. Ice is also plentiful on Mars, and not just at the polar caps. The Phoenix lander even dug some up with its scoop from only a few inches below the surface back in 2008.

I am excited about the prospect of microscale liquid water on Mars in near-surface environments where ice and salts are mixed with the soil. This could revolutionize our perspective on active chemistry just below the surface on Mars today.

Bottom line: Strange dark streaks on sun-facing slopes on Mars, debated about for years, may be small landslides caused by a combination of salts and melting ice just below the surface, a new study says.

A few 2021 lunar calendars are left. Order yours before they’re gone!