Scientists with the European Space Agency say that the Mars Express orbiter has found evidence of three more salty lakes below Mars’ south pole. The discovery comes two years after the first lake was detected in 2018.

At its surface, Mars is a cold, dry, desert world, where the only water appears to be in the form of vapor, ice or frost. But what about deeper down, below the surface, where temperatures are warmer? In 2018, the European Space Agency’s Mars Express orbiter found the first evidence for subsurface liquid water on Mars, below the planet’s south polar ice cap. It was an exciting discovery, a lake below the red Martian soil that could, possibly, support life. Now, additional data from Mars Express havw not only confirmed that lake, but found three more smaller lakes in close proximity to the first one, researchers have announced.

This newest peer-reviewed discovery was published in Nature Astronomy on September 28, 2020. As described in the abstract:

The detection of liquid water by the Mars Advanced Radar for Subsurface and Ionosphere Sounding (MARSIS) at the base of the south polar layered deposits in Ultimi Scopuli has reinvigorated the debate about the origin and stability of liquid water under present-day Martian conditions. To establish the extent of subglacial water in this region, we acquired new data, achieving extended radar coverage over the study area. Here, we present and discuss the results obtained by a new method of analysis of the complete MARSIS dataset, based on signal processing procedures usually applied to terrestrial polar ice sheets. Our results strengthen the claim of the detection of a liquid water body at Ultimi Scopuli and indicate the presence of other wet areas nearby. We suggest that the waters are hypersaline perchlorate brines, known to form at Martian polar regions and thought to survive for an extended period of time on a geological scale at below-eutectic temperatures. 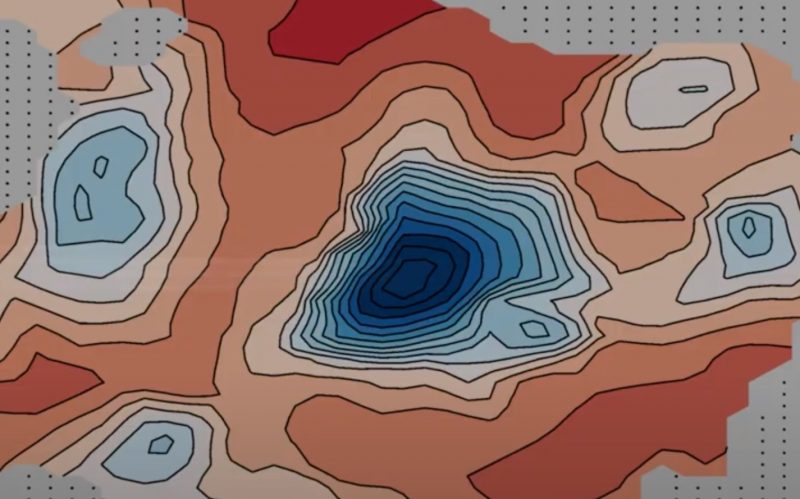 Elena Pettinelli, a planetary scientist at the University of Rome and one of the paper’s lead co-authors, said in a statement:

We identified the same body of water, but we also found three other bodies of water around the main one. It’s a complex system.

Since these lakes are deep below ground, how did the scientists detect them?

All four lakes were discovered by Mars Express, which used the MARSIS radar instrument. Just like on Earth, the radar can penetrate rock and ice to show what lies beneath the surface. One of Mars Express’s main tasks has been to search for subsurface ice deposits, which are plentiful on Mars.

Scientists have long thought that there may be subsurface lakes as well, similar to subsurface glacial lakes on Earth, such as Lake Vostok in Antarctica. Even if the temperature wasn’t warm enough, salts in the lakes could keep them liquid, like brines, and that is exactly what scientists think has been found. Pettinelli said:

From a thermal point of view, it has to be salty.

The first and largest lake was identified from 29 radar observations by Mars Express from 2012 to 2015. The new study revealing all four lakes was based on many more observations, 134 in all. 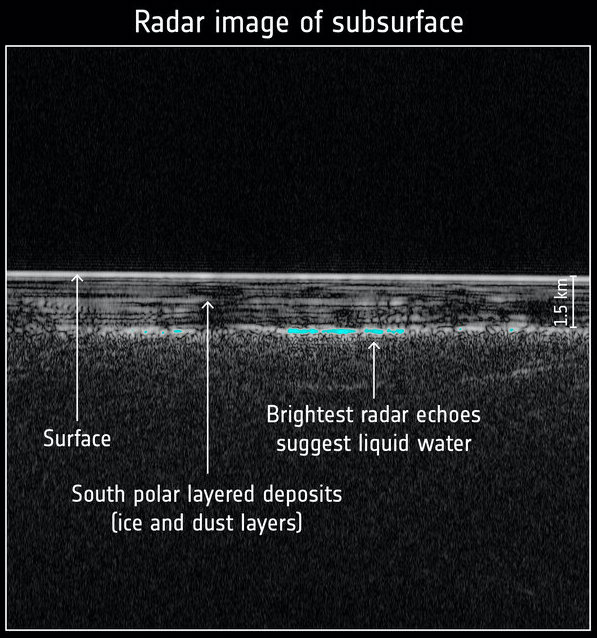 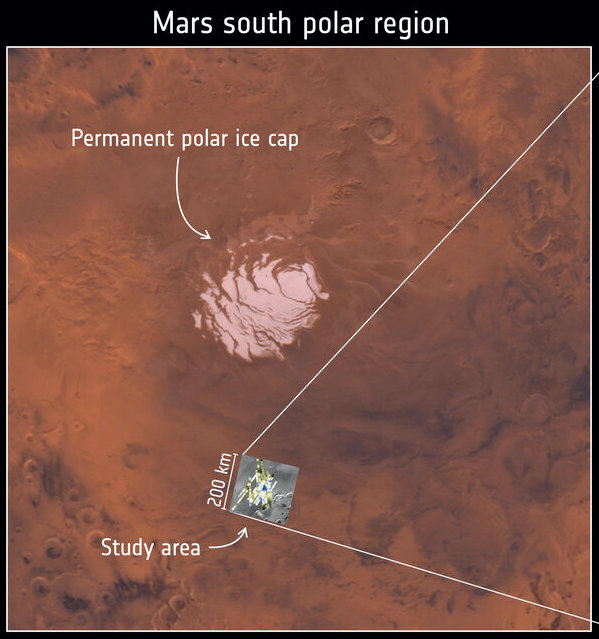 The location of the subsurface lakes near the south polar ice cap. Image via ESA/ NASA/ Viking (context map).

Scientists are doubtful that there is enough heat below the surface to maintain the lakes in liquid form, so that would mean they must be salty. Could life exist in these lakes? It would depend on just how salty they actually are. On Earth, life can exist in lakes that have up to five times the amount of salt as sea water. But lakes with salt content approaching 20 times are pretty much lifeless. According to Priscu:

There’s not much active life in these briny pools in Antarctica. They’re just pickled. And that might be the case [on Mars].

Pettinelli is a bit more optimistic however, saying:

There may have been a lot of water on Mars. And if there was water, there was the possibility of life.

The new findings support the previous discovery, and the scientists involved seem confident of their conclusions, but there are still some other scientists who are not convinced yet. As Mike Sori, a planetary geophysicist at Purdue University, said:

If the bright material really is liquid water, I think it’s more likely to represent some sort of slush or sludge.

Jack Holt, a planetary scientist at the University of Arizona, expressed a similar view:

I do not think there are lakes. There is not enough heat flow to support a brine here, even under the ice cap.

Holt is on the science team for the Mars Shallow Radar sounder (SHARAD) on NASA’s Mars Reconnaissance Orbiter (MRO). SHARAD has also been studying Mars’s subsurface, primarily to look for ice deposits. 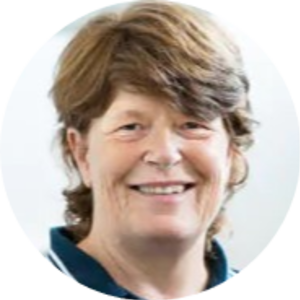 Elena Pettinelli at the University of Rome, one of the lead co-authors of the new study. Image via Nature Research Astronomy Community.

A definitive determination will require further observations. One possibility is the Chinese Tianwen-1 mission, which will reach Mars in February 2021. The mission consists of an orbiter, lander and rover, and the orbiter will be able to conduct radar observations of the Martian subsurface, similar to Mars Express. David Flannery at the Queensland University of Technology said:

Its capabilities are similar to MARSIS and SHARAD.

If the lakes really are liquid water, it’s possible that they are leftover pools from former seas or large lakes that used to exist on Mars’ surface. There is now abundant evidence, including from rovers such as Curiosity and Opportunity, that the Martian surface used to be dotted with numerous lakes, including salty ones. If there are subsurface lakes beneath the south pole (and north pole?), what about at lower latitudes and near the equator? It will be very interesting to see what additional observations reveal.