A new study of geologically young lava flows in Elysium Planitia suggests that Mars might still have residual volcanic activity below its surface. The finding could also correlate with seismic activity detected by the InSight lander in the same region and may have implications for possible Martian life. 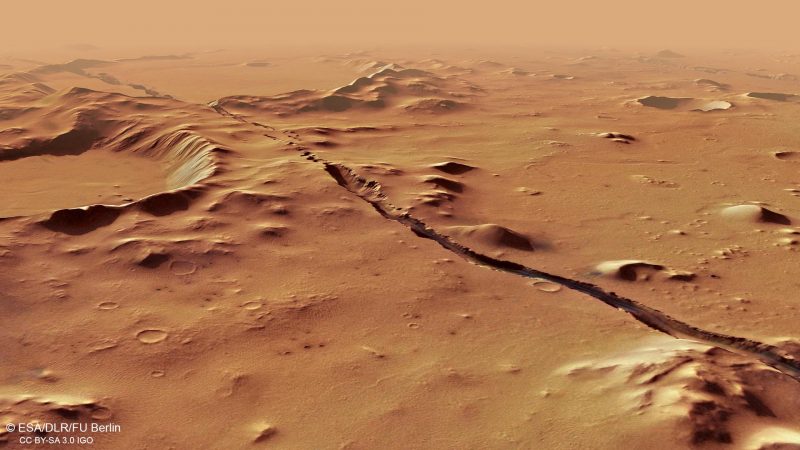 Oblique view of Cerberus Fossae, a tectonic fracture in the Elysium Planitia region of Mars. A new study of young lava flows surrounding it suggests that this area might still be volcanically active today, underground. Image via ESA/ DLR/ FU Berlin.

Mars has some of the largest volcanoes in the solar system, but they’ve apparently been inactive for millions of years. No plumes of ash or flowing streams of lava are seen on Mars today. But just how long ago were the last great Martian eruptions? That has been a matter of some debate among planetary geologists, and now scientists at the University of Arizona (UA) have announced new evidence for recent – geologically speaking – explosive volcanism in the Elysium Planitia region of Mars. According to the new findings, eruptions there may have occurred as recently as 53,000 years ago, which is a blink of an eye relative to Mars’ total age of about 4.6 billion years (same as Earth’s). According to these scientists, this finding could mean Mars is still volcanically active even today, at least underground.

Prior to this new work, the most recent eruptions known on Mars happened about 2.5 to 500 million years ago.

The intriguing findings were submitted to arXiv on November 11, 2020, for publication in the peer-reviewed journal Icarus. 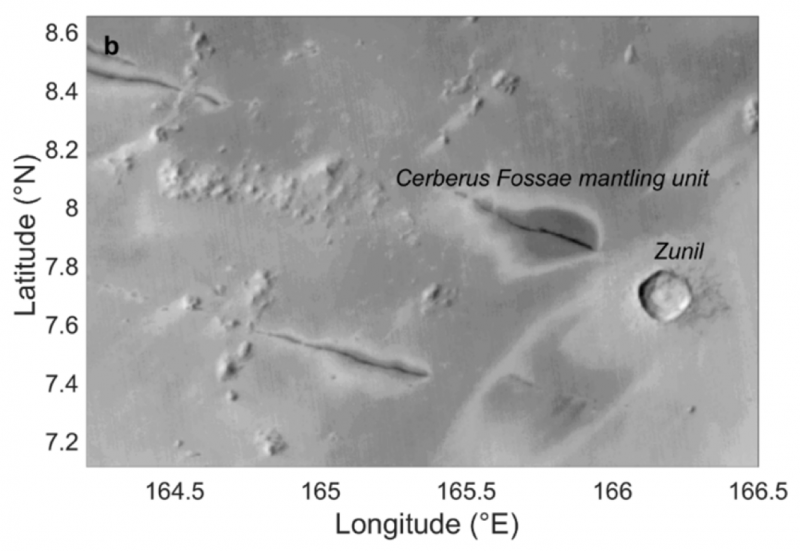 The evidence comes from the study of a volcanic lava deposit distributed symmetrically around a segment of the Cerberus Fossae fissure system in Elysium Planitia, called the “mantling unit.”

The researchers say it is probably the youngest such deposit yet found on Mars. It is similar to pyroclastic flows – fluidized masses of rock – on the moon and Mercury, but sits on top of older lava flows and has a thickness of tens of centimeters.

By counting the number of impact craters visible in the area, the researchers, led by David Horvath at UA, say these eruptions are estimated to have happened only 53,000 to 210,000 years ago. That’s like yesterday in geological terms.

Elysium Planitia is also where NASA’s InSight lander touched down on November 26, 2018. Since then, the probe has recorded hundreds of marsquakes in the planet’s subsurface with its Seismic Experiment for Interior Structure (SEIS) instrument, proving that Mars is still seismically active. As of last February, it was reported that over 450 seismic signals had been detected, up to the equivalent of magnitude 4 on the earthly Richter Scale. 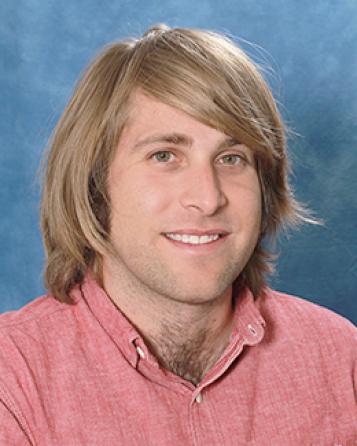 Some of those quakes were detected near or at Cerberus Fossae, the location of the young lava deposits. Could there be a connection? Mars doesn’t have tectonic plates like Earth does, so those quakes are more similar to those in the middle of continents on Earth rather than at plate boundaries. Whether there is any relation to current volcanic activity isn’t known, but based on the new findings of young lava flows, it certainly seems possible. From the paper:

Given the young age of the deposit, it is possible that the deeper magma source that fed the deposit could still be active today and could generate seismicity observable by the Seismic Experiment for Interior Structure (SEIS) instrument on the Interior Exploration using Seismic Investigations, Geodesy, and Heat Transport (InSight) lander (Lognonné et al., 2019). Seismicity related to magma transport and chamber pressurization has been linked to active volcanism on Earth (e.g., Battaglia et al., 2005; Grandin et al., 2012; Carrier et al., 2015). Magma-induced seismicity along rift zones can result in small to moderate earthquake magnitudes (Mw < 6). Dike-induced faulting and seismicity (Rubin & Gillard, 1998; Taylor et al., 2013) associated with this young magmatic activity is also possible.

There is also a possibility that current volcanic activity, if proven, could help explain the presence of methane in Mars’ atmosphere. Various telescopes, orbiters and the Curiosity rover have all detected the gas in small quantities, which on Earth is produced mostly by microbes as well as some from geologic activity. Scientists still don’t know the source of the Martian methane, but even if it is only from geological activity, that could still have implications for biology, since it would require liquid water-related chemical reactions (serpentinization) below ground. 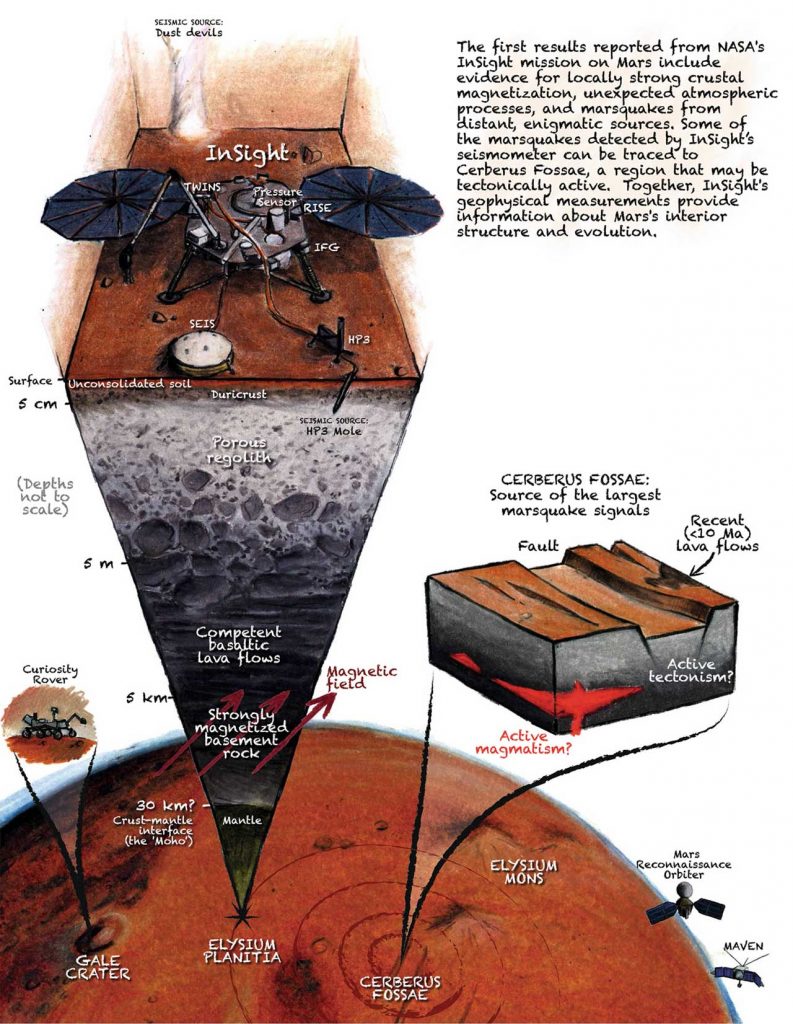 The landing site of NASA’s InSight lander in Elysium Planitia and its proximity to the tectonic fissure system Cerberus Fossae. The probe has detected hundreds of marsquakes, including near Cerberus Fossae, which may be related to subsurface volcanic activity. Image via J.T. Keane/ Nature Geoscience/ NASA. 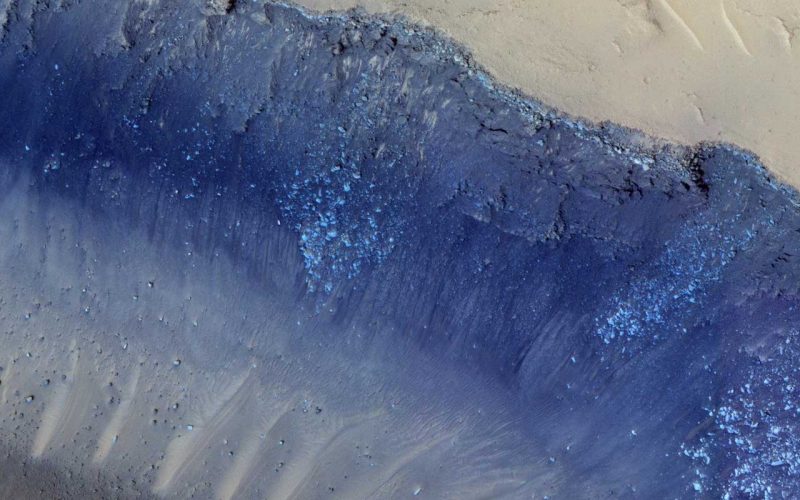 The possibility that Mars is still volcanically active is exciting, since it would overturn long-held assumptions that the planet has been geologically dead for the most part for billions of years. It could also create habitable environments below the surface for Martian microorganisms, which would be even more exciting. Mars may not be as dead or dormant as we thought it was, perhaps in more ways than one.