The results from NASA’s Mars InSight lander’s first 10 months on the Martian surface have been published in a series of papers.

Most space missions investigate the surface or atmosphere of a body. But NASA’s InSight probe, which landed on Mars in November 2018, is different. It is the first mission dedicated to studying the interior structure of the planet and whether it gives rise to “marsquakes.” Now the results from its first 10 months on the Martian surface have been published in February 2020 in a series of papers in Nature Geoscience and Nature Communications (see overview here). 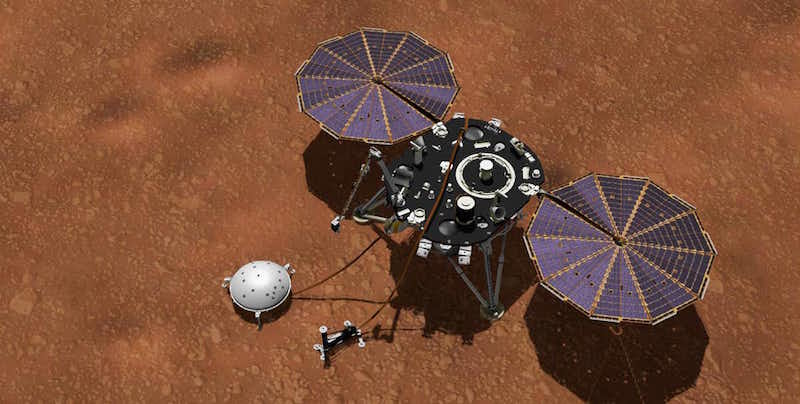 Artist’s concept of InSight on the Martian surface. The seismometer is under the white dome to the left of the landing platform. Image via NASA/ JPL-Caltech.

InSight touched down via parachute and retrorockets on the plains known as Elysium Planitia, lying between the ancient volcano Elysium Mons and Gale Crater where the Curiosity Rover is exploring. Although it is still trying to find a way to hammer its heat probe adequately into the ground, other aspects of InSight’s surface activities have worked well.

Seen from InSight’s fisheye camera, its seismometer lies undisturbed on the Martian surface under its dome-like wind shield, while nearby the robotic arm adjusts the digging instrument. Image via NASA/JPL-Caltech.

For example, it successfully managed the crucial operation of using a robot arm to place a seismometer (a very sensitive vibration detector) on the ground well clear of the landing platform, and then to cover it with a wind and thermal shield. This was to isolate it from vibrations caused by wind or the lander itself that could otherwise drown out any vibrations caused by quakes.

Up to September 30, 2019, 174 seismic events had been recorded. None was stronger than magnitude 4 on the Richter Scale, which is commonly used to measure earthquake sizes on our own planet. There were 24 whose magnitude was in the range 3-4, meaning the energy released would be similar to exploding about a ton of TNT. It might sound a lot, but would pose very little risk for future astronauts on Mars unless they were unfortunate enough to be very close to the epicenter of a quake.

The sound of the first detected marsquake, April 7, 2019, speeded up 60 times. In this extract, there is first noise from the local wind, then the seismic event itself, and the spacecraft’s robotic arm as it moves to take pictures.

Unlike the Earth, the outer layer of Mars is not broken into moving tectonic plates. It has therefore been suggested that vibrations caused by meteorites hitting the surface may be to blame for any marsquakes. But so far as can be told, the quakes were all generated inside the planet itself.

Though less strong than the biggest earthquakes that would be detected on Earth during any ten-month period, these marsquakes are a lot stronger than the moonquakes recorded by Apollo seismometers. And whereas moonquakes appear to result from the slow contraction of the moon, the situation appears different on Mars.

In the best determined events it was possible to distinguish two kinds of vibrations: first the compressional “p-waves” and then the slightly slower-traveling sideways-shaking “s-waves.” The time-lag between the two gave an idea of the distance from their source, and in two cases it was also possible to deduce the direction from which the vibrations travelled.

This placed the sites of those two marsquakes at or near Cerberus Fossae. This is an array of fractures where the crust – the outermost layer of a planet – has been stretched, possibly by volcanic activity, and which may also have been the source of some catastrophic water outflow. A previous study had identified boulders in this area that had apparently cascaded down slope as a result of recent marsquakes, already suggesting that this system is active. 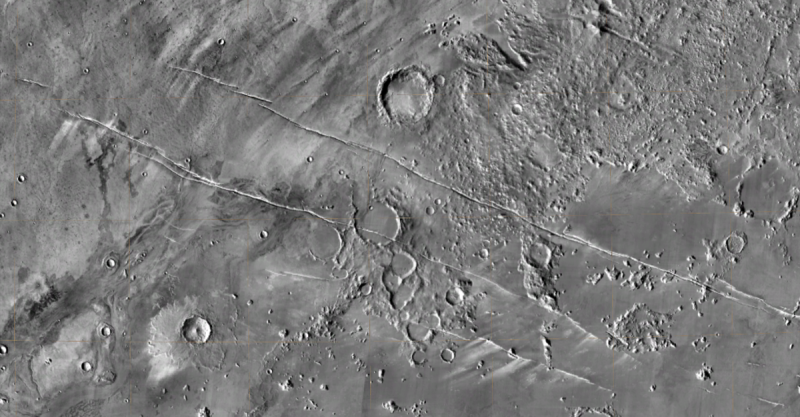 There can be no doubt now that Mars is seismically active. But this does not mean that it has plate tectonics like the Earth. Rather, Mars’ crust experiences stresses, caused by local deformation, leading to fractures similar to what occurs in earthquakes in the interiors of Earth’s continents, well away from plate boundaries.

As additional marsquake data accumulates, we will learn more about the exact locations of each event, and how they relate to what we can see in the surface landscape. In addition, the first evidence-based picture of Mars’s interior is beginning to build up.

We know that Mars has three distinct layers: the relatively thin rocky crust, a mantle and a metal core. But we know little about the state of the material in each of those layers.

The seismic waves from the smaller marsquakes appear to have originated within the planet’s crust, and to have travelled only within the crust. Beneath the lander, there are a few meters of regolith (loose rock) overlying solid rock in what is probably just the upper layer of the crust extending down to 5 to 7 miles (8 to 11 km). In an unexpected twist, some properties of the regolith were deduced from the details of how the ground trembles when a mini-tornado known as an atmospheric dust-devil passes by.

In contrast, the larger events probably began in the mantle. The paths of those seismic waves went deeper into the mantle before curving back up to InSight’s seismometer, giving a way to probe how the planet’s mantle varies with depth.

Already there are hints of a “low velocity layer” in the mantle where the s-waves are slowed down, possibly because it is not fully solid. There is nothing in the data yet that can help us explore the depth of the iron core that almost certainly lies at the planet’s center, but that may come.

Ultimately, a planet’s composition is determined by its formation, so uncovering Mars’ structure could one day help us understand how it formed.

Bottom line: NASA’s InSight lander is the first mission dedicated to studying the interior structure of the planet Mars and whether it gives rise to marsquakes. Now, according to a new series of papers from Insight’s first 10 months on the Martian surface, there can be no doubt that Mars is seismically active.