Maps of the long filaments of gas that hold the universe together might one day help trace and unveil dark matter. 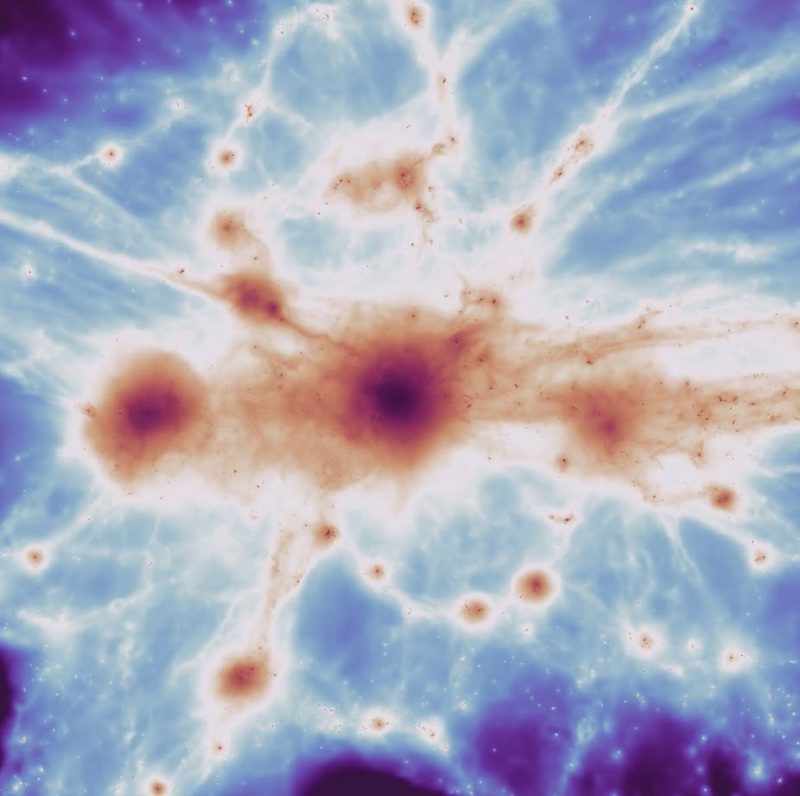 A massive galaxy cluster from the simulation, with filaments. Image via Joshua Borrow using C-EAGLE.

After counting all the normal, luminous matter in the obvious places of the universe – galaxies, clusters of galaxies and the intergalactic medium – about half of it is still missing. So not only is 85% of the matter in the universe made up of an unknown, invisible substance dubbed “dark matter”, we can’t even find all the small amount of normal matter that should be there.

This is known as the “missing baryons” problem. Baryons are particles that emit or absorb light, like protons, neutrons or electrons, which make up the matter we see around us. The baryons unaccounted for are thought to be hidden in filamentary structures permeating the entire universe, also known as “the cosmic web.”

But this structure is elusive and so far we have only seen glimpses of it. Now a new study, published in Science, offers a better view that will enable us to help map what it looks like.

The cosmic web provides the scaffolding of the large scale structure in the universe, predicted by the “standard cosmological model.” Cosmologists believe there is a dark cosmic web, made of dark matter, and a luminous cosmic web, made of mostly hydrogen gas. In fact, it is believed that 60% of the hydrogen created during the Big Bang resides in these filaments.

The web of gas filaments is also known as the “warm-hot intergalactic medium” (WHIM), because it is roughly as hot as the sun’s interior. Galaxies are likely to form at the intersection of two or more such filaments, where the matter is densest, with the filaments connecting all galaxy clusters in the universe.

So far, we haven’t been able to detect dark matter. This is because it does not emit or absorb light so it cannot be observed with usual telescopes. The cosmic web filaments are also very hard to find as they are very diffuse and they do not emit sufficient light to be detected.

Since the original prediction, there has been an intense search for the cosmic web, using a variety of methods.

One of these relies on bright objects that happen to lie in the background along the same line of sight as a gas filament. The hydrogen atoms in the filaments can absorb light at a specific wavelength in the ultraviolet. This can be detected as absorption lines in the light from the background object, when broken down into a spectrum by wavelength.

This method has been applied using quasars, which are very bright massive objects at large distances, and even with background galaxies.

Galaxies lighting up the web

The new study has managed to detect the gas in an entirely new way which allows two dimensional imaging of the cosmic web, rather than relying on the random location of a bright source behind the gas cloud used in absorption studies.

The object they studied, catchily named SSA22, is a proto-cluster, meaning it is a cluster of galaxies in its infancy. It is much farther away than previous measured bits of the cosmic web – its light travelled about 12 billion years to reach us. This means we are looking back in time to the early stages of the universe, allowing scientists to probe how the filaments first assembled. 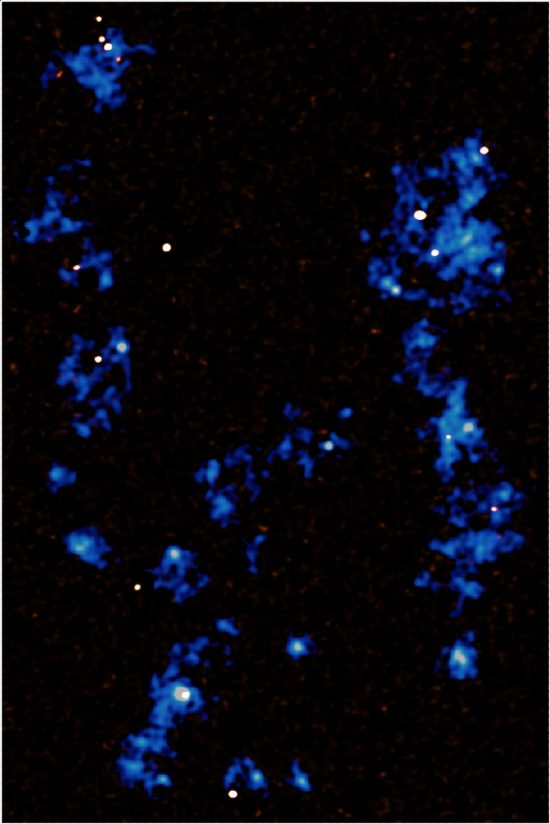 Map showing the gas filaments (blue) running from the top to the bottom of the image. The white dots are very active star forming galaxies which are being fed by the filaments. Image iva Hideki Umehata.

A few years ago, a number of extremely bright, star-forming galaxies called “sub-millimeter galaxies” were detected near its center. This new study has found 16 such galaxies and eight powerful X-ray sources, a rare over-density of such objects at this early epoch. The objects provide copious amount of ionizing radiation to all of the hydrogen gas of the filaments, which makes it emit light that we can detect – a technique that holds much more promise than absorption.

Another mystery that this study helps to solve is the formation of sub-millimeter galaxies. The most widely agreed on explanation is that they form as a result of two normal galaxies merging, hence forming a massive galaxy with double the amount of light.

However, computer simulations show that these galaxies can grow from the cold gas pouring in from the neighboring cosmic web. This scenario is confirmed by this new study.

The new study paves the way for a more systematic, two-dimensional mapping of gas filaments that can tell us about their motions in space.

Future studies help further map the hidden cosmic web. In addition to looking at galaxy clusters full of bright objects, we can also trace the web’s emission in radio or X-ray wavelengths. However, the X-ray traces much hotter gas than the bulk of the WHIM. The proposed Athena X-ray observatory will provide a full picture of the hot filaments around the clusters of galaxies in the nearby universe.

Another proposed mission for beyond 2050 is to use the cosmic microwave background – the light left over from the Big Bang – as a “background light” and look for fine imprints left in it by the cosmic web.

All these tools will reveal the entire structure of the cosmic web and provide us with a definitive census of the matter in the universe.

What’s more, we know that baryons settle in the dark matter filaments of the universe to make their own filaments, like foam over an existing wave. This means that detailed maps of the gas filaments can help us trace the more hidden dark matter structure and, ultimately, help us understand its mysterious nature.

Bottom line: Scientists are mapping the cosmic web that is the scaffolding of the universe.