Booms and fireball over California and Nevada on April 22, 2012 caused by large asteroid

The object’s estimated mass was around 70 metric tons. It broke up over the Sierra Nevadas, after creating loud booms and a blazing fireball, and even shaking some houses.

UPDATED APRIL 24, 2012 Discovery News is reporting that the source of the reports of loud booms and a bright fireball in the skies over Nevada and California on Sunday morning (April 22, 2012) has been confirmed as a small asteroid – mini-van-sized according to Ian O’Neill who wrote Discovery’s post. O’Neill said it slammed into Earth’s atmosphere:

… at a speed of 15 kilometers per second (33,500 mph), turning into a fireball, and delivering an energy of 3.8 kilotons of TNT as it broke up over California’s Sierra Nevada mountains.

He wrote that Bill Cooke, head of NASA’s Meteoroid Environment Office, created an estimate of the mass of the incoming object of around 70 metric tons. O’Neill wrote:

This was a fairly hefty piece of space rock.

POSTED APRIL 22, 2012 We’re getting reports and question from EarthSky’s Facebook and Twitter pages of a loud boom apparently heard in Nevada and California on Sunday morning (April 22, 2012). Some people in the two states reported seeing a fireball – a very bright “shooting star” – streak across the blue daylight sky at that same time. Many are saying that it was likely caused by a meteor, or piece of space debris entering our atmosphere, and there is no reason to think this is not the case.

Dan Ruby of the Fleischmann Planetarium at the University of Nevada, Reno, is reported widely as having said that the reports indicate the boom and fireball were caused by a meteor. If it was a meteor, it apparently broke up above Earth somewhere over the Sierra Nevadas. Astronomers in that area commonly would mount a search for a possible object on the ground – which would be called a meteorite – but I’ve heard nothing specific about such a search in this case.

Wikimedia Commons image of a bollide or fireball – a piece of space debris entering Earth’s atmosphere and causing a particularly bright streak across the sky. 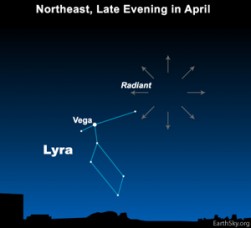 Yes, the Lyrid meteor shower is happening now – peak last night. But it likely had nothing to do with the bright fireball or boom on the morning of April 22, 2012. Read about the meteor shower.

Astronomers use the word bolide to describe an exceptionally bright fireball such as this one. The term bolide – which comes the Greek word bolis, meaning a missile or to flash – is particularly applicable when the object is so bright it can be seen in broad daylight, when the object explodes in the atmosphere and when it creates audible sounds. In other words, all of these phenomena are known to occur, and astronomers even have a word for it.

Among astronomers, it’s sometimes said you might witness one bolide, or very bright fireball, in your lifetime. So if you saw this one, this was yours! You might want to tell someone what you saw. Here’s a place to report your meteor sighting.

It so happens there is a meteor shower going on now, which peaked last night and might produce a sprinkling of meteors tonight. But it’s likely this bright fireball had nothing to do with the Lyrid meteor shower. Meteors in annual showers are known to come from icy comets, which, as they move through space, litter their orbits with debris. None of this debris ever reaches the ground because it starts out so small – like sand grains – and fragile (ice).

Sometimes in a meteor shower you will see a bright meteor! But I’ve never heard anyone speak of seeing a meteor in an annual meteor shower so bright that it might have been seen in daylight – or one that made a sound – or one that shook houses. If the object sighted today over California and Nevada was space debris, it was likely made of sturdier stuff than the icy grains that cause the Lyrid meteor shower.

Bottom line: Many in Nevada and California on the morning of April 22, 2012 saw a bright flash across the sky, and heard an audible boom, or explosion. Astronomers say it was a meteor, or piece of space debris entering Earth’s atmosphere. The object is now being called “a small asteroid” whose estimated weight was some 70 metric tons. It apparently broke up in the atmosphere. There is still speculation that some pieces might have fallen to Earth, in which case scientists might mount a search to locate the pieces.