There may be an ice cap at Pluto’s pole, as seen in the most recent images from the New Horizons spacecraft, now only 11 weeks from its historic flyby on July 14.

Notice the bright spot on Pluto at about 3 o’clock. That spot corresponds to the location of a pole on Pluto. Is the bright spot an ice cap at Pluto’s pole? We’ll soon know.

Members of the Pluto science team were excited today (April 29, 2015) during a NASA teleconference announcing the first detection by the New Horizons spacecraft of surface features on Pluto. The movie above shows Pluto’s moon Charon orbiting the dwarf planet, with surface features on Pluto clearly visible. The high-resolution LORRI – or LOng-Range Reconnaissance Imager – aboard the New Horizons spacecraft obtained the images to make this movie this month. Alan Stern, New Horizons principal investigator, said:

These images were … my ‘meet-Pluto’ moment … An emotional moment.

New Horizons has been journeying toward Pluto since 2006 and is now only 11 weeks from sweeping closest to Pluto on July 14, 2015. The science team said that we can expect even better images of Pluto in the weeks ahead.

One thing to notice already is that the brightness of the large moon Charon is not varying in the same way that Pluto’s is. So, even though we are not seeing surface features on Charon yet, the absence of brightness variations across Charon’s surface indicates its surface is different from Pluto’s.

Stern also noted that Pluto – much like the planet Uranus – has an axis of rotation that is tipped on its side with respect to the planet of the solar system. He said that in the new images, Pluto can be seen rotating on its side “like a chicken over a barbecue pit.”

Pluto and Charon are a double world, the only true double world beyond Earth ever visited by a spacecraft. The two worlds have a mutual orbit around each other. The movie at the top of this post is “Pluto-centric.” In other words, Pluto is shown as still so you can see it better, as Charon orbits around it. But, in this image as in reality, Pluto and Charon tug on each other’s positions in space as they orbit their common center of gravity. 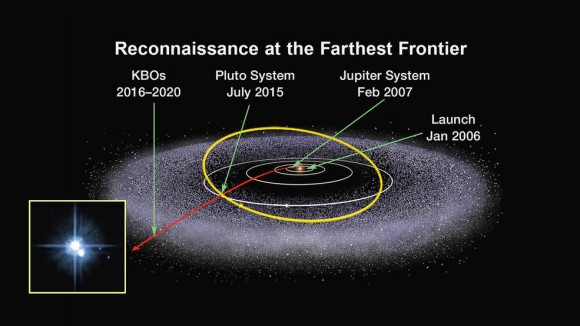 A timeline of New Horizons’ epic journey to Pluto and beyond. Image via NASA.

Stern noted with some surprise that we can already see broad surface markings on Pluto, and a wide range of reflected brightnesses (known as albedos to astronomers).

Notice that, as Pluto rotates, you’re seeing a changing brightness across its surface. But, in 3 o’clock position on Pluto, that part of the image always remain bright. That’s a pole on Pluto, and what we’re seeing here may indicate a polar cap.

After 114 months traveling toward Pluto – and just 2 months left to go before the Pluto encounter – Stern said he and his team felt:

… like ocean mariners. We can finally see the shore. 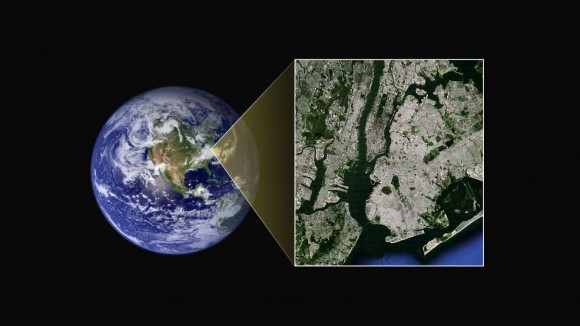 When New Horizons is closest to Pluto, it’ll be able to see details on Pluto’s surface similar to what we see in this image of Earth. The inset shows New York City. If you look closely, you can see Central Park – even some of the ponds in Central Park. We’ll see Pluto at this resolution in July, 2015. Image via NASA

Stern also commented that, by the time we reach Pluto in July, we’ll be seeing images that are literally thousands of times better than any seen so far. He added that the surface markings seen already on Pluto are a promising sign, saying:

It’s rare to see any planet in the solar system at this resolution displaying such strong surface markings. You wouldn’t see similar markings on Mercury, or Mars, for example, at this distance with the LORRI camera. That is very promising for the kinds of images we’ll see as we get closer to Pluto. We don’t know if the markings are caused by geography or topography … but those are just the kinds of questions we’ll be able to answer as New Horizons gets closer.

Bottom line: On April 29, 2015, at a NASA teleconference, the Pluto science team sounded very excited about the latest images of Pluto, which show surface features on Pluto’s surface.