The largest, oldest mass of water in universe

The cloud of water vapor – 140 trillion times more water than in Earth’s oceans – is more than 12 billion light-years away and surrounds the black hole of quasar.

An international team of astronomers has discovered the largest, oldest mass of water ever detected in the universe. The newly discovered cloud of water vapor, equivalent to 140 trillion times the water in Earth’s oceans, is more than 12 billion light-years from Earth and surrounds the huge black hole of a quasar.

This artist’s concept illustrates a quasar, or feeding black hole, similar to APM 08279+5255. Gas and dust likely form a torus around the central black hole, with clouds of charged gas above and below. X-rays emerge from the very central region, while thermal infrared radiation is emitted by dust throughout most of the torus. While this figure shows the quasar’s torus edge-on, the torus around APM 08279+5255 is likely positioned face-on from our point of view. Image Credit: NASA/ESA

University of Maryland astronomer Alberto Bolatto, who coauthored a new paper on the discovery, said:

A paper detailing the discovery has been accepted for publication in The Astrophysical Journal Letters. In the paper, Matt Bradford, a scientist at NASA’s Jet Propulsion Laboratory, said:

It’s another demonstration that water is pervasive throughout the universe, even at the very earliest times.

Quasars are the most luminous, most powerful and most energetic objects in the universe. They are powered by enormous black holes that suck in surrounding gas and dust and spew out huge amounts of energy. Bradford, Bolatto and their colleagues studied a particular quasar called APM 08279+5255, which harbors a black hole 20 billion times more massive than the sun and produces as much energy as a thousand trillion suns. 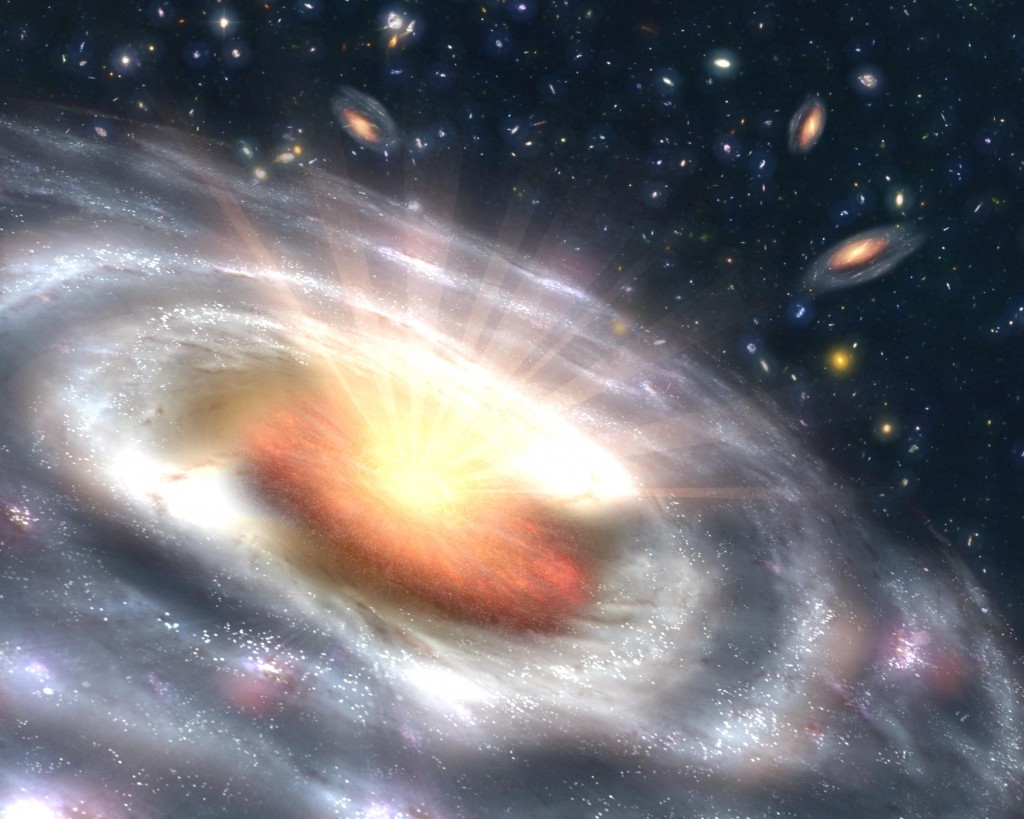 A growing black hole, called a quasar, is visible at the center of a faraway galaxy in this artist’s concept. Image Credit: NASA/JPL-Caltech

Scientists think water vapor was present even in the early universe, so the discovery of water is not itself a surprise. Our own Milky Way has water vapor. However, because most of the Milky Way’s water is in the form of ice, the amount of water vapor in our galaxy is 4,000 times less than the newly discovered water cloud around quasar APM 08279+5255.

This water vapor is an important trace gas that reveals much about the nature of this quasar. The water vapor is distributed around the massive black hole in a gaseous region spanning hundreds of light-years in size (a light-year is about six trillion miles). The gas is unusually warm and dense, but only by astronomical standards. Its temperature is minus 63 degrees Fahrenheit (53 degrees Celsius), and the huge cloud of water is 300 trillion times less dense than Earth’s atmosphere — still five times hotter and 10 to 100 times denser than what’s typical in galaxies like the Milky Way.

Measurements of the water vapor and of other molecules, such as carbon monoxide, suggest there is enough gas to feed the black hole until it grows to about six times its size. Whether this will happen is not clear, the astronomers say, since some of the gas may end up condensing into stars or may be ejected from the quasar.

In much the same way that physicians use different tests to make a diagnosis, the astronomers used two different instruments, “Z-Spec” and CARMA, to identify the presence of the oldest (and most distant) water yet discovered.

They first used the “Z-Spec” instrument (a 10-meter telescope near the summit of Mauna Kea in Hawaii) at the Caltech Submillimeter Observatory to detect the spectral signature for water vapor. This instrument measures light in a region of the electromagnetic spectrum
called the millimeter band, which lies between infrared and microwave wavelengths.

To confirm that what they’d found really was water, the astronomers used the Combined Array for Research in Millimeter-Wave Astronomy (CARMA). CARMA is a linked array of 15 radio telescope dishes perched high in the cool, dry desert of eastern California’s Inyo Mountains.

The CARMA array of telescopes in the Inyo Mountains of California. Image Credit: Palmtree3000

Bottom line: Researchers Alberto Bolatto, Matt Bradford and an international team of astronomers have discovered the largest, oldest mass of water ever detected in the universe, surrounding the black hole of quasar APM 08279+5255. The team confirmed the Z-spec telescope finding with CARMA. A paper detailing the study has been accepted for publication in The Astrophysical Journal Letters.

Read more at University of Maryland

14,000 quasars shine a light on the distant universe