The biggest fireball since the Chelyabinsk explosion plunged through the atmosphere over the Atlantic Ocean on February 6.

So far, there haven’t been any photos of the fireball over the Atlantic on February 6, 2016. This is a photo of the Chelyabinsk fireball, over the Urals early in the morning of February, 15 2013. The meteor exploded above Chelyabinsk city. This photo was taken by Alex Alishevskikh from about a minute after noticing the blast. Photo credit: Alex Alishevskikh/Flickr

The largest fireball since the Chelyabinsk blast in February 2013 was detected on February 6, 2015 at about 14:00 UTC over the southern Atlantic Ocean.

NASA listed the event on its Fireball and Bolide Reports webpage.

Because the event happened in the middle of the ocean, the fireball probably went unnoticed and not caught on camera. It burned up about 31 kilometers (19 miles) above the ocean surface, about 1,850 kilometers (1,150 miles) off of the Brazilian coast. 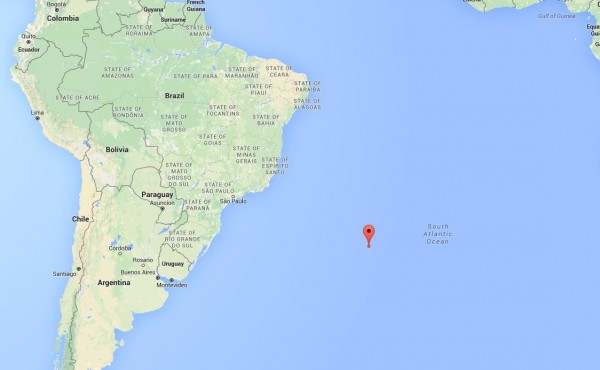 Data released by NASA shows that the meteor released an energy equivalent to 12,000 tonnes (13,000 tons) of TNT, and it was moving at over 15.5 kilometers per second (9.6 miles per second). It had a diameter of about 7 meters (23 feet), calculated based on its kinetic energy.

The February 2013 Chelyabinsk impact was 40 times more energetic and released 450,000 tonnes (500,000 tons) of TNT. That event injured more than 1,000 people, mostly due to windows breaking. If this recent event had happened over a populated area, it would have at most rattled some windows and scared a few people, according to Phil Plait at Slate.

Bottom line: The largest fireball since the Chelyabinsk blast in February 2013 was detected on February 6, 2015 at about 14:00 UTC over the southern Atlantic Ocean.